Lexus, With Some Help From Wii, Takes Center Court

The U.S. Open may be all the way in Queens, but with the help of Lexus all those without tickets to the tournament could get in on some tennis action in the Big Apple.

Passersby and contestants at the Lexus Virtual Open could pose with a giant tennis ball.
Kiosks framed a large white tent sporting brand logos in Rockefeller Center, in Midtown Manhattan. In the center of the tent, carmaker Lexus re-created a miniature version of Arthur Ashe Stadium for virtual tennis players (courtesy Nintendo's Wii platform) to try their hand at winning tickets to the men's or women's finals and a one-year lease for the 2008 Lexus IFS, which won't be on sale until early 2008. Lexus even placed its logo on the roof of the court so anyone looking down from the Top of the Rock or nearby buildings couldn't miss the event's sponsor.

"What we wanted to do is to extend the [brand's] reach in Manhattan," said Vince Salisbury, auto shows manager, Lexus marketing.

A charitable cause, too
But this wasn't just about a contest; Lexus donated $1 for each serve hit during the virtual tournament to the Andy Roddick Foundation, a player the brand sponsors. To qualify, contestants had to return as many consecutive serves as possible, and the top 128 players would compete against each other tomorrow.

Contestants started registering to play at 7:30 a.m. As they waited to play against a computerized opponent using the Wii, they could either take a photo with a huge Lexus tennis ball or take a gander at the cars on display. Unfortunately, none of the vehicles on location were the grand prize. Those who wanted a peek at the Lexus IFS had to hop on the No. 7 subway train to Flushing to get to the actual tennis tourney to see it. 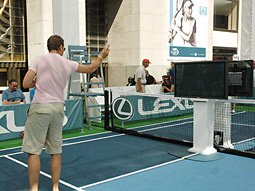 Getting ready to serve against a virtual opponent, courtesy Nintendo's Wii.
Ultimate tennis fans also had a chance to meet 1993 French Open doubles winners Luke and Murphy Jensen, who were the event's commentators. Each took turns sitting at the high referee's seat at center court and gave not only colorful commentary but a few tips to contestants.

Brand experience
Believing in giving consumers the brand experience, Lexus thought using the Nintendo Wii's popularity and the U.S. Open (which Lexus has been sponsoring for three years) would bring in a new consumer base as well as reach a younger demographic.

"We're focusing brand experiences," Mr. Salisbury said. "We want to publicize the new vehicle and just have an engaging atmosphere. This is really an opportunity to do that."

Amy Hirsch, who attended the event with her family, thought the event was a good way to promote the vehicle as well as the U.S. Open and the Nintendo Wii. "I think it's a perfect day," said Ms. Hirsch of Linwood, N.J., where residents are much more likely to own a car than those in Manhattan. "People have tennis on their minds. You can play the Wii and maybe win a car, too."