Feeling sleepy this Monday, or maybe by midweek you just get rundown in your stuffy cubicle? Pepsi hopes to cure your yawns, as you've probably seen in its latest ads for Diet Pepsi Max. 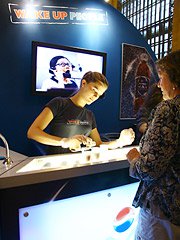 A Diet Pepsi Max Sample Girl pouring out a shot of the ginseng and caffeine soft drink.
But an ad is one thing, so Pepsi set up shop at Grand Central's Vanderbilt Hall with its newest soft drink to see if it could rouse sleepy-eyed New Yorkers and out-of-towners last week.

Extending campaign
Extending its "Wake Up People" campaign, those passing the Diet Pepsi Max Wake Up Station were treated to the drink, served in plastic Pepsi shot cups, to discover what ginseng and more caffeine than a cup of coffee could do.

The station looked more like a mini club bar, equipped with bright white and blue lights, a large flat screen showcasing its new TV spot and endless bottles of Diet Pepsi Max. It also had a number of misters (that couldn't be used indoors) that sprayed people with water (not Pepsi) to wake up their senses. 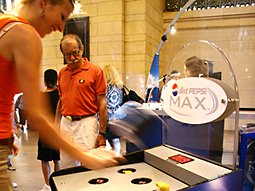 One passer-by tries her luck at Whack-A-Yawn.
After sampling the drink, people could test their hitting skills at a Whack-A-Yawn game (think old-school Whack-A-Mole). For those who enjoyed gaming, there was Squirt the Yawn, in which players shoot Diet Pepsi Max into people's mouths while they yawn using a Pepsi-bottle-shaped control. Those who scored high in either of the games were rewarded with a "Wake Up People" T-shirt, which all the brand reps wore at the event. Coupons and magnets were also handed out at the event.

Planning for the event started in April with Boulder, Colo.-based Action Marketing Group. The event, which started in July and lasts eight weeks, has been traveling to the six major markets -- Boston, Chicago, Denver, Detroit, Los Angeles and New York.

Drawing the curious
Although Grand Central is normally a hub for travel, people couldn't resist stopping by the station to play the games and, of course, try the drink. "This is the first in touch I've been with Diet Pepsi Max," said Constanze Sand, 28, of New York. "A lot of people are moving by here. It's a great location and the drink is good."

Taking a shot at the Squirt-a-Yawn game.
Feedback about the event has been positive so far, said Erica Pergament, associate brand manager, Diet Pepsi Max. "Consumers have been telling us how excellent Diet Pepsi Max tastes and how much fun they have been having at the sampling events," she said. "The events have been a huge success and a great way to kick off the launch of Diet Pepsi Max."

But there were still others who said they were loyal to other soft-drink brands. "I don't normally drink Pepsi, but it's good," said Caroline Vandenberg of Canada. "But I'm a Coke drinker, and I'll never switch."