Rolling the Dice on a Vegas-Style Promotion for HGTV 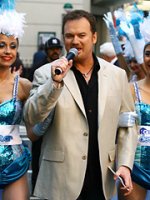 'Design Star' host Clive Pearse
In Vegas there's a hotel and casino called New York-New York that includes replicas of the Brooklyn Bridge, the Chrysler Building and Statue of Liberty -- and has a working roller coaster to show you the sights. In a turn of fair play, Scripps Network's HGTV decided to turn the Big Apple's Herald Square into the Las Vegas strip.

Complete with showgirls in sequins and feathers (but no roller coaster), passers-by could walk down a blue carpet and try their luck at a round of roulette or a game of blackjack, where winners received a deck of Design Star cards. There was a HGTV backdrop where people could strike a pose or even have their picture taken with Elvis.

Plenty of meet and greet
And for those die-hard fans of "Design Star" there was a chance to meet the new season's cast members, the judges, the show's host, Clive Pearse, and the first "Design Star" winner, David Bromstad. Anyone who was a "Design Star" fanatic didn't miss snagging a snapshot with the latest HGTV star or grabbing an autograph.

When the whistle blew beginning the challenge, pillows and chairs started flying.
But the event wasn't just about Vegas. It also showcased the cast of season two. Mr. Pearse introduced each of the contestants, who, as they appeared, "levitated" (thanks to an unstable-looking motorized lift) behind a mountain of blue and white furniture that was constructed at 3 a.m. on the day of the event.

Once everyone was introduced, the cast was given their first mini-challenge -- to build a serenity corner in 25 minutes using furniture and tools supplied by Sears. The contestants were divided into two teams, and at the whistle's sound, pillows and chairs started flying. When time expired, Mr. Bromstad chose the winner -- Team B, composed of Scott Corridan, Josh Foss, Neerja Lockhart, Lisa Millard and Will Smith. 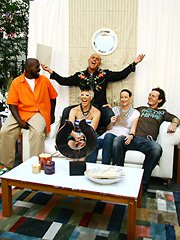 The winning members of Team B celebrate in their serenity corner.
Building buzz for the big show
"'Design Star' is our biggest event show," said Mike Boyd, senior VP-marketing, HGTV. "It's about building buzz. Because it's a show about nature, it's one of the fun opportunities to do something like this."

Along with passers-by and fans of the show, contestants' families also came to lend their support during the day-long event. "It's fantastic. She's very inventive," said Lee Millard, Lisa's husband. He said she made her wedding dress out of 40 rolls of wax paper. "She'll probably succeed."

Ms. Millard's older sister, Kristy Romig, said the network did a good job letting people know about the show with the event. "I think they're promoting it very well," Mrs. Romig said. "It's getting people more in tune with what HGTV does."