Why 'Mad Men' Has So Little to Do With Advertising

Ratings, Ad Revenue Small, So Focus Is on Overseas Sales, Digital and -- Maybe -- a Song-and-Dance Revue
READ THIS NEXT
The 'Mad Men' Prop Auction: 5 Items You Need At Your Agency
'Mad Men' characters Roger Sterling and Don Draper.
Credit: AMC
NEW YORK (AdAge.com) -- On cable's "Mad Men," characters such as Don Draper and Roger Sterling eat and breathe advertising (as well as red meat and liquor). Without ads, after all, they'd be out of business.

Yet "Mad Men" isn't a particularly huge draw for advertising itself, despite plenty of interesting tie-ins with marketers such as BMW and Jack Daniel's whiskey over its three-plus seasons. Airings of "Mad Men" took in only $1.98 million in ad revenue in 2009, according to Kantar Media. In 2008, the show nabbed just less than $2.8 million, and in 2007, approximately $2.25 million. These are paltry amounts when one considers that a 30-second ad in an equally buzzy program such as "24" on Fox cost between $200,000 and $280,000 as the show, off its peak, headed into its final season.

Despite the meager ad sums -- and a small audience for its first-run episodes -- "Mad Men" is an important program. Mr. Draper, Mr. Sterling and their cohorts aren't just trying to keep marketing clients happy. They are also carrying aloft an economic model for TV production that grows in importance as more cable outlets test their hand at edgy dramatic fare.

TV's new formula
Programs such as "Men of a Certain Age" and "The Glades" are supposed to help cable compete with broadcast counterparts. In turn, those programs help cable push for the greater subscription and programming fees that keep its business stable. Under this emerging formula, TV networks and show producers must make do with smaller audiences and then work more furiously to secure every dollar that comes from merchandising, digital viewing, DVD purchases and international sales.

Advertisers will "only pay so much" to be in high-quality programs such as "Mad Men," said Kris Magel, exec VP-director of national broadcast at Interpublic Group of Cos.' Initiative, because its traditional TV reach is limited. "Once that cost hits a ceiling, the network has to make a decision: Can they afford to continue to make the show for the amount of revenue it generates?" he asked. "Sometimes they do, because the halo generated for the network as a whole and its other programs outweighs the expense. And sometimes they can't."

TV critics have lavished praise on "Mad Men," which revolves around the aforementioned Mr. Draper. Set in the 1960s, "Mad Men" depicts ad-agency executives grappling with account management and personal drama even as modern -- and more permissive -- American culture starts to rear its head. The Plain Dealer of Cleveland is pleased the show features "characters at an intersection where Madison Avenue crosses awakening sensibilities." And The Baltimore Sun praised the use of complex figures like Mr. Draper who "come to stand for such an important part of our collective history and national psyche."

Low ratings
Despite the critical acclaim, the program, which is found in bursts of 12 or 13 episodes each summer on AMC, draws a minuscule audience. The 2.9 million viewers who tuned into its fourth-season premiere on Sunday, July 25, are no match for the legions who tune in to CBS's "NCIS" (17.3 million on average, as of July 25) or even ABC's "Modern Family" (8.7 million). Cable's most-watched dramas -- stuff such as "The Closer" or "Rizzoli & Isles" on TNT -- have in recent weeks drawn a live-plus-same-day audience of around 7 million, according to Nielsen.

The average viewership for "Mad Men" -- 925,000 for first-run episodes in 2007, 1.51 million in 2008 and 1.81 million in 2009, according to Nielsen -- would get it canceled if it aired on any broadcast network in prime time. Of course, a significant chunk of the show's audience may watch days or weeks later with a digital video recorder, through iTunes or by buying the series on DVD.

That broader "after-TV" audience keeps "Mad Men" coming back to the TV screen each summer. Just as the executives at Sterling Cooper Draper Pryce try to help their clients sell Lucky Strikes and Glo-Coat to the masses, so too do they attempt to bolster both AMC, which airs the program, and Lionsgate, the show's production studio.

Each episode of "Mad Men" costs approximately $3 million to produce, estimated Sandra Stern, Lionsgate Television's chief operating officer, owing to the show's large cast and the producers' attention to the smallest historical details. To cover part of its costs, Lionsgate depends on a license fee paid to it by AMC. The licensing cost of a high-end drama could come in between $2 million and $3 million per episode. Meanwhile, Ms. Stern estimates Lionsgate is able to secure "slightly north of" $500,000 per "Mad Men" episode by selling it to international distributors. Digital revenue, DVD sales and merchandising add more dollars to the coffers, though some of those monies are shared with AMC.

While the revenue that comes in isn't on par with what a broadcast-network crime procedural might generate, she said, "We declare success and victory with a much smaller audience." 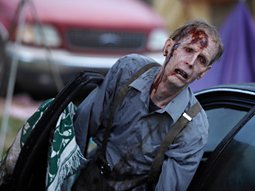 'The Walking Dead'
From old films to new drama
AMC also has reason to keep "Mad Men" on the air. The cable outlet, once known for showing older films with limited commercials or even without commercials at all, has over the past decade worked to modernize itself. In the earlier part of the last decade, it started showing contemporary movies that some may not have immediately labeled "classic" -- think 1987's "Desperately Seeking Susan" instead of "Casablanca." More ad breaks began to surface. While the channel has run scripted drama in the past, the introduction of "Mad Men" marked a significant step forward. Other shows, including the critically acclaimed "Breaking Bad," followed. Now there's a zombie series, "The Walking Dead," and a Western drama, "Hell on Wheels," in the works.

While ad dollars placed against "Mad Men" may be small, AMC's use of the program can help it win more revenue from other sources. Since "Mad Men" arrived, the amount AMC gets paid by cable and satellite operators per subscriber has increased to 24 cents from 22 cents, according to SNL Kagan. Before the show debuted, that fee had declined to 21 cents in 2006 from 22 cents in 2005. The channel is available in more than 95 million homes.

"Mad Men" has "raised the game for our brand," said Charlie Collier, president-general manager of AMC, which is part of Cablevision Systems' Rainbow Media Holdings. The program "has absolutely raised our ability to monetize the network," he added.

Up next is an effort to turn "Mad Men" into merchandise, said Lionsgate's Ms. Stern. Already, the company is exploring ways to extend the show into cocktail culture and furnishings, even clothes.

And a one-time promotional idea -- Lionsgate has in the past enlisted the "Mad Men" cast to sing as part of a "Mad Men Revue" -- might have potential over time, she said.