Why 'Mad Men' Needs to Embrace More Advertising, Not Shun It | Ad Age
Skip to main content
Sign In Register

Why 'Mad Men' Needs to Embrace More Advertising, Not Shun It

Tuning In: Clever Show Needs to Consider Its Business Plan
READ THIS NEXT
The 'Mad Men' Prop Auction: 5 Items You Need At Your Agency
'Mad Men'
Credit: AMC

You'd think the people who write a show ostensibly about the advertising industry would want to have more to do with it, not less. 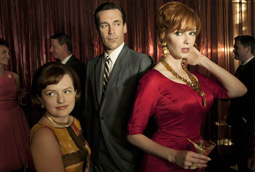 Tongues are aflutter this week over the inevitable delay in getting the fifth season of "Mad Men" up and running on AMC, which said Tuesday that the show will return for a fifth season -- but not until early 2012.

At issue in the ongoing negotiations, according to reports: AMC wants to shorten the time allotted to content ("Mad Men" gets a few more minutes per episode than most TV shows) and devote those minutes to advertising. More product placement may also be in the wind. And AMC wants producer Matthew Weiner to cut the show's budget, which could result in a reduction in the number of cast members.

On the surface, these demands could sound like a money-focused corporation trying to keep costs down, no matter what such requirements do to a beautiful piece of content.

But you know what? The fact of the matter is that "Mad Men" ain't cheap to produce, doesn't bring in the level of advertising revenue a much-buzzed-about show ought to and has in recent years been borderline unprofitable if you take out international sales and other content extensions.

Relatively low ad revenue for "Mad Men" reflects its relatively modest ratings . For all the hoopla surrounding it, "Mad Men" brings in a rather small audience for its first-run episodes. Just 2.9 million tuned in to watch its fourth-season premiere last year; CBS's "NCIS," not nearly as critically lauded as "Mad Men," typically brings in anywhere from 17 million to 20 million viewers each week. To turn a bigger profit on the program, the show's studio, Lionsgate, has depended on DVD sales and sales of the show to international markets.

And as "Mad Men" ages, its economics could get tougher for AMC to digest. One way Lionsgate can try to make more money off the program is by raising its license fee, no doubt a topic of discussion in the negotiations to keep it on the air. Actors' salaries -- particularly those playing must-have characters, i.e. Jon Hamm's Don Draper -- could also be on the rise.

There's no denying that "Mad Men" has helped AMC transform itself from a second-tier cable outlet known for showing old John Wayne and Arnold Schwarzenegger movies into a place for high-quality drama. After beginning "Mad Men," AMC also added "Breaking Bad" and "The Walking Dead." As AMC grows, however, it likely will look to have more of a hand in the production of the shows it runs, thereby keeping more of the ancillary revenues from the programs it airs. Because it comes from an outside studio, "Mad Men" may actually be less economically attractive to AMC, which would have to push and prod to gain any sort of direct revenue from it other than advertising.

It's also true that "Mad Men" has helped AMC bring in more money from cable and satellite operators, which pay cable channels for the right to carry their signals. Yet with more original shows coming on AMC's schedule, "Mad Men" becomes just one among several content options, not the sole bright light. With a production cost of around $3 million per episode (it's not inexpensive to give the show its authentic late 1950s-early 1960s look), "Mad Men" may be a beautiful gem, but one that doesn't come in at wholesale prices.

The older "Mad Men" gets, the more expensive it becomes to keep it alive. Mr. Weiner might want to take a gander over at TNT's "Southland," a critically acclaimed cop drama that has had to shed much of its starring cast -- the program now features just four actors in its main credits -- in order to keep afloat. TNT is keeping the show on air, and the program continues to garner critical acclaim (though we'd like to tune in next season to see if it can keep its edge with so few primary actors).

The people who make "Mad Men" may think they've done something special, and from a creative viewpoint, they have. But the people who run the media outlet that airs "Mad Men" have to take more than creativity into consideration. They have to figure out whether putting "Mad Men" on the air will help them make money.

~ ~ ~
Tuning In is an ongoing series of commentaries by Ad Age TV Editor Brian Steinberg on the TV schedule, the ads it carries and changes within the industry. Follow him on Twitter.