Don Makes an Ad for Death, Peggy Leans In as the Late Sixties Bloom
READ THIS NEXT
The 'Mad Men' Prop Auction: 5 Items You Need At Your Agency

It begins in an emergency. An urgent point-of-view shot shows an unfamiliar face performing CPR on an unknown patient acting as our eyes. We hear the thumping chest compressions and the screams of a familiar voice. 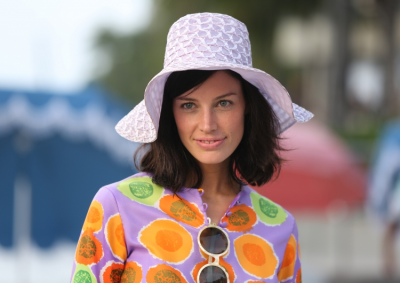 Have the smokes, the Old Fashioneds and the soul-hardening stress of a life spent lying finally caught up with Don Draper? Don's death has been foreshadowed any number of times, but this seems far too soon to remove the hard-living anti-hero at the center of "Mad Men." There are two seasons to go.

The abrupt change in setting to Hawaii should be a clear indication that Don is still very much in this world, but the gorgeous, languorous 10-minute sequence that opens the show's sixth season is still too dreamy to ground anything. Don's beach read is Dante's "Inferno," but maybe that's the wrong flavor of afterlife. Perhaps it's "Paradiso" we are in. Contributing to the unreal feel is Don's silence as a rather pleasurable business trip plays out around him. Neither pot, nor poi, nor poking pulls any words from Don's lips. It is only a late-night encounter with a drunk, pre-nuptial serviceman, whose idea of bar chat is musing on what a 50-caliber machine gun can do to a water buffalo, that fully brings us into the reality of December 1967.

Though only about half a year has passed since the action of season five ended (you can read the recap of last season's finale here) we've crossed a historical threshold. The late 1960s are in full bloom. Beards, mustaches, and sideburns have been grown out. Pot smoke flows freely through the expanded office of Sterling Cooper Draper Pryce. Visually, the show's palette has brightened, even if the world it chronicles continues to darken. New York City has become a crime-ridden squat for anarchist runaways, and foreign affairs are no better, with the Vietnam War continuing its military escalation and moral decline.

It is against this grim backdrop that we reacquaint ourselves: Roger Sterling back from his acid trip, Peggy Olson leaning in at her new agency, Megan seeing her TV star on the rise, and Betty Francis, Don's ennui-ridden ex, imagining child-rape fantasies for her husband, finding out what it's like to be a mother in the late 1960s, and, in the show's best hashtag opportunity, taking her hair color to raven.

For brands, it's all about finding their place in a culture on the move. Headphone-maker Koss turns up as a fretful Super Bowl advertiser, wondering if a recent "Tonight Show" bit on some G.I.'s making gruesome necklaces out of Viet Cong ears has rendered its tagline -- "Lend Us Your Ears" -- tasteless. Peggy, still with Abe and learning the balance between manager and human, find Koss a solution, even if the client is being oversensitive.

Another brand in the episode could have used a bit more sensitivity in those days: Dow Chemical. It's shown in the season six premiere for its no-fumes oven cleaner, but in the late 1960s it was getting more attention for a different product, Napalm, in a PR nightmare that we'll discuss later. "Love is in the Air," a hapless tagline for the cleaner, seems a subtle jab a key Napalm product feature: It literally sucks the oxygen out of its victims' lungs. 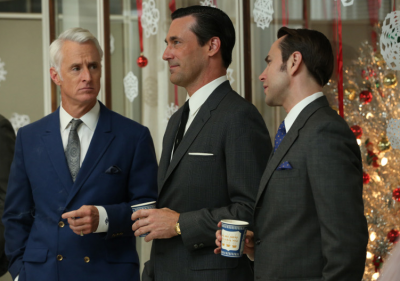 Morbidity and mortality have been at the center of "Mad Men" for some time and Sunday's two-hour premiere did not deviate.

Don's character is the place where love and death collide, an embodiment of the pleasure principle that comes out nowhere more clearly than his creative sensibility. In one of his trademark critiques, he feels the Dow ad plays too lightly with the use of the word "love," literally using the Freudian appropriation of eros: "We want that electric jolt to the body. We want eros. It's like a drug; it's not domestic." Then in one of the premiere's finest moments, his presentation for the Royal Hawaiian Hotel, Don goes way off-brief: He has made an ad for death. The proposed creative features a scene -- a suit left on the beach and footsteps leading into the -- that reminds the Sheraton executives of suicide.

Don: "Maybe he did and he went to heaven."

Client: "It's a little morbid."

Don (impatiently): "Well, heaven's a little morbid. How do you get to heaven? Something terrible has to happen."

Yes, Don is talking about the ad but his real subject is himself. His life -- his beautiful wives and children, his luxurious apartment, his business trips to Hawaii -- was birthed by something that could only be described as terrible. The transformation of Dick Whitman, child of a Great Depression-era whore, into a twisted figure of the American dream is made possible only by the actual death of the real Don Draper in the Korean War. It's a fact we're reminded of by Don's chance but ominous encounter with the private in Hawaii. Don gives away the stranger's wife and their military-issue lighters get switched, a low-grade case of mistaken identity reminding us of the big one that Draper/Whitman just can't repress.

But Draper and the gang aren't just living in the shadow of death, as Sterling reminds us. "We sold actual death for 25 years with Lucky Strike," says a perturbed Roger after the awkward Sheraton meeting. "You know how we did it? We ignored it."

It'd be easy to interpret Don as some personification of Freud's pleasure principle, but "Mad Men" is way too smart to recycle Psych 101 concepts. As a counterpoint, we get the brilliance of Roger Sterling, who spends a good chunk of the episode on the couch jawing with a therapist of some sort. The death of his mother reminds us that Mrs. Sterling, like Freud's own mom, was a doting figure who essentially replaced her own dead husband in her affections with her son. It's a set-up for Oepidal drama that Roger denies. "My mother loved me in some completely pointless way and now it's gone," he tells the shrink.

We are not, however, left to choose between Don's will to believe in paradise and Sterling's blithe nihilism. Adding a third view is Dr. Arnold Rosen, a new character who's a neighbor and friend to the Drapers. It is his face we see in the opening shot. It's later revealed that he has revived a doorman who had collapsed into a near-death experience. Don, after puking at Mrs. Sterling's memorial, drunkenly asks Jonesy what he saw on the other side. He hopes it's like Hawaii. Obsessed as Don is, this question isn't interesting to Dr. Rosen.

"The whole life and death thing doesn't bother me, never has," he tells Don after a snowy New Year's Eve get-together. Rosen is strapping on skis in the middle of the night so he might go take care of an emergency. "You get paid to think about things they don't want to think about. I get paid to not think about them. People do anything to alleviate their anxiety."

He might as well be interpreting Don's next move, which is to steal into Dr. Rosen's bedroom and answer the holdover question from last season: Has Don, ever the philanderer, found contentment with Megan? The answer is unambiguous, but the details of Don's affair with Sylvia Rosen are left vague. We know that she gave Don the copy of Dante he was reading in Hawaii and we know that she doesn't exactly have a hold on Don's heart. His New Year's resolution: "I want to stop doing this."

The episode ends with a glance at the New Year's Day edition of The New York Times. "World Bids Adieu to a Violent Year," reads a headline. Violence, we know, isn't the past but the future. Within a month the Tet Offensive will turn the tide against the war. In half a year, Martin Luther King and Bobby Kennedy will be dead. Will another mad man join those great men in paradise or whatever passes for it?

After all, something terrible has to happen.

In "Mad Men," Koss buys into the second Super Bowl, but there is no record I could find of the company advertising in the big game. Koss started as a TV rental business in 1953 and debuted its stereo headphones five years later, not in the late 1960s as the show suggests. Koss went public in 1967.

Appearing in Super Bowl II, during which Green Bay disposed of Oakland, would have cost Koss about $50,000 for 30 seconds, or about $340,000 in 2012 dollars. You probably don't need to be reminded that Super Bowl ad rates have risen much faster than inflation, not to mention the S&P, and now cost on average $3.5 million. Still, the price jump between the first two Super Bowls was the biggest by percentage ever, growing by 35%, albeit on a small base. Average year-over-year growth has been about 10%.

Dow is the butt of some of the episode's jokes, but back in late 1967 there probably wasn't much jollity at the chemical maker's HQ. When it's suggested that the oven cleaner ad be transformed from suburban tranquility to something more hip, someone quips, "A couple of long hairs in love, that'll get Dow going."

In reality, Dow was taking a pounding from the anti-war movement. In November, just a month before the action of the show takes place, Dow chairman used a business writers conference to announce that the company was, according to an AP report, "hurt by a boycott of consumer products… hurt by people saying they should sell our stock." Carl Gerstacker defended the manufacturer of weapons for American troops, but by 1969, Dow got out of the Napalm business.

Writing in New York magazine, Matt Zoller Seitz noticed the relationship between "Mad Men" and another fine work of complex TV storytelling, "Lost." While the tropical locale and that dreamy, purgatory feel I mentioned about 1,600 words ago also had me thinking of Jack, Sawyer and the gang, I left "Mad Men"'s clutches more fixated on a more obvious reference point: "The Sopranos."

I urge anyone who's interested in this kind of intertextual play to fire up HBOGo and watch the second and third episodes of season six of "The Sopranos." Tony, a forebearer of Don in vicious charm, has just been gut-shot. In his comatose state, he experiences a case of mistaken identity that has him playing the role of Arizona-based heating salesman Kevin Finnerty. The surreal mini-drama plays out on a sales trip to Orange County -- and let's face it, a business hotel is as good a place as any for the soul to leave the body. I think it might have happened to me at a 4A's conference.

Though Waikiki is -- thankfully -- no Costa Mesa, it's pretty easy to see the thematic link with "Mad Men," which, like "The Sopranos" and, to some extent, Dante, is a brilliant, prolonged working out of a midlife crisis. "I'm 46 years old," Tony says. "Who am I? Where am I going?" He's a touch older than Don but experiencing a similar alienation. And we hardly need to mention the Matthew Weiner link: The "Mad Men" showrunner was a writer and producer on "The Sopranos." And he got the writing credit on "Mayham," the second of the two Kevin Finnerty episodes.

Matt Creamer
View all articles by this author