'Mad Men' Recap: Chewed Up and Spit Out

Race Returns, and Maybe a New Villain Can Improve Don in Our Eyes
READ THIS NEXT
The 'Mad Men' Prop Auction: 5 Items You Need At Your Agency 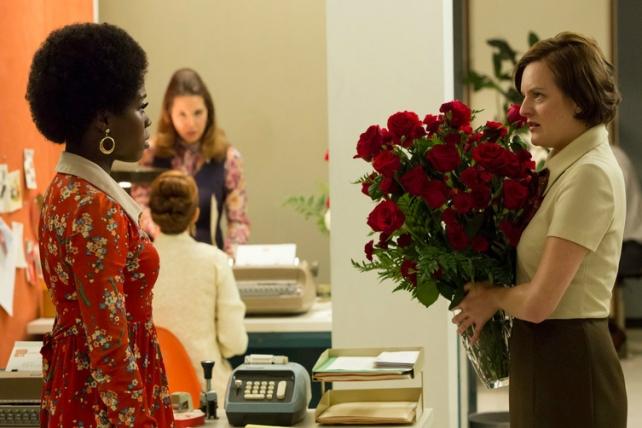 How do you create a villain that makes Don Draper look good?

It requires a character so distasteful that he makes you overlook all Don's lying, philandering and manipulating, whose lack of charm reminds you of Don's strengths in that department. You need Lou Avery. Or he'll do, at least.

Thus far, Lou's been something of an enigma, and not in the way that Bob Benson was an enigma. I can't say I've really cared much about the crotchety old creative director. Til now, he's felt a bit like a stand-in until whatever plot machinations wind up returning Don to the agency. He still feels a bit like that, but two episodes into the latest season, his cretinous behavior is making a mark on the agency. We already cringed at his coldness to Peggy in the season premiere. Now, in episode two, he comes out as a ham-fisted racist, sparking a return of the topic of race to the show.

Dawn, Draper's African-American secretary, is working for Lou -- but she's also secretly keeping Don up on what's going at the agency. When Sally Draper shows up at the agency looking for her dad, Dawn isn't around to deal with Don's mess, which pisses off Lou. He demands a "new girl," churlishly and indirectly referencing Title VII of the Civil Rights Act passed five years earlier. "I know you can't fire her, just move her to another part of the building." It's a terrible moment followed by an "apology" that only digs the hole deeper: "It's not my problem. None of it has anything to do with me. I'm sorry if I said the wrong thing."

Whenever it comes time for Lou to hit the bricks, we won't be mourning the loss, especially since his attitude seems infectious, particularly toward Peggy; it seems to be making her more of a, well, jerk. In addition to not having any idea how to manage a department, she tries to lose her African-American secretary for a reason that's possibly even more petty than Lou's. Peggy mistakes Shirley's Valentine's Day roses for her own, feels humiliated and wants her removed. Problem is, there's nowhere for Shirley and Dawn to go when Bert Cooper forbids Joan from having a black receptionist at the front desk.

This sad game of musical chairs, plus the back-and-forth between Dawn and Shirley -- who refer to one another by the other's name in what's probably a reference to the white employees at the agency thinking they look alike and getting them confused -- make me wish for more moments where race comes forward. I had a similar feeling with respect to the Don-Sally relationship as it's explored in the episode. Both dynamics are so much more interesting than, most anything to do with, say, Megan and her acting career.

Over in Draper's new office -- aka his roach-infested living room -- the writers are doing everything they can to make Don sympathetic. The episode opens with him sleeping late on a workday, munching on Ritz crackers while watching TV and flipping through magazines, and marking his consumption of a bottle of Canadian Club with a grease pencil. The capper is the fact that he tidies up the place and himself, changing into a suit and tie for a brief meeting with Dawn.

The chain of events that put Don in his current situation was kicked off, of course, by a wandering Sally last season. And once again we have Sally wandering. She's in the city for the funeral of her roommate's mother but she goes on an illicit shopping trip during which she loses her purse. She heads to Don's office, where he isn't, and then to his apartment.

Compared to when she walked in on him last season, Sally finds her dad in a very different situation: trying to do the right thing and make amends. Part of this is him telling the truth -- or a selective version of it. In true Don fashion, he hasn't told his family about the forced leave that has him watching "The Little Rascals" at noon and taking meetings with other agencies. And, of course, he's never really addressed the root of Sally's real problems with him.

The ride back to Sally's boarding school offers the two the chance to ... bond. That's probably not quite the right word, since the events of last season still hang so heavy. Heartbreakingly, Sally mentions her fear of running into Don's lover in the hallway and smelling her hairspray. They end up bonding over their shared inability to fully tell the truth. The episode ends with Sally leaving the car at a moment of what feels a little like redemption. "Happy Valentine's Day. I love you," she tells him.

As a moment, it's touching, but it's hard to imagine this marks a real turnaround in father-daughter relations.

If there are signs of detente between Don and Sally, other relationships are hardening. Jim Cutler is shaping up as an alpha dog, dictating how the new Chevy Southern California dealers business will be run, much to the chagrin of Pete Campbell. Though Pete won the business, he'll have to genuflect to Detroit and the as-yet-to-be-seen-this-season Bob Benson.

Frustrated, Pete takes us back the purgatory theme we visited last week. "Sometimes I think maybe I died and I'm in some kind of ... I don't know what it is ... heaven or hell or limbo. I don't seem to exist. No one seems to feel my existence."

Cutler also moves Joan from head of personnel into accounts, without getting Roger's approval. "I hate to think of you as an adversary. I'd really hate that," Cutler says in an elevator conversation with Sterling, who's wearing a black hat that looks so out of place it has to be a symbol or a red herring.

Don takes lunch with a Wells Rich Greene executive at an interesting time. Asked about the agency culture, Dave Wooster says, "You'd have to have Mary and you probably could." This is probably a reference to Mary Wells Lawrence's contract at the time, which could have been terminated with a mere 30 days notice. That would change soon. In April 1969, Ms. Lawrence received a 10-year contract worth $225,000 a year (over $1.4 million in 2014 dollars) plus deferred compensation.

Don also runs into Jim Hobart, who many moons ago tried to recruit Don to join McCann. Hobart's line, "All the millionaires at McCann would love to tell you how handsome you are" is sort of funny because, while there were undoubtedly plenty of rich men at McCann Erickson, the late 1960s weren't easy ones for parent Interpublic Group. In early February, the company announced it had completed a two-year turnaround after nearly going out of business.