In Lieu of Dr. Edna, Sally Talks With Neighbor Boy, Glen
READ THIS NEXT
The 'Mad Men' Prop Auction: 5 Items You Need At Your Agency

Where is Dr. Edna when you need her?

'Tis a pity that the sure-handed child psychologist hasn't been around lately for former patient Sally Draper, who in last night's episode witnessed a potentially psyche-destroying scene: her step-grandmother's head bobbing in Roger Sterling's lap. In lieu of ongoing professional help, Sally has surrogate counseling sessions in the form of late-night phone calls with Glen, the neighbor boy from Ossining who, despite having a few years on Sally and the distance of boarding school, is revealed as a steady if strange sounding board as the eldest Draper child moves toward adolescence.

"How is the city?" Glen asks Sally in the episode's closing moment.

The exchange is the funny, gloomy punctuation mark on a disillusioning evening that should have been a grand time -- a fancy American Cancer Society dinner where her father is to be honored. Instead of getting a peek into the glamour and sophistication that privilege affords, she's smacked in the face with reality. First, there's Don's (sensible) demand that she leave her new go-go boots at home and take off her makeup before going out in public. Then there's the realization that the hotel ballroom where the dinner is hosted lacks the sweeping staircases she's used to from her childhood stories. Far from magical, this ballroom is dim and crowded and smoky and full of old people. Then there's the food. Staring at her from the plate is a gruesome whole cod that the fish-averse Sally has to pick around.

It's a moment that 's both horrifying and hilarious, a classic scene in a classic episode that 's up there among the show's best. To my mind, one of the single finest "Mad Men" episodes came midway through the second season, the one that begins with Don ogling a Coup de Ville that 's a symbol of his rise in the business world and ends with Betty, drunken and disgusted with Don's philandering, taking care of that new car smell by puking all over the new upholstery. What the show gives, it takes away immediately -- a quick erection and vicious demolition of the American dream. Last night's episode is similar in theme and a rival in effectiveness.

Kicking it all off is our first glimpse of the Calvets, down from Montreal to visit the Drapers. It's quickly clear that Megan's parents have brought along their very European-feeling misery. The father -- who reminded me of Max Von Sydow in "Hannah and Her Sisters" -- is a Marxist academic and frustrated author who's bedding and weeping to one of his grad students. He disapproves of Don's trade and his daughter's apparent decision to sit out the class struggle. The mother is flirtatious with Don from the get-go, symptomatic of a perverse competition with her daughter and an ennui that reaches its fullest flowering when she goes down on Sterling. Before that climax, there's a lot of awkward digs, some nattering in French and one blowout fight.

Standing outside the closed door separating her from her quarreling parents, Megan says, "They'll recover; they always do." Yes, she is talking about her parents, but this is an observation on the Drapers' marriage, which has developed its own cycle of happiness followed by despair. Just last week, Don was ditching Megan at an upstate Howard Johnson's and angrily chasing her around their apartment. This week, in contrast, he's jumping her bones in a cab after she develops a winning idea for Heinz and helps sell it through just as the client is about to walk.

The insight behind the Heinz idea comes when Megan sees herself becoming her mother. Megan makes spaghetti for Sally; Mr. . Calvet did the same for Megan when she was a child. That morphing might not be great news for Megan, given how unhappy her mother seems. But if Megan sees that interpretation, she puts it aside so the insight can flower into a necessarily upbeat ad idea: From prehistoric times to the space age, mother and children have enjoyed beans. Generations pass things down. The Heinz client eats it up. "It's the future," he coos. "It's all I ever wanted." 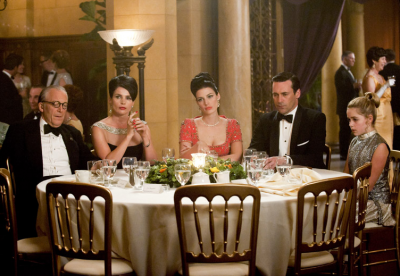 Everybody having a good time?

But one generation of course also inflicts itself on the next, passing down petty torments, flaws and anxieties. That's the show's conclusion, one whose fullest visual expression comes in a gorgeous shot of the Calvets and the Drapers sitting ruefully at the ballroom table. As the other dramas have played out, Don has been informed that the reason he is being honored -- his broadside against the tobacco industry -- has ensured that none of the masters of the universe in the room will ever hire him. And Megan, despite her Heinz victory, is having trouble celebrating. This is not forward motion but stasis. The camera slowly pulls back, framing for us three generations of disillusionment. Reality ends up being the precise inverse of the ad. Funny, that .

Meanwhile, Peggy and Abe decide to shack up -- something her very Catholic mother is having none of . It's been awhile since we've seen Mr. . Olson, a widow from deep Brooklyn. Presumably she's been busy taking care of Peggy's never-mentioned child with Pete Campbell. Anyway, she's not happy, and voices a reasonable criticism -- primarily the will-he-buy-the-milk-when-he-gets-the-cow-for-free argument.

I don't really have that much to say about this development, so we'll end with some historical notes:

-- The Edward Albee play that the Heinz client went to see would have been "A Delicate Balance," his Pulitzer Prize-winning drama about -- wait for it -- suburban dysfunction.

-- Mary Lasker, an oft-overlooked power broker, was name-dropped. At that time, she would have been the widow of ad exec Albert Lasker. Together the Laskers helped turn the American Cancer Society into an advertising force, though Albert worked for Lucky Strike (a former Sterling Cooper Draper Pryce client) before the Surgeon General's warning.

-- While counseling Peggy, Joan used "It is what it is " in reference to her own husband's decision to return to Vietnam. The expression is very now-feeling and, in the context of "Mad Men," seemed anachronistic. Turns out that William Safire wrote a 2006 column on the tautological and, these days, overused expression. The late New York Times columnist found that it first appeared in print in 1949 and popped up rather sparingly afterward until the late 20th century. Safire quotes a Merriam-Webster editor on the definition: "It is what it is is also a way of expressing philosophical resignation over a disappointment, of saying that the situation just has to be put up with."

Given the episode around it, that feels so right that I'm ready to forgive any historical missteps.

~~~
UPDATE: To be clear, that was an attempt at a joke about Mr. . Olson being busy taking care of Peggy and Pete's child. As AMC has reminded us with a note from that very child, Peggy gave the baby up for adoption.