Is the Show Finally Taking on Race?
READ THIS NEXT
The 'Mad Men' Prop Auction: 5 Items You Need At Your Agency

About midway through last night's "Mad Men," Pete Campbell issues a warning to his fellow partners at the agency: "I might remind you and everyone that the Commission on Human Rights is continuing to investigate our industry regarding the employment of Negroes."

The partners' regular meeting has been interrupted by a suddenly ballsy Harry Crane. The media-department head is incensed that his secretary has been summarily canned by Joan after she ditched work early and had another of the "girls" punch out her time card. The other girl is Dawn, Don's secretary and the lone recurring black character over the past couple of seasons. Pete's reminder frames one question -- can we really afford to fire one of our few black employees when the city is demanding that we hire more? -- that leads to a bigger one: Is "Mad Men" finally ready to talk about race?

In the real 1968, New York City's Human Rights Commission would make the whiteness of Madison Avenue a story. Hearings in March would be followed by more information gathering throughout the summer, culminating in a report issued in November.

That report, which you can still read online, is a damning account of the industry's attitude toward race at a time when the country was consumed by it. This was, after all, years since the Civil Rights movement began and the year in which Martin Luther King Jr. would be assassinated, setting off widespread riots.

Reading the report now, we see that the industry's actual attitude toward race was pretty much in line with how it is depicted in the character of Pete: "an unacceptable pattern of exclusion -- tokenism." Between September 1967 and September 1968, the city's largest advertising agencies, under pressure from the commission, improved the representation of "Negroes and Puerto Ricans" to about 7% from about 5%. But this came on a declining base and predominantly through the hiring of low-level employees. The biggest strides came in the category of "all others" which, according to the report, represents the "lower depths" of the industry. There was no movement in general management and little in other categories with upward mobility, like research, creative and account management.

The report claims that even as the industry was aware of the problem, it was unwilling to do anything to fix it. The commission encountered institutional defeatism, which it countered with a little snark: "If you were able to sell Volkswagens at the time you did and in this New York market, you can discover ways to hire, train and integrate into your staffs persons so long excluded from the industry."

This is an amazing line that takes aim at the central case study of the 1960s creative revolution: DDB's post-war turnaround of Volkswagen by eviscerating its German past. In other words, if you can do it for it our fairly recent enemies, you can do it for our own people. The commission also gives the industry a generous dollop of credit for being the kind of idea generators and problem solvers who find a way to deal with big challenges.

Could this be the moment "Mad Men" finally engages with the question of race? Dawn's introduction last season, coming after that memorable racist water-balloon incident, felt like a head fake. We got that one strange night on Peggy's couch and then nothing. But now with the King assassination looming, we're getting some sense of a more developed black character. We even see Dawn outside of work twice, eating at a black coffee shop with a friend.

These scenes are bracing because we're unaccustomed to any action that doesn't involve at least one of the show's (white) principal characters. It's almost like being thrust into different show despite the fact that not all that much goes in the scenes. Dawn describes the loneliness and alienation she feels in the white-dominated world, telling of seeing another black friend downtown, near work, but not really seeing him.

It might not conjure the pain of Ralph Ellison's "Invisible Man," but Dawn's words suggest the alienation that comes with being part of the paltry 5%. 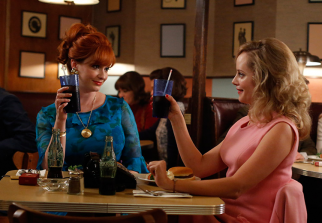 *******
If "Mad Men" has waded slowly into race in the late 1960s, it's done a can opener into the sexual milieu. We've always had plenty of adultery and divorce to go around, but, post-Summer of Love, the show needs to take things to a new libidinous level.

On the eve of Megan's first love scene in her soap opera, she and Don are taken to dinner by the Megan's boss and his wife. After some small talk in which it's revealed that Don's against the war (surprising!), he and Megan are propositioned: "We'll go back to our pad, smoke some grass, and see what happens?"

That this silky come-on issues from the lips of sitcom mainstay Ted McGinley, who had roles on "Married With Children" and "Happy Days" among other shows, is a whole other set of baggage. TV Guide has called him the "patron saint of shark-jumping," making his inclusion in the sixth season of a show a brash choice.

Nevertheless, somehow the Drapers are able to say no to their would-be orgymates and even have a laugh about it. But the joking ends when Don turns up the next day at Megan's set, getting predictably pissed at the sight of his wife getting groped by some fellow named Rod. Don is in full unlikeable mode this season and the reaction is both overly touchy and wildly hypocritical, given that he's been sneaking down to the neighbor lady's bedroom for weeks now.

Speaking of whom, we only get a few minutes of Sylvia this week and it's at the end of the episode. She tells Don "I pray for you to find peace," a line that would play better if we had any reason to believe that it's peace and not a piece that Don is looking for.

Then there's Joan, who's out for a night on the town with Kate, a friend in from Spokane. In just one change of scenery, they make an epochal leap, journeying from mid-decade style flirting at a cutesy soda fountain where every table has its own phone to making out on the couches and, even dirtier, listening to Serge Gainsbourg at Electric Circus, an actual club.

We don't really know how far Kate, a married sales director at Mary Kay, goes with her infidelity, but it is interesting to look at her fooling around in contrast with the male version. Early in the show, there's a moment where the slick young Heinz ketchup client rather grossly sucks on his finger so he can slip off his wedding ring in preparation for a date.

It's a little thing, but male adultery, as represented by ketchup or Don or, in last week's episode, Pete, is disgusting, damaging if not completely destructive. Business cheating also goes awry, with the plan to snag Heinz Ketchup behind the back of loyal Baked Beans falling apart. Both Sterling Cooper Draper Pryce and a Peggy Olson-led team from Cutler, Gleason and Chaough lose out to JWT, a miscalculation that will likely cost SCDP the beans.

But adultery from the female perspective? Kate is a little antsy the next morning, but Joan consoles her. "You had some fun. Now you'll go home and find everything right where it belongs."

Maybe this is a false sense of liberation to match Joan's false sense of power at Sterling Cooper Draper Pryce. After all, Joan has already seen her authority undermined by Harry Crane, who is, let's cut to the chase, a boob. Not only does Harry save his secretary's job but he goes over Joan's head and digs at her with a boardroom reference to that Thing She Did With the Jaguar Client That Shan't Be Mentioned. Oh, and he also manages to double his income and gain leverage in his own campaign for partnership with one asinine-sounding TV idea for Dow: "Broadway Joe on Broadway."

It's a truism that the late 1960s exploded with social and cultural change that would open many doors for many people over the ensuing decades. You have to wonder whether these intensely flawed characters will be up for it. Oddly enough, the Human Rights Commission thought they were, writing of their real-life counterparts and the race issue, "Of all men in all industry, we believe the communications professionals to be best equipped to solve the problem."

Given that 40 years later the commission was still investigating the ad industry for coming up short on diversity, we have to categorize this as wishful thinking.