Matt Creamer's Recap
READ THIS NEXT
The 'Mad Men' Prop Auction: 5 Items You Need At Your Agency

NEW YORK (AdAge.com) -- Last week "Mad Men" left us wallowing in rejection. The theme this week is shame and, let there be no doubt, the characters' glib successes throughout the early seasons have been nuked and replaced with grim struggle. Everything on "Mad Men" -- running an agency, getting old, being young, growing up, being married, getting divorced, being single -- is difficult. Victories are hard-won and provisional, even meaningless. 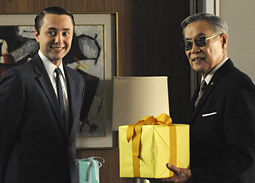 Pete Campbell (left) is becoming more likable as he becomes more direct and less conniving.
Credit:
AMC
Don Draper, genius though he may be, is not finding the start-up life to be a gravy train. And even the unflappable Roger Sterling has been flapped. He's angry at having to deal with a visit from Japanese Honda executives, who have put their big-budget motorcycle account into review. Sterling, alone among the firm's partners, can't abide the notion of working for a company run by the people he was at war with two decades ago.

His anger manifests in a torrent of insults that even the other not particularly politically correct white men who preside over the desperate-for-new-business agency find appalling. Pete Campbell, who is becoming more likable as he becomes more direct and less conniving, loudly balks at Sterling's inability to put the past behind him, accusing him of not wanting to lose his grip by bringing in other accounts and being overly sensitive: "If Bernbach can do business with Volkswagen, we can do business with anyone."

With the deal apparently squelched, Draper used the Honda opportunity as part of a rather contrived plan to put a hurting on a rival nipping at his heels. But all is not lost where the Honda ad budget is concerned, thanks to Bert Cooper's fetishizing of Japanese culture, which finally comes in handy. While the agency is never formally booted from the pitch, the older man knows that Japanese business practice calls for the firm's leaders to show up at a meeting to resign from battle -- unconditional surrender, of a sort. Draper does just that, signing back over a $3,000 stipend that was meant to fund the creation of copy and storyboards for the proposed campaign.

In the end, the firm comes out not with the motorcycle account, which remains at Grey, but with first dibs on ads for the forthcoming Honda car. It's Draper's derring-do and Cooper's long-cultivated knowledge that wins the day, along with the teachings of "The Chrysanthemum and the Sword" placed around the office. That book, written by Ruth Benedict and published in 1946, though now widely (no surprise) discredited, did much to crystallize foreign perceptions of Japan as a "shame society." 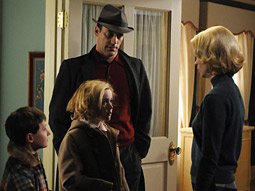 Ten-year-old Sally Draper makes a visit to the psychiatrist's couch after being caught 'playing with herself.'
Which brings us to 10-year-old Sally Draper, who, in the other main narrative thread of the episode, is caught, as her mother put it, "playing with herself" while watching "The Man From U.N.C.L.E." Betty is awakened to Sally's awakening by a friend's mother at a slumber party. Next stop, psychiatrist's couch, where "Mad Men" spent much of its early days, only with Betty in it.

In her intake meeting with Sally's doctor, we see precisely how far Betty hasn't come over four years. What was once an undefined boredom and a nonspecific unhappiness is now a sadness and confusion that flows from the recent death of her father and her divorce. It's potent enough that the psychiatrist suggests Betty herself "see someone." Dr. Edna, as she asked to be called, is no dream, but she and her technicolor office are less scary than the menacing shrink of those early episodes who unflinchingly reported the full content of Betty's sessions back to Don in late-night phone calls. Betty, it is concluded, will have a monthly meeting to check in on Sally's status. The big question now is whether Don will drag his brooding self to the couch.

In 1965, as the show makes clear, Honda and its Honda 50 bike owned the American market for motorbikes, with 50% market share. Credit went to the three or four prior years in which Honda's U.S. unit engaged in some of the most expensive marketing it had ever done. Ad budgets grew from $240,000 in 1961 to over $2 million two years later when Grey's Beverly Hills office won the motorcycle business away from Gumpertz, Bentley & Dolan with "You Meet the Nicest People on a Honda" campaign, which was originally cooked up by a UCLA student. The Honda 50 bike and the campaign supporting it gained enough traction that in 1964 The Beach Boys were singing about the "Little Honda." ("It's not a big motorcycle/ just a groovy little motorbike.")

That year, Honda became the first foreign company to advertise on the Academy Awards. Two 90-second ads on the show cost it $300,000. (That would be a $2 million buy in 2010 dollars.) It was a huge bet that paid off. In 1960, sales were just $500,000; by 1965, that number had soared to $77 million. And image had everything to do with that success. Honda had succeeded in changing the image of a motorcycle rider from the leather-jacketed hoodlums to nice, average folk looking for a fast, affordable, modern and fun way to get around.

Nevertheless, at around the time Honda executives visited the offices of Sterling Cooper Draper Price, Honda was about to dip into a sales slump. Here's how a rather excellent history on Honda's website described it:

By 1965, the U.S. was heavily engaged in the Vietnam War. Many young American men, representing the core market for the Honda 50, went off to battle in the jungles of Southeast Asia. Society showed signs of confusion as the financial markets began to wobble, and soon it was difficult to finance even a smaller purchase like a motorcycle. By the spring of 1966, sales of the 50 and other American Honda products were in a nosedive. The slump would continue for some time.

Another challenge: Honda's efforts to diversify didn't meet with much success, as a couple of lightweight cars, likely the leftovers that Draper would have gotten his hands on, were failures when introduced in the late 1960s. It wouldn't be until 1973's introduction of the Civic -- and then the Accord three years later -- that Honda would begin to figure out the American car market.

Because of a relationship with Ford Motor Co., Grey didn't get to handle Honda's car business but it did keep its hands on the motorcycles for some time. In 1979, the motorcycle account was shifted to Dailey & Partners.

Advertising Age has a one-legged reporter, The Wall Street Journal a sycophantic one, and, now after the most recent episode, The New York Times has an overly suggestible ad columnist who doesn't seem to have his own phone. After seeing Matthew Weiner's depressing depictions of 1960s journalists, it's making our troubled times look like a Golden Age. At least we have limbs -- and phones.