Or, When Is Someone Going to Die?
READ THIS NEXT
The 'Mad Men' Prop Auction: 5 Items You Need At Your Agency

When is someone going to die? 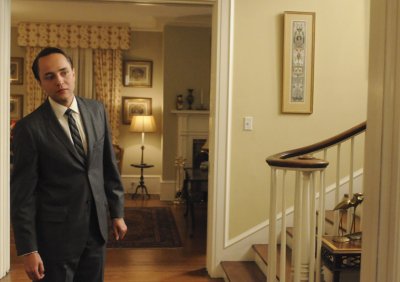 For a fifth-season show that 's yet to see a major character bite the dust, "Mad Men" is steeped in death. Health scares and random historical catastrophes of earlier seasons have given way to a backdrop of random, gruesome, media-hyped mass violence. Yet our heroes' artery-hardened hearts go on, amid escalating crime rates. So it should be no surprise by now that titling an episode "Lady Lazarus," after a Sylvia Plath poem, is just more thanatological foreplay.

There are few more expedient ways to layer on morbidity than by referencing the icon of artistic suicide, especially when your dark little playground is the 1960's. The Plath poem of the episode title is full of Nazi symbolism and tells of a woman whose failed attempts at suicide are themselves rebirths. The usual scholarly interpretation sees this as Plath discussing her own suicide attempts just before the one that worked, as well as a feminist fight song, with a chilling final stanza, "Out of the ash/I rise with my red hair/and eat men like air."

Patriarchal resistance is a theme shared by "Mad Men," and expressed in Peggy and Megan, each of whom thwart the male-dominated business world in different ways. At this point the suicide talk, glancing as it is , isn't from either of them, but rather Pete Campbell, whose season-long slide continued in last night's episode as what should have been a one-night stand turned into a mini obsession.

The setup involves his buddy from the commuter train, a schlumpy life-insurance salesman named Howard. An attempt to sell Pete insurance leads the account man to mention how he has a company policy that covers suicide after two years. We don't know yet whether this is meaningful, macabre foreshadowing or Pete acting like a clown, but, given his recent trajectory, it doesn't look good.

Not so incidentally, Howard brags to Pete about his Manhattan pied-a-terre, equipped with a 24-year-old strawberry blonde. That's where Howard is later when Pete encounters his wife, Beth, who is locked out of her car in the train-station parking lot. Pete agrees to drop her off at home and, in the course of the car ride, it becomes clear that Beth knows about Howard's philandering and is generally unhappy. Next thing you know, Pete is inside, announcing he's not leaving 'til he's sure she's not "hysterical," a very loaded term in the context of feminism and marriage. It's a touch soap-operatic, saved mainly by a brilliant swatch of post-coital dialogue:

Beth: Your irises are so blue and round. Have you seen those pictures of the earth from space?

Pete: I have. I'll take that as a compliment.

Beth: It didn't bother you to see the earth tiny and unprotected, surrounded by darkness.

Here and elsewhere, Pete is unable to read the situation for what it is : an asymmetrical case of the "zipless fuck," an eminently useful concept coined in Erica Jong's 1973 feminist novel "Fear of Flying." Here's how Ms. Jong describes it: "No one is trying to prove anything or get anything out of anyone. The zipless fuck is the purest thing there is . And it is rarer than the unicorn."

And, after this episode, it is no less rare. Pete wants more out of this than Beth -- a sullen character played by grown-up Gilmore Girl Alexis Bledel -- offers. For Beth, this romp was fantasy fodder, maybe a way of getting back at Howard. For Pete, it's something deeper, perhaps a way of out of the unspecified misery he's found himself in. And he won't let it rest. Faking an interest in the insurance policy, Pete shows up at their home for dinner; she fakes a migraine. He asks her to meet him at the Pennsylvania hotel for a rendezvous; she doesn't show. In the end, all she offers is a heart finger-drawn on a fogged up car window. She then promptly rolls the window down to erase it.

Struggling though he is , it's difficult to imagine Pete as some sort of Madison Ave. version of Plath. He is thriving at his work, even though it's not being compensated in money or promotions or fancy office space. At home, who knows? We don't get much of the apparently loving, confident Trudy -- maybe because she's too likable. Pete's frustrations seem to be free-floating. Perhaps they have psychogeographical roots, an ennui that has popped up since he and the family moved to the suburbs.

There is , of course, the loss of control. Talking of women, he whines to Harry, "Why do they get to decide what happens?"

This quest for self-determination isn't limited to Beth, of course. We've seen Peggy rise from receptionist to copywriter; and Megan, too, is charting her own course, ditching advertising for acting, her first professional love. In a reversal of what we've come to expect from Don, the episode opens with Megan sneaking around on her husband to go to an audition for an off-Broadway play. The tryout goes just well enough to remind her that she'd rather be onstage. Suddenly, the up-and-comer who just last week successfully saved the agency's Heinz account is packing her box and saying goodbye.

In her professional rebirth, death rears its head again. After Megan takes one elevator down, Don summons his own. But as he steps to the open door, he peers in and sees that there's no car, just an empty shaft that he's almost plunged into. The moment recalls the falling man of the opening credits and, along with the episode title and the suicide reference, raises big questions.

Is there an actual death in the offing? Or is this just symbolic, the imminent demise of a particular idea of man: the depression-born, war-surviving, dark-suit-wearing creature unable to stand or understand The Beatles, getting chewed up by the women around him as he gazes down at the cables and the cavernous shaft into the empty guts of modernity? 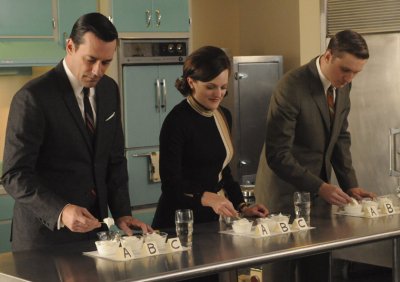 Men, it turns out, aren't the only thing being eaten like air. Whipped cream is too, or rather its lab-created surrogate that , Wired magazine found four decades later, is mostly water and air. We're talking about Cool Whip, of course. In 1966, the dairy-free whipped-cream substitute was on the eve of its release by Birds Eye, the General Food division. Peggy, Don, and Cosgrove visit the test kitchen for a wonderful scene in which Peggy, standing in for Megan, botches a little routine the Drapers had worked up.

To the excitement of Twitter, one of the potential clients is played by Dennis Haskins, the actor who portrayed the hapless Mr. Belding on "Saved By the Bell." As far as I can tell, it's unclear what, if any, real-life character he is playing, but I'd like to believe it's William Mitchell. As the creator of not only Cool Whip, but also Tang and Pop Rocks, Mitchell was basically the Leo da Vinci of food engineering.

This episode gave us a wonderful industry joke. Client Chevalier Blanc wants The Beatles for ad music, but the agency assures them it can't be had. This is a reference to The Beatles' historical reluctance to license their songs for use in TV, movies and commercials. There have been exceptions, notably (and controversially) Nike 's appropriation of "Revolution" in an ad campaign back in the 1990s and, less majestically, the use of "Fool on the Hill" in "Dinner for Schmucks." The reported cost there was a steep $1.5 million. Now added to the exceptions is "Mad Men." Last night's episode employed "Tomorrow Never Knows," the somehow both urgent-and-droning masterpiece off 1966's Revolver, in the final moments and closing credits.

More background: 1966 is typically understood as a turning point in pop music with the release of "Revolver" and The Beach Boys' "Pet Sounds," which figured in Roger Sterling's acid trip a few weeks back. Mentioned in that episode was the Tibetan Book of the Dead, which also inspired the lyrical content of "Tomorrow Never Knows." It's tough to find a better transitional moment as rock morphed from pop singles into the psychedelic freakouts of the late decade, a change mirrored by the show's disintegrating social structures.

Anachronism watch: Half-assed. Peggy's use of the phrase to disparage Don's preparation for Cool Whip sounded an alert for me, especially after the widespread discontent surrounding the use of "It is what it is " last episode. Turns out that half-assed is probably a very old expression going back to the 19th century, a corruption of "half-adz," if you can believe it. The adz is a wood-shaping tool and half-adz became an expression for shaping wood that is visible while leaving the unseen parts unfinished -- in a rather half-assed fashion. Or at least that 's what my half-Google Chromed research tells me. (Alternate possibility: originally a mispronunciation of "haphazard.")