Plus: We've Chevy's First Commercial for the Camaro
READ THIS NEXT
The 'Mad Men' Prop Auction: 5 Items You Need At Your Agency
Peggy Olson (Elisabeth Moss)
Credit: Michael Yarish/AMC

A pitch for a secret product. An account resigned in spite. A thwarted IPO. A surprise merger. 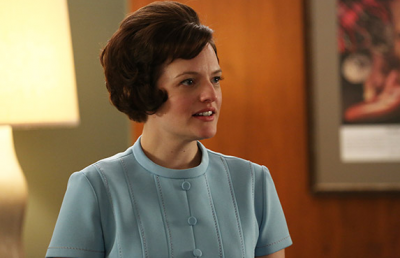 For all those put off by the feeling that "Mad Men" has in its sixth season veered into the soap operatic, last night's episode should be a return to form. Chock full of agency-business swashbuckling and devoid of any scenes of Don Draper slipping into bed with the doctor's wife, the episode sets up the remaining half of the season with some big questions. We'll get to those later. First, last night's action.

The opening shot gives us a banker who, in addition to bearing a passing resemblance to Martin Sorrell, has been vetting Sterling Cooper Draper Pryce's books for a potential stock offering that would make Joan, who presumably holds the least amount of equity, a near-millionaire. She, Pete and Bert are in the room. Is it weird that Draper and Sterling aren't? Of course it is, but, hey, this is TV.

Just about any sort of agency IPO sounds impossible today, let alone one the size of SCDP. When you think about advertising stock -- and we know you do! -- you probably think about the big, diversified holding companies, like Omnicom or Mr. Sorrell's WPP, not little Madison Ave. shops. Things were different back in 1968. As the banker tells the group, "There is precedent for small agencies." Indeed, there was.

As of May 1968, when the episode takes place, seven ad agencies had gone public. Wells Rich Greene, led by media darling and perhaps real-life Peggy inspiration Mary Wells, was gearing up to become the eighth at the ripe old age of two. Six years before, Papert, Koenig, Lois had been the first to file and was followed by the more familiar likes of DDB, Ogilvy & Mather and Foote, Cone & Belding.

So taking a smallish ad agency public wasn't unheard of, and it was a good way to get rich quick and/or fund expansion. As Pete says as he leers at a tipsy Joan, "This capitalization will double our size." (Interestingly, the banker proposes a sale of 400,000 shares, the same figure proposed in Well Rich Greene's registration statement. The real agency, though, earned a better share price than the fictional shop stood to get, though.)

As the IPO talks unfold unbeknownst to Draper and Sterling, we get a look at their very different machinations. Sterling, doing more "work" than he's done is years, is bedding Daisy, the manager of the Northwest Airlines first-class lounge. Daisy has become a mole, giving Sterling a set of ears on marketing executives coming from and going to places like Cincinnati and Detroit. (Read: Procter & Gamble and automotive companies.)

Her eavesdropping gets Sterling in a seat next to a pickled, horny General Motors executive, a move that gets SCDP into a top-secret pitch for a top-secret new Chevrolet car. Good thing, since what was supposed to be an air-clearing session between Don and the Jaguar client has now gone horribly awry. After the loathsome Herb Rennet tries to force a junior copywriter from his car lots onto the SCDP account, Draper fumes and quits the business. Which, as you can imagine, is not good for the IPO talks. When Pete discovers this, he flips out in the middle of the agency, screaming at Draper and taking a tumble down the steps. Meanwhile, Pete, whose marriage is dissolving, has also screwed up by running into his father-in-law/Vicks Chemical client at a "party house" with, as only Pete would put it, "the biggest, blackest prostitute you've ever seen."

The Chevrolet pitch begins as a life preserver for the sinking IPO, but it ends up being a route to an entirely different kind of transaction. We know that the Peggy-poaching archenemies at Cutler, Gleason and Chaough are also chasing Chevy and the agency is also in a state of flux. As fast as we're introduced to Gleason, we learn he has a presumably fatal pancreatic cancer, meaning he'll have to be bought out by the other two partners. And CGC dumped Alfa Romeo to chase the Chevrolet account.

When Don and Ted Chaough eventually bump into each other in the hotel bar the night before the pitch, we're set up for a bout of "psychological warfare," to use Don's term. No one gets under Draper's skin like Chaough, after all. But their chat ends up being a commiseration over the plight of the small agency. They surmise that because there are two small shops in the pitch neither is really a viable alternative to handle such a big account and that the larger Campbell-Ewald or Dancer, Fitzgerald, Sample has Chevy locked up. (In real life, Campbell-Ewald, which in 1968 was four years shy of being bought by Interpublic Group, had already been working on General Motors for nearly 50 years, so would be considered an incumbent shop with a lot of experience going into this pitch). 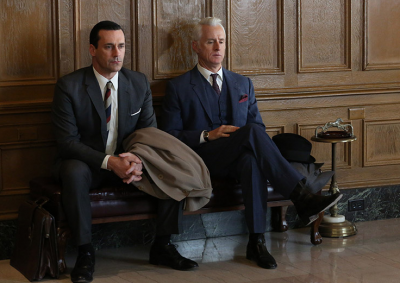 "You know how it works," Chaough tells Draper. "They're going to take our creative and give it to one of the big boys."

"This business is rigged," Draper concurs. "I should just let Chevy buy my brain and put it in a jar."

What they need is more scale -- and fast. What will give it to them is a merger. But you don't have to know much ad history to know that mergers don't always sit well on Madison Ave. and the move broaches some big questions:

-- What will the combined company be called? SCDPCGC or some sort of similar alphabet soup would sound awful, but it's not without real-life inspirations: Messner Vetere Berger McNamee Schmetterer/Euro RSCG, anyone? In any case, the inevitable rebranding offers a good chance to drop the deceased Lane Pryce's name off the door.

-- Is there room enough for more than one wise-cracking silver fox? The introduction of Harry Hamlin, of "L.A. Law" fame, as Jim Cutler means that Roger Sterling is going to get a run for his "Sterling's Gold" in the one-liner department. "Unless this works, I'm against it," Cutler quips. Sterling replies, "I was just saying the same thing."

-- Most importantly, will Draper and Chaough end up in some sort of battle for Peggy's affections? I hope not, or at least I hope that whatever tension there is, it's more about mentoring Peggy than it is sleeping with her. In many ways, Draper and Chaough are foils. Chaough gets balance in a way Draper doesn't. Draper is more loyal to employees and clients than his wives. Chaough can be a cutthroat businessman while working on his marriage. Of course, this interpretation is complicated by Ted's making out with Peggy, who doesn't exactly resist and then fantasizes about Ted when she's with Abe. "Don't say I'm nice," he tells Peggy. "I hate it when they say I'm nice." Will see a darker side of Chaough as he's pulled into Draper's nasty orbit?

-- Finally, what is that Chevy car that the merged agency won? All the talk about creating a competitor to the Ford Mustang makes it sound like the Camaro, but that was launched in 1967. It wouldn't be the first time the show's played loose with history and probably won't be the last.

To get your Monday off right, here's how Chevy launched the Camaro back in 1967:

UPDATE: Scratch that stuff about the Camaro. Thanks to commenter Jeff Allen, we now know that the Chevy model in question is the Vega, which was developed between 1968 and 1970 and produced until 1977. Here's the 1971 Vega ad dug up by commenter Rick Oherron: