What You Missed on 'Mad Men' Last Night: The Women (and Girls) of Sterling Cooper Draper Pryce | Ad Age
Skip to main content
Sign In Register

What You Missed on 'Mad Men' Last Night: The Women (and Girls) of Sterling Cooper Draper Pryce

Matthew Creamer's Recap
READ THIS NEXT
The 'Mad Men' Prop Auction: 5 Items You Need At Your Agency

"It's a business full of sadists and masochists and you know which one you are."

Those are Mr. . Blankenship's words to Peggy Olson, delivered not long before the old, nearly blind secretary dies while sitting up at her desk. It's a sad end for Roger Sterling's one-time "Queen of Perversions," but she enjoyed a nice run as comic relief in this, a relentlessly bleak season during which most of the main characters have happened upon new forms of pain. And if the characters aren't into being smacked around or doing the smacking, the writers are, and we viewers certainly are. 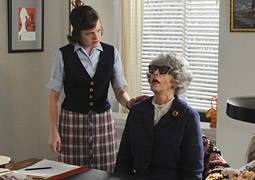 Peggy Olson and Miss Blankenship on last night's episode of 'Mad Men.'
Credit:
AMC
Joan is the latest to be plunged into existential crisis, with confirmation that her husband will be shipping off to Vietnam after basic training. This plotline has been telegraphed for some time and it's hard not to read it as a death sentence. Joan reacts by become snippy in the office and a bit of a layabout at home, depressed enough to succumb once again to Sterling's charms, which have the air of desperation as he stares down mortality and legacy. After buying her an in-home Swedish massage, there's dinner. Walking home, the pair are mugged at gunpoint -- a quick wave to a New York that was then sliding into a crime-ridden mess. The moment provided the kind of stress that leads the pair to hump in an alleyway. This all feels predestined, but it's a bit soap-operaish for my tastes, and I can't help but be annoyed by how Jane, the new Mr. . Sterling, has been too conveniently written out of the show.

Meanwhile, Peggy's political awakening continues. A fix-up leaves her in a bar to talk about race and gender with a screedy writer called Abe Drexler, whom she'd met before at a Warholian loft party. He's the kind of person that would pen an essay called "Nuremberg on Madison Avenue." Abe challenges her for working at an agency that would represent a force so malevolent as Fillmore Auto Parts, now facing a boycott in the South because it refuses to hire black people. Peggy rebuts that, as a woman, she can't do a lot of the things blacks can't do and ends the night early. However, Fillmore -- as far as I can tell, a fictional company -- sticks in her craw. She ends up having the classic moral negotiation that any ad person who works for a less-than-desirable client must. Her only mistake is having that negotiation with Draper, who tells her, "Our job is to make men like Fillmore Auto Parts, not Fillmore Auto Parts like negros."

The other realization in this episode is that little Sally Draper's situation can no longer be ignored. Last seen rubbing herself while watching TV at a slumber party, Sally this time made a solo train trip to New York to show up in her father's office. This, as you'd imagine, offers the occasion for some spectacularly bad parenting. Draper, whose recent journaling clearly hasn't made him any more emotionally available where his kids are concerned, follows a don't-do-that-because-I-said-so lashing and a trip to the zoo with what might be the ultimate punishment: He makes her talk to Faye, who, shock of all shocks, is now humping Don. Being counseled by a woman she's never met, of course, doesn't do much good. The climax has Sally sprinting out of Don's office and belly-flopping down the hall. She's soothed by one of the secretaries, but Sally knows it won't be OK and says so. And she's right. It won't be OK. Her parents are divorced, and her mother seems to be living in a perpetual ice bath, while her father is ... well, her father.

Sally, in my mind one of the best-acted roles on the show, is the most fascinating and frustrating of all the plot threads now in action. She's clearly a bright child living in a lot of pain, and there's no one in her own home or in the agency with the awareness to help her. Not one soul seems to be acknowledging that her family has been broken and that the pieces need some picking up.

Wrote Fred in an email: "She was turning her attention to our Mad Men and would be demanding that they raise the visibility of African-Americans -- in their offices and in ad campaigns. With such stalwart associates as Florence Rice and James Haughton, she banged on doors, held street rallies, set up picket lines and was invited into boardrooms. Agencies responded by publicizing their black leaders -- execs such as Georg Olden ( BBDO, McCann-Erickson) and Harvey Russell (BBDO). At the time of her death in 2000, their numbers -- though not yet representative -- had clearly grown."

Despite that improvement, diversity in ad agencies remains a problem. Just a few years ago, they were attacked by the New York City Human Rights Commission for not doing enough to hire minority candidates. While some strides have been made, there's a long way to go, if this post is any indication.