What You Missed on 'Mad Men' Last Night: A Lot | Ad Age
Skip to main content
Sign In Register

What You Missed on 'Mad Men' Last Night: A Lot

Matthew Creamer Recap: G-Men, Playboy Bunnies, Panic Attacks and the Beatles
READ THIS NEXT
The 'Mad Men' Prop Auction: 5 Items You Need At Your Agency

G-Men. Playboy Bunnies. Abortion. The Beatles. Any episode that includes these, and almost delivers heart attacks to Draper and Sterling, is doing a bang-up job in the plot department, something the fourth season of "Mad Men" hasn't been consistent on. Big questions abound: Will Sterling Cooper Draper Pryce remain solvent? What of Joan's bundle of joy? Is Pryce, in love with a black cocktail waitress and caned by his visiting father, going back to London for good? Will the secret of Don's identity spread further, as more and more characters know about it? 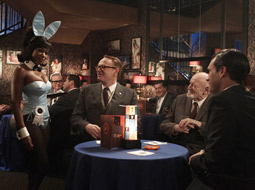 'Mad Men'
Credit:
AMC/Michael Yarish
But first, the near heart-attacks. For Draper, the palpitating moment marks the return of his repressed identity crisis. The fact that he wasn't born Don Draper, but instead grabbed that identity from a fellow soldier who died while fighting in Korea hasn't been a major source of tension this season. But that has changed with Sterling Cooper Draper Pryce's growing relationship with North American Aviation, a defense contractor that requires a background check. This sort of poking around is bad news for Don. It's even worse news that it's discovered by none other than Betty Draper, who in an interview at her home with a pair of Defense Department investigators, keeps the lie going. The conversation, as you would imagine, is loaded.

G-Man: "Would you regard Mr. Draper as loyal?"

When she tells Don, he gets frantic, immediately preparing for his own disappearance or, perhaps, suicide. In a rush, he sets up a trust for his kids, with Betty granted access. Sweaty and feverish, he has to be taken home by Dr. Faye. In a Kafkaesque moment at his front door, he sees two fellows lurking about who may or may not be G-Men. Don jabs his keys at the hole and, with Faye in tow, stumbles in. Turns out the gray-suited men were in the wrong building, but that doesn't slow Don's racing heart. We see him rip off his shirt with buttons popping, leaning on the couch, gripping his chest, eventually rushing to the bathroom for a thunderous puke. Afterward, lying in bed, Dr. Faye finds out Don's secret. At this point, that secret will cost the agency the account and Draper more than a little favor to Campbell, but not his life.

We haven't seen the generally unflappable Sterling rattled the way we have Draper, making the two moments where he does lose it all the more powerful. The news that Joan is pregnant, a scene in which both characters are portraits of calm, perhaps because they've both been through it before, doesn't cause the agitation that work does to Roger. The big blow comes from Lucky Strike's intention to end its long relationship and consolidate with BBDO, thanks to an aggressive board of directors that wants "one agency, one rate for all the ad work and all the brands." In a startlingly honest conversation, Sterling counters Lee Gardner Jr.'s matter-of-fact firing of the agency first with the practical -- the you'll-never-get-the-kind-of-attention-you-get here-at-BBDO argument. Then with mortality: "Are you trying to kill me?" Finally, he counters with morality, invoking "all the lies I've told for you." Gardner comes back hard: "I don't owe you squat. You inherited this account." You can almost hear the cracks forming in that patrician way of doing business, as relationships and family trees are replaced by efficiencies.

The second freak-out comes in a partners' meeting when Pete Campbell, taking the fall for Draper, lies that he flubbed the paperwork for the North American Aviation account and it's gone. Knowing what he knows about Lucky Strike but unwilling to reveal it, Sterling unleashes on him. Throughout these four seasons, Sterling has been all about (much-needed) comic relief: A bon vivant just past his prime spitting dry one-liners and oscillating between glib and charming. To see him so fit-to-be-tied and desperate is an indication of what lies ahead for an agency on the verge of losing its biggest account and its greatest hope for growth.

Lashed though he might have been, it's Pete who is the front-runner to come out of this season's wreckage as a winner. In the past, he used his knowledge of Draper's identity issues to try to get him booted. Now, he's smart enough to keep the creative genius around. Pete knows where his bread is buttered, yet he's not a weenie that will simply take Don's past behavior without comment. "I don't have to live with your shit over my head," he says. Yet -- and there's always another "yet" on this show -- he's self-righteous enough, when whining to Trudy about how people like Draper bring down all the "honest people," to have forgotten his own dishonesties.

It's not selling the episode short to say that, for all this drama, the greatest source of suspense resulted from the question of whether little Sally Draper would get her tickets to The Beatles concert at Shea Stadium. Don promises that at the beginning and, as girls did back then, she screamed. And screamed. And screamed. But it isn't clear those tickets are actually coming until the final scene, when Don's secretary hands them over. It's a relief, even if it's quickly wiped away by Don's ogling of his young secretary as though she were a big tumbler of Canadian Club ready to be slurped down. Is Don, who seems tight with Dr. Faye, backsliding into his lit lothario persona? Another question.

One thing there isn't a question about is whether Roger Sterling will use his 30 days to do some maneuvering to save Lucky Strike. He's already making late-night calls, Smirnoff bottle in hand, to people who turn out to be dead.

Here's how former Ad Age Editor Fred Danzig saw that scenario: "We see Sterling working his list -- telephoning influentials, board members and friends of board members, to enlist their aid. This is the real agency world. When American Motors (Jeep) fired Geyer Morey in 1968, Ted Bates said, on learning the news, 'Let's see: Who do I know on that board?' Asked if he really knew anyone there, he said: `'No. But I will by the end of the day.' Oh, by the way: The account went to Wells Rich Greene. Mary Wells' hubby, Harding Lawrence, already knew people on the board."

My hunch is that Sterling will go a bit more sinister and try some sort of quiet, wink-and-a-nudge blackmailing of the client, who behind his man's man facade is, in fact, on the down-low. He's the one who cost the beloved Sal his job back in a prior season.