What You Missed on 'Mad Men' Last Night: Racing to the Nadir | Ad Age
Skip to main content
Sign In Register

What You Missed on 'Mad Men' Last Night: Racing to the Nadir

Matthew Creamer's Review: A Too-Real Look at Agency Destabilization
READ THIS NEXT
The 'Mad Men' Prop Auction: 5 Items You Need At Your Agency

In the 1980s, Irish management thinker Charles Handy popularized a four-party classification system of organizational cultures. One of the types is power culture, described by Handy as a web-like structure commonly found in, as one online summary of Handy's thinking puts it, a "family operation with strict responsibilities going to family members. Responsibility given to personalities rather than expertise." 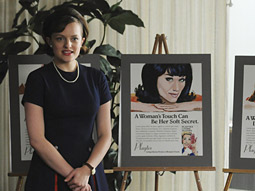 "The ability of the power culture to adapt to changes in the environment is very much determined by the perception and ability of those who occupy the positions of power within it. The power culture has more faith in individuals than committees and can either change very rapidly and adapt or 'fail to see the need for change' and die."

Late in the summer of 1965, Sterling Cooper Draper Pryce was not, strictly speaking, a family-owned business. Nevertheless, the presence and extreme influence of Roger Sterling, whose sole value is his inherited relationship with the agency's largest client, has been a nasty vestige of that old culture that just might undo the fragile young agency. To say that Sterling lacks expertise would be an understatement. His only job, as is constantly noted, is to keep the Lucky Strike client happy, something he's done mainly through long boozing sessions with Lee Garner Jr., the closeted good ol' boy who too has inherited his clout, not earned it.

Since setting up the new agency, the white-haired, weak-hearted Sterling, for whom death has been always felt a smoke away, is mainly concerned with his legacy as the end approaches. But his memoir, which we finally see in published form in last night's episode, is bound to be a joke, more self-involved, inside baseball about his patrician upbringing than the useful management lessons that were then being devoured in Ogilvy's famous book, "Confessions of an Advertising Man." With the Lucky Strike loss now known to the other partners and the agency rank-and-file, Sterling has burnt down to the filter. His work is done and his respect is gone, even without the other partners being wise to the staged phone calls and fake trip to Raleigh-Durham that so pathetically marked the end of the Lucky Strike chapter. Longtime partner Bert Cooper stamps him out: "Lee Garner Jr. never took you seriously because you never took yourself seriously."

This is not the end of the power culture at SCDP, but a reordering of it. The shock leaves the partners scrambling to assure the clients who remain that the lights will not be turned off. Draper, who prides himself on challenging clients, reverses himself, telling his creative team to butter them up. "Clients' ideas should seem better than they usually do." One of Draper's minions observes the fall of Rome feel to the place. As that civilization burned, legend has it, Nero fiddled. As Sterling Cooper Draper Pryce implodes, Don diddles and Roger twiddles his thumbs, flailing at Joan and then returning home to his rarely-seen young wife Jane, seen paging through fashion magazines amid their opulent homes, the strains of violin and piano heard in the background.

To no one's surprise, Don ends up bedding -- or, more precisely, office couching -- his new-ish secretary, Megan, who charms him with dreams of working in advertising. She fixes his Clio won for Glo-Coat, smashed after that client also tells Draper it's moving out, and makes her move in his desperate hour. After all, the fastest way to an adman's heart is through his ego. And Don, of course, no longer has willpower. Or what willpower he has is spent keeping his drinking in check. Whatever, that quick romp sets up another mess in the making, what with Draper's relationship with Dr. Faye deepening. The market researcher has become enamored enough with "the most hireable man on Madison Avenue" that she succumbs to his request for meetings with unhappy clients she knows of, requiring her to violate agreements with other agencies who pay her. Faye puts her ethics aside and Draper gets a meeting with Heinz.

The show's fourth season has been a race to the bottom between Roger, in his professional dotage, and Draper, with his personal rot. With two episodes left, it looks like the race will end in a tie.

But there is a bright side. Peggy has found what looks an awful lot like love in the form of literary agitator Abe Drexler, while Pete has a new baby girl. The two also manage to thrive professionally, with Peggy nailing a Playtex meeting and Pete fighting off advances from the cloying Ted Chaough, who wants Pete's new-business expertise in return for a third of the shop. One would imagine Campbell won't have much trouble turning that one down; his hatred for Chaough is clear. However, that opportunity, which gleams a bit brighter because of Pete's recent rough treatment from Draper and Sterling and the chaos engulfing the agency, highlights how important the young account man is to the change-or-die moment the Sterling Cooper Draper Pryce is now facing.

Last night's episode was striking for the detail it brought to one of the most traumatic of agency experiences: the loss of a major client. Fred Danzig, a former Ad Age editor and my partner in judging the historical accuracy of "Mad Men," called it the "most authentic hour of 'inside advertising' ever seen on TV." One example is the minor subplot that had Pete, Don and Freddie Rumsen attending the funeral of an agency rival. Mr. Danzig wrote me in an email: "Why would they bother? They saw a new-business opportunity, that's why. Might run into an old acquaintance who now happens to control an account." Afterward, we had one of those rich little scenes, when Megan simply asks him 'How was the funeral?' Always an adman, he answers: "We'll see."