Matthew Creamer's Recap
READ THIS NEXT
The 'Mad Men' Prop Auction: 5 Items You Need At Your Agency

From those wonderful folks who brought you the senior adman singing in blackface, we get a cruel, water-filled paper-bag attack on a group of civil-rights marchers. So begins the long-awaited fifth season of "Mad Men," with a punch to the historical gut, a note to tell us that hating the movement wasn't just for Southern crackers. Especially among presumably educated urban white-collar workers, we are reminded, it was not always a revered thing. 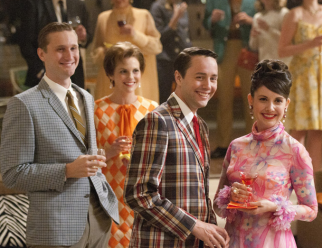 We know race will become a central plot element this season, which is set in 1966, when riots flared in no fewer than 43 American cities. The summer was especially bad, and it's no accident that the action picks up right after the Memorial Day weekend, setting us up for a localization of national themes. On Madison Avenue, pranks and irony take the place of brickbats and water hoses.

That opening scene, wherein some junior types at Y&R douse a clutch of protesters whose chants are wafting in through their windows, managed to startle me. But not the folks at Sterling Cooper Draper Pryce. The white men who run the agency receive the news with same smug hallway banter they use to talk about accounts or women. Out of that glibness comes a joke that could change the nature of the agency: An ad touting SCDP as an "equal opportunity employer" takes a poke at Y&R but also produces the unforeseen effect of filling the lobby with black job-seekers.

SCDP couldn't seriously claim the high ground, of course, even if it wanted to. As the season opens it still has no black employees to be seen. But as Tanner Colby recently demonstrated in a pair of great essays for Slate, some of the biggest and best-known agencies had begun making their ranks more diverse by the mid-1960s, thanks to pressure from the Urban League.

If the joke ends with SCDP hiring a black employee, the fledgling fictional agency will be catching up to history, not blazing trails.

But that 's OK. Morals, in Matthew Weiner's universe, are come by provisionally and accidentally. Recall how the agency began its shift last season from Lucky Strike's shop to an anti-tobacco crusader. Draper's "Why I Quit Tobacco" ad was less than an act of moral expression than a business gambit: business-page code for we quit Lucky Strike, not the other way around. Narratively speaking, it's quite deft: a way of pushing the agency into the zeitgeist's cultural vicissitudes without forcing an earnestness on characters who have none. They can remain the moral ciphers we've come to know and, I suppose, love.

Going deeper into the question of race will be important, if only to spice up the existing set of storylines, which felt a bit moldy Sunday night. Two-hour premieres are tough business, especially with a pace as, um, deliberate as "Mad Men," and I think it's clear that some new conflicts and new blood could pay off.

In the meantime, instead of new blood we have blue blood, and the ancient tension between Roger Sterling and Pete Campbell, old account baron and new. Sterling, whose business success is an alchemy of heredity and je ne sais quois, seems to now exist only for his pithiness and an ability to carry off a light-gray suit/white-hair combo that is chromatic magic. Last night, we saw that a growing irrelevance to the business that bears his name has not harmed his way with words. My favorite from last night: "There's my baby," he coos as Joan visits the office with their illegitimate spawn, referring not to his son but to Joan. But he's now a disruptive figure, knocking up the office manager and getting in the way of Campbell's new-business drive.

Pete, it's clear, has become the pulse of the agency, even if he doesn't command his elders' respect or a reasonably sized office. He owns the accounts and, with Sterling bon vivant-ing, Draper playing maison, Cooper zenning out and Pryce morphing into a sexualized Walter Mitty, Campbell seems to be the only one actually doing any work. Having shed the spoiled-rich-boy act that initially put him at odds with Don, he's become surprisingly sensitive. Of the SCDP partners, he is the only one to register distaste at the Y&R water balloon salvo. And he's not happy with Sterling's cigarette smoke in his office, either.

Then there's the tension between Don and any woman caught in his web, in the present case Megan, his young French-Canadian wife, who is , we are frequently reminded, more than capable of belting out a tune. Last season it was the innocent "Frere Jacques," sung to the Draper children. Last night it was "Zou Bisou Bisou," a gently suggestive 1962 pop hit performed at a surprise party for Don's 40th. Megan's burlesque-tinged, Twitter-pleasing performance hammered home the point that the new Mr. . Draper is of a younger and more liberated generation, something that Don has been slow to grasp. Delivering mod design along with a touch of the free love and some professional ambition, she is the threshold between the relative conservatism of the mid-1960s and the end-of -the-decade bacchanal.

Don, predictably, is not happy about the surprise fete, a party mainly filled out by the work gang and a sprinkling of randoms, including Stan's sailor cousin, fully decked out in his whites. The bonhomie among the characters -- along with the technicolor art direction ralphing those plaid jackets, zebra-print pillows and white carpeting into your living room -- felt like a "Laugh In" skit as directed by Wes Anderson. That's less a criticism than a wish granted, but for Don and Megan the party becomes a wedge that can only be removed by a light-BDSM rut on the aforementioned and worse-for-the-wear white carpet.

With SCDP courting Heinz -- or at least its vinegar, sauces and beans division -- it's worth pausing for a bit of historical context.

Presented with a bean-ballet idea for a TV spot, the Heinz client balks and asks for something that will make its staple of wars and recessions something approaching cool. That's actually not an unreasonable request coming from a client, even if his suggestions, like a picket line full of pro-bean marchers, miss the mark.

Heinz was doing some cool stuff back in the mid-1960s. In 1967, a British ad man would come up with a new tagline that helped make the canned beans ubiquitous in Brit diets and a Yank-confounding part of the traditional English breakfast. Thirty-three years later, "Heinz Means Beanz" was voted best ad slogan ever in a British poll, besting everything including "Just Do It."