What You Missed on 'Mad Men' Last Night: Crawling Under the Bed | Ad Age
Skip to main content

What You Missed on 'Mad Men' Last Night: Crawling Under the Bed

Fear Becomes Inescapable
READ THIS NEXT
The 'Mad Men' Prop Auction: 5 Items You Need At Your Agency

During her impromptu, botched sleepover with the new African-American receptionist, Peggy, emboldened by booze, the story of her own success and some white self-righteousness, folds her legs under herself, straightens up and tipsily asks, "Do you wanna be a copywriter?" 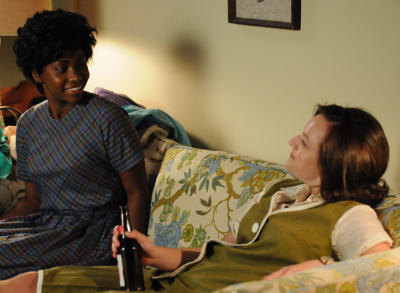 Mind you, Dawn is the only nonwhite employee at Sterling Cooper Draper Pryce, powerless, an office curiosity, and liable to sleep there when she has to work late because cabs won't take her to Harlem and because her brother, worried about racial tensions, forbids her to take the subway. Still, she has no interest in a higher-paying job as a copywriter.

Presuming she hadn't somehow seen AMC's "The Pitch" and its cringe-worthy depiction of the contemporary ad business, Dawn's resistance must have to do with the silliness of what goes on around her. We don't get this directly but have to divine it from her plain-talking observations, such as "Y'all drink a lot" and her barely expressed bafflement at the marvel that is Don Draper. You know she's having a lot of "Stuff White People Like" moments what with the coffee-drinking and difficult breakups. But Peggy misses all this, thinking she's found some common ground when she hasn't: "You're right. Copywriter's tough, especially for a woman. Do you think I act like a man?"

Great as this exchange is , it's sex, not race, that was the point of last night's show, which put the idea of acting like a man under psychoanalysis and in which sexual violence oozed like a fog that chilled every nook and cranny of the plot. The backdrop is the rape and slaughter of eight student nurses by an attacker who talked his way into their Chicago dormitory. A New York Post headline screams "Nation Hunts Mass Killer," and the characters whisper and natter about the prurient details. Hollywood had yet to make serial killers stars at this point, so there's just a foreshadowing hint of the torture-porn titillation that worms through our own culture.

We get this in just-hired copywriter Michael Ginsberg's over-the-transom (and Draper-infuriating) pitch to Butler Shoes. His idea, teed up as "too dark," stars a wounded Cinderella, hobbling near a castle at night and pursued by some unknown, handsome stalker. "She knows she's not safe," Ginsberg tells the rapt Butler guys. "But she doesn't care. In the end, she wants to be caught." Earlier in the show, Ginsberg is revolted at crime-scene photos of the massacre, but then he delivers this commercialized rape fantasy to the guys at Butler , who eat it up. The message here: They know not what they do.

But the looming threat of violence isn't all historical or abstract. 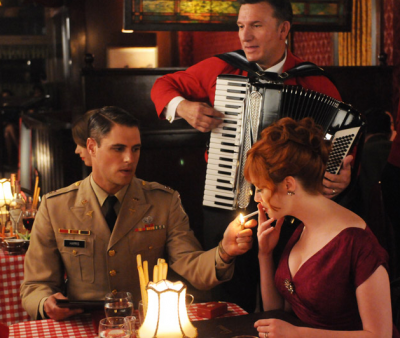 Joan, who was actually raped by the man who would become her husband and later mugged in a crime that would result in her illegitimate child, welcomes hubby Greg home from Vietnam. War has been good for hubby Greg, giving him meaning and transforming an ineffectual and frustrated civilian doctor into an important figure with his military life. But when Joan finds he's signed up for another tour of duty despite having a young baby, she ships him out for good.

"You're not a good man and you never were, even before you went over there," she tells him. "And you know what I'm talking about." That would be the rape scene from season two, one of the show's most difficult moments.

Meanwhile, Don, in a fevered dream state, acts out his own violent fantasy against his unfaithful past. The real-world trigger is an elevator encounter with a freelancer he used to sleep with. This goes on in full view of new wife Megan, who, she makes it known, is sick of these situations. In bed with a fever and nasty cough, Don sees the freelancer, Andrea, in his dreams. At first, he fends off her attempts to seduce him but eventually succumbs to her. It all ends with him choking her to death and kicking her body under the bed -- Don once again killing his past, or at least trying to.

At this point, we already know that the lone survivor of the Chicago massacre made it out alive only because she hid under the bed and, to make this resonate further and more bizarrely, we see Don's daughter Sally sleeping under a couch in the next scene. It's an eerie, off-putting juxtaposition.

Sally, cooped up in the Francis' Gothic suburban compound -- scary in and of itself -- is starting to wrap her mind around the viciousness of the outside world. She begs her visiting step-grandmother for details of the massacre. Grandma Pauline finally relents and diabolically frames the murders as a gentleman-caller-as-homicidal-maniac tale that we can link associatively with an actual commercial we saw earlier in the show. That the ad is for a Milton Bradley game, Mystery Date, doesn't make the clip any less creepy given the context, with its swooning, trusting little girls opening up doors for men they don't know.

Needless to say, little Sally isn't sleeping after that one, not on her own and not without a dose of Seconal, the widely misused barbiturate that probably killed more people in the 1960s than all the serial killers combined. Betty and Henry return home to the paranoid scene of Sally and Pauline both dosed and a butcher knife nearby. Then there's a cut to the final scene: Joan, her baby and her mother lying in bed. A siren wails before giving way to closing credits and The Crystals' thematically self-explanatory "He Hit Me (It Felt Like a Kiss)."

Fear in "Mad Men" has usually trickled down from big historical events, most memorably in the season-two Cuban Missile Crisis-derived panic. But with violent crime on its steep, three-decade incline in the late-1960s, it only makes sense that threats from within show themselves more and more. Fear is becoming less linked to particular events and more of an inescapable part of everyday life.