What You Missed Last Night on Mad Men: Tobacco, No; Postmodernism, Yes

Matt Creamer's Recap
READ THIS NEXT
The 'Mad Men' Prop Auction: 5 Items You Need At Your Agency

When we see the ideas that spring from Don Draper, they tend to be deeply felt, wrenched from a well of longing and self-loathing. Think the Kodak pitch at the end of season one, which left Harry Crane bawling. Or, more recently, there was the award-winning Glo-Coat spot that transformed a floor wax into an evocation of the power of a child's imagination. But for Draper's greatest challenge, the rebrand of a nearly pauperized Sterling Cooper Draper Pryce, he leaves behind the heartstring-tugging imagery and goes for something, shall we say, a bit more Peggy. 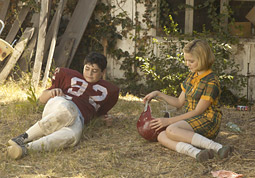 Sally Draper and Glen, the chubby stalker-ish neighbor boy, rendezvous.
Credit:
AMC
From the beginning, the young copywriter has had an eye for the stunt that will get people talking. You could see it in the housewife fight at the supermarket that she organized for a ham client, and you could see it in her suggestion for what to do with an agency that, having lost its biggest client, is facing a marketplace buzzing with talk of its demise. A potential Heinz client has informed Draper he's concerned the shop won't be around in six months, and Philip Morris, a possible replacement for the departed Lucky Strike, has said about the same thing. Even more dire, the bank asks the agency partners to cough up their own cash for collateral on a credit-line extension. Don rejects Peggy's suggestion that the agency change its name. Or, rather, he appropriates it.

Tearing out the pages of a journal meant to be a boost out of his deepening alcoholism, Don turns over a fresh page and pens an open letter, copy for an ad to appear on a full page of The New York Times. The agency, ditched by tobacco, is ditching tobacco. Whatever marketing truism you want to apply here -- turning a strength into a weakness, changing the conversation, whatever -- this letter is just more branding, the market research in this case coming from Draper's season-one paramour, Midge, who shows up heroin-addled and, along with her milquetoast husband, begging her former lover and now Greenwich Village neighbor to buy one of her awful paintings. The resulting non-manifesto is the fictional forerunner of any number of cockamamie agency-branding exercises that are figments of some executive's imagination rather than an articulation of what the agency really is.

This isn't quite Don Draper's "Jerry Maguire" moment. That would require a reception that's fake acceptance masking revulsion. From his partners, pissed they weren't consulted and that this is the last nail in the coffin, Don receives out and out anger. From the rank and file, pissing themselves that their jobs are gone, he gets wary looks. Only his receptionist, Megan, is truly admiring -- and for the wrong reason. "I love that you stand for something." Draper replies, "That's not what it's really about." From the marketplace, Don gets jokes, such as a phone call from a rival posing as Robert Kennedy, but he also gets the buzz he wants. (One of the calls comes from Emerson Foote, who makes for an interesting historical footnote described below by Fred Danzig.)

One of the overarching themes in "Mad Men" is the plasticity of advertising and consumer culture, a thesis that doesn't need a particularly long proof. As we move into the season finale, we're left with news that the American Cancer Society is trying to raise Don to talk about an anti-smoking campaign, sure to pay in good PR rather than in money. Sterling Draper Cooper Pryce has taken a convenient moral position birthed by desperation that may or may not bail the agency out and may or may not lead the agency to do something important culturally. It's yet another articulation of the question repeatedly asked by the show: Can a lie lead to something good?

Of all the questions surrounding the characters, there is no doubt that young Sally Draper is her father's daughter. Her own double life has her bouncing from the suddenly well-behaved child that pleases both her mother and her psychiatrist to weird rendezvouses with Glen, the chubby stalker-ish neighbor boy who has turned up wearing football gear and offering a smoke.

In one of those meetings, Sally establishes herself as perhaps the world's first postmodern thinker in a bit of brand-conscious and, to my mind, show-stopping dialogue that might make her dad either very happy or extremely angry.

"I wish you hadn't said that," replies Glen.

Postmodernism, which began to take hold in academia and culture in the 1970s, had at its heart -- to the degree it can be said to have one -- a notion of reflexivity, of referring to one's self, as the Land O' Lakes girl does, and a very slippery, relativistic notion of a thing's intrinsic meaning. Which is to say it doesn't have one. Compared to, say, "Seinfeld" in the 1990s, which became a TV show about a TV show, "Mad Men" isn't terribly self-conscious, the one possible exception to this is the integration of brands into the show that also appear during commercial breaks.

But this episode changes that. Now we see Don, who at the the beginning of the season resisted doing PR for the agency, make his business a brand. Aided by Peggy's proto po-mo thinking, he makes an ad about an ad agency on a show about advertising supported by ads. With Sally, you can to some degree see the shift from a mindset in which meaning is, rather comfortably, created out of nothing in the form of brands, to a more conscious state, one where that infinite nothingness reflected in the Indian girl who refers only to herself, is now recognized -- and met with angst, even horror.

Before Don Draper's secretary told him, the morning after his signed anti-tobacco full-page ad appeared in The New York Times, that Emerson Foote had called -- and wondered who he was -- I was already thinking about poor old Emerson. At about that time, November 1965, he was begging for work in a full-page Advertising Age ad that he wrote. He wanted another "opportunity to serve in the advertising business." Mr. Foote -- a manic depressive and once a chain smoker -- served the legendary George Washington Hill and the American Tobacco Co.'s Lucky Strike account while at Albert Lasker's Lord & Thomas and, much later, at the successor agency, Foote Cone & Belding. (See the 1947 film, "The Hucksters." Adolphe Menjou plays him; Sydney Greenstreet plays Hill. In 1948, Foote shocked the world by resigning the $12 million Lucky Strike account for reasons of conscience, and he would later leave FC&B to work for various anti-tobacco organizations in the governmental and private sector, including the American Cancer Society and the Menninger Foundation.

But Madison Avenue's lures were irresistible and by 1952, he joined McCann-Erickson as exec VP and became president, then chairman, resigning in 1964. For reasons of conscience, the story went, he opened his own little consultancy/agency in New York.

His Ad Age full-pager drew about 100 replies, including one from Kastor Hilton, Chesley, Clifford & Atherton, who were fresh from being convicted by a jury and fined $12 million for fraudulent advertising involving Regimen, a weight-loss tablet. With Mr. Foote aboard, the new-and-improved agency became Kastor Foote Hilton & Atherton -- and continued to struggle. By 1967, known as Emerson Foote Inc., it was swallowed up by the surging Bozell & Jacobs, and Mr. Foote's storied -- and troubled -- active advertising career ended. He died in July 1992, at 85.

"Who is he?" Megan wondered. The name didn't seem to register with Draper, either. Too bad. We could have had a new shop on the show, Foote Draper Inc.