What You Missed Last Night on 'Mad Men': Looking Ahead to Tomorrow | Ad Age
Skip to main content
Sign In Register

What You Missed Last Night on 'Mad Men': Looking Ahead to Tomorrow

Matt Creamer's Recap: Finale Finds Draper and Co. Moving on
READ THIS NEXT
The 'Mad Men' Prop Auction: 5 Items You Need At Your Agency

Right before a pivotal scene in the thirteenth and final episode of this season of "Mad Men," we see Don Draper lying in his hotel-room bed in Los Angeles, struggling to keep his attention on a paperback. If you squint, you'll see the book is "The Spy Who Came in From the Cold," the famous 1963 thriller from John LeCarre. As intertextual allusions go, it's an interesting one. LeCarre's book is about betrayal and moral ambiguity, two of the most persistent themes on "Mad Men," both of which were on display in the finale. 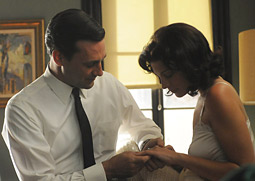 Don and Megan get engaged.
Credit:
AMC
But I think a more useful way to think about this season is as a twist on the marriage plot, a form very popular among novelists of the 18th and 19th centuries that, basically, is about the obstacles characters encounter on their way to the altar. Instead of a young Victorian woman desperate to tie the knot, however, we have a man in a gray flannel suit. That Don will get hitched has been inevitable. As Joan said, "They're all just between marriages." What's interesting is the journey.

Our hero's journey began this season with him reeling from his divorce from the already-remarried Betty. Don quickly turns out to be awful on his own: drunk, confused and noncommittal where women are concerned. The finale's script verges on heavy-handedness in reminding Don -- and us -- that there is a gaping hole in Don's being where a wife used to be. There's Don's lawyer with his "Don't you want to go home someday and see a steak on the table?" More subtle is Cosgrove's decision not to court a client in a way that would betray his wife to be. "I know that every account will leave me. But Cynthia's my life, my actual life."

Don, who has seen more than his share of accounts go this season, clearly needs to replace Betty if he is going to survive. The only question is with whom. Of the candidates lined up for us, Dr. Faye, the market researcher who's been around the block a bit and is something close to a peer, would of course be the right decision. Which is why you know it would never happen. I haven't found her to be terribly likable, mainly because her dialogue is stilted with psychobabble. But she is wise and warm and patient with Don and would seem to get him more than anyone but Don's soulmate/work wife, Peggy. Then there's Megan, the 25-year-old secretary who Don had a one-night stand with midseason.

Megan, of course, wins. When Don puts down the LeCarre book and walks to the room next door, it is she who answers his knocks. Megan is along for the California vacation to act as nanny for the Draper kids, filling in for Carla, who Betty fires mercilessly in a rage. There's more sex, a bit of soap turgid dialogue and --voila! -- Don and Megan are engaged. Don conveniently has a rock with him in California, the late Anna's old engagement ring from the real Don Draper. As these sorts of things go, Megan doesn't seem to be an entirely bad call. She has a nice touch with kids, getting them to sing French songs and keeping everyone calm after a milkshake spill. She even elicits a cannonball from Don in the hotel pool. Whether she turns out to be purely ornamental like the show's other secretary-bride, Roger's Jane, remains to be seen in the fifth season, if there is one.

Back in New York, the engagement is treated as a joke. Besides not knowing her name, Roger Sterling asks her to get some ice during the celebratory drink. We see Joan gossiping about the engagement with Peggy and then on the phone with her husband in Vietnam who, to my surprise, made it through this season without getting blown up. The point in all of it is that this is just what was done. There's surprise -- but also not. Well, it was a big surprise for Dr. Faye, who is summarily let go by Don in a post-engagement phone call. Faye, to her credit, refuses to meet Don for a coffee where she knows he's going to dump her. She makes him do it on the phone, so as not to waste her time. Then, she hits him with this: "I hope she knows you only like the beginnings of things."

As I said, I've never really warmed to the character of Faye, but that didn't prevent her rejection from being one of the more moving moments in finale that otherwise was very plot-heavy and, generally speaking, probably one of the less remarkable episodes of what was a very good season. We do see Don begin the process of unraveling his secrets for his kids. In Anna's house, Sally, staring at the wall he painted now marked with their names, asks "Who's Dick?" He replies, "Well, that's my nickname sometimes." It's a start.

We also learn -- to no one's surprise -- that Joan has indeed kept Roger's baby and she's going to pass the little bundle off to her husband as his. Hopefully, it won't come out of the womb with white hair. And, it looks like Sterling Cooper Draper Pryce, nearly eviscerated by the loss of Lucky Strike, is going to stay in business, at least for the near term. Thank Peggy and Cosgrove, who discover that Topaz, a pantyhose maker, has just fired its agency and needs to get a bunch of work done fast. A few quick ideas and -- voila again -- there's another $250,000 in revenue coming their way. It certainly won't replace the cigarette brand, but it's evidence that Don's open-letter gambit, wherein he makes SCDP an anti-tobacco shop, hasn't sunk the boat. A meeting with the American Cancer Society seemed like it might go somewhere.

The overall feel of the episode is to tie up loose ends and move on. We see a new agency now truly different from its older version, and set to survive. We see Sterling on the sidelines and the team of Campbell, Peggy and Cosgrove on the rise. We see two houses packed up, Anna's and Betty's.

Betty and Henry are moving to a new house and Don is listing the old one. The show and the season, for all intents and purposes, ends in the Drapers' kitchen, much the way season two did. Back then the fadeout happened as Don and a pregnant Betty were left quaking from the Cuban Missile Crisis. It turned out that, in the end, the only thing that got nuked was their marriage. Still, there is time for one moment together. Don finds a bottle of Canadian Club tucked away in a cabinet and they share a drink from a cup pulled out of a packing box, but nothing more. That would be looking back, and this episode is called "Tomorrowland," after all. As little Bobby Draper says while poring over a map of Disneyland, "I don't want to ride an elephant. I want to fly a jet."

*******************
Marrying one's secretary was a well-established practice in the ad business, with none other than Bill Bernbach taking part. Fred Danzig, former editor of Ad Age narrates:

After he graduated from NYU in 1933, Bernbach got a job running the Schenley Distillers mailroom. This was during the Depression and a family connection got him the job. One of his assistants -- she addressed labels on outgoing mail--was Evelyn Carbone, a college student at Hunter. He eventually worked up to the executive suite and she became a receptionist. They fell in love and got married in 1938 by a justice of the peace. His family was intensely against this marriage on religious grounds, but they lived happily ever after and had two sons. Bill Bernbach would enter the ad-agency field in 1940 at the old William Weintraub agency. Evelyn was a power behind the throne at DDB ... she had great influence over Bill in many areas, except, of course, the creative side. After his death, she and Bob Levenson -- the DDB creative leader -- published "Bill Bernbach's Book: A History of Advertising that Changed the History of Advertising."