Throwback Thursday: More Ad Age Stories from 1969
READ THIS NEXT
The 'Mad Men' Prop Auction: 5 Items You Need At Your Agency

On Sunday's episode of Mad Men, thanks to the office's new IBM 360, creative Stan Ginsberg lost his mind, as well as a nipple. Don Draper also reunited with his niece Stephanie and crashed a big meeting between SC+P and potential tobacco client Phillip Morris. Meanwhile, the former Mrs. Draper got belittled by hubby Henry -- "Leave the thinking to me," he said. Even though, as Betty professed, "I'm not stupid. I speak Itallian."

But what was the real news from the ad world at the time? Find out in this edition of Throwback Thursday Ad Age Headlines, pulled from June, 1969.

More on the show and the era here. 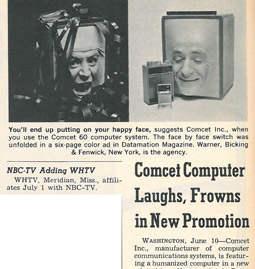 Stan Ginsberg might have freaked even earlier had he seen the new ad covered in this article about Comcet computers. The commercial features a humanized computer -- disturbing human face and all -- created with a combination of makeup effects and photography. It was created out of Warner, Bicking and Fenwick New York. 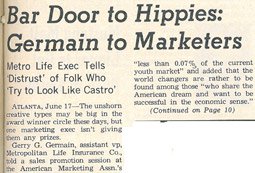 Lou Avery would have found a soulmate in Gerry Germain, assistant VP at Metropolitan Life Insurance Company. This article describes a talk Mr. Germain gave at the American Marketing Association's International Marketing Congress. He decried ad agenices' "rather unbusinesslike approach to the problem of creativity" and the hippie types whose lifestyles are counterintuitive to the main goal of advertising. "Agency people who 'look, smoke like Che Guevara' raise the question 'Is he in support of our economic system or is he in sub rosa revolt?' ... If I were an ad manager, I'd look for and demand an agency group that was bright, young, well-shaven, well barbered and profit minded." 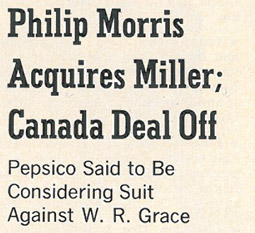 In this week's episode, SC+P, including lunch meeting-crasher Don, wooed Phillip Morris for its Commander cigarettes account, but the tobacco giant's real news at the time was its acquisition of Miller Brewing Co. from W.R. Grace and Co., New York. It paid $130 million in cash for 53% of the Milwaukee brewer's stock, following a breakdown in negotiations between the beer company and PepsiCo. 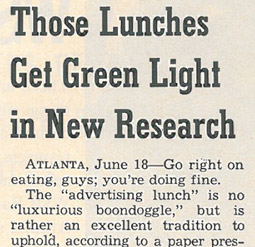 Client Lunches Worth It, Research Shows

Speaking of lunch meetings, this June 18 Ad Age story described how indulgent ad lunches actually yielded productive outcomes. A study by Grey Advertising and Rutgers University noted that agency-client lunches were longer (90 minutes to 2 hours), more expensive (a whopping $4.50 - $6.49 per person vs. $1 - $1.49) and more personal than typical business meals.Yet they were far from a "luxurious boondoggle" and served a" useful purpose in carrying out and developing advertising and marketing plans." 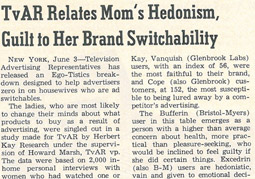 Moms were a big focus of advertisers, then as now, as evident in this piece on a study by the Television Advertising Representatives on the "Ego-tistics" of moms when it came to various brands and their likelihood to switch after seeing a TV commercial. A breakout chart on remedies, for example, showed that moms who used Vanquish headache medicine were most loyal to their brand, while users of Cope more likely to switch. Cope users were also far more guilt-ridden, vain and status-seeking. 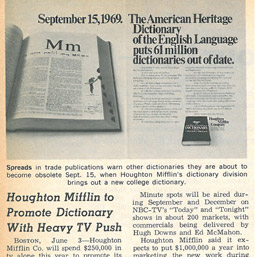 Now this, we would never see today -- a piece about a $250,000 TV campaign pushing the American Heritage Dictionary, which, according to the new ad, "puts 61 million dictionaries out of date."

Michelle Dopp
View all articles by this author