Hobnobbing with Mary Wells Lawrence, Jane Maas and More
READ THIS NEXT
The 'Mad Men' Prop Auction: 5 Items You Need At Your Agency

There's a wealth of buzz about the next season of Mad Men, the AMC soap opera about advertising that returns later this month. But the premiere will likely pale to what I got to do last night -- hang out with the real thing: legendary advertising folks from that era. 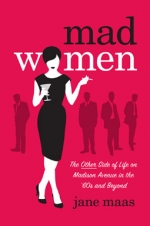 Ad Age Executive Editor Judann Pollack and I met them at the home of former Ogilvy Chairman-CEO Ken Roman, who's also the author of the David Ogilvy biography, "The King of Madison Avenue." The occasion? A fete in honor of Jane Maas, the author of "Mad Women," a new book that tells the story of life on Madison Avenue in the 1960s from the female perspective.

Mr. Roman and his wife, Ellen, reside in the penthouse of a building on Manhattan's Upper East Side that offers a panoramic view of the East River and Gracie Mansion (historically the mayor's official residence, but New York's current mayor, billionaire Michael Bloomberg, uses it only for meetings). The Romans' place is not just stunning but in a building that boasts a bit of ad history involving three different holding companies.

Several years ago, a number of rival ad execs all lived there at the same time. Mr. Roman told a story about getting into the elevator one morning in a suit and encountering former BBDO CEO Allen Rosenshine and ex-Interpublic Group Chairman-CEO Phil Geier, who were dressed similarly. The elevator stopped on another floor, and in walked Charlie Moss, former creative director at Wells Rich Greene, clad in a velour tracksuit. According to Mr. Roman, Mr. Moss cracked that he must have missed the meeting. Mr. Moss, who was present and didn't dispute the account, was a bit more formally attired last night.

It was an ad party after all ... so a bartender passed around drinks and canapes to a crowd that included the unrelentingly stylish Mary Wells Lawrence, in red pants and red pumps, and toting a snakeskin purse. (No one, however, was wearing a hat, which Ms. Maas said would have been required of female ad executives back in the '60s, indoors or out).

Jerry Della Femina was there, too, with his wife, Judy Licht, and we chatted about the sagging newspaper business and his selling off his East Hampton restaurant. He has no plans to open any others, he said, preferring to stick to his New York agency and writing his column, Jerry 's Ink, in the small Hamptons paper he owns.

There was Ogilvy Chairman Shelly Lazarus and one of my personal favorites, former McCann creative Laurel Cutler. I met her for the first time through Facebook, and during the course of the party she showed us the stylus she uses for her iPad -- so not to break her freshly polished nails.

About an hour into the event, the tiny but amazingly energetic Ms. Maas, sporting a lavender jacket with a unicorn brooch, was introduced by Mr. Roman and invited to say a few words. Ms. Maas, who is about to embark on a whirlwind 40-city book tour, said that she had been surprised at the candidness of ad women in speaking to her for "Mad Women." That quickly led to a few highlights from the chapter entitled "Sex in the Office," and one of her favorite anecdotes: copywriter Linda Bird Francke's saying, "I lost my virginity to the account executive on Jell-O."

Ms. Maas also told some fun stories about office love affairs and the like (sorry, they were off the record). Her proudest moment recently was being interviewed on NPR for her book. She said that when she was walking out, someone queried the receptionist about who was on-air that morning. The receptionist replied: "I dunno ... some old lady talking about sex."