Food Network Magazine Is No. 5 on Ad Age's Magazine A-List

After Its Foodie Competition Met Its Fate, Gamble Turned Into Unexpected Success, and It's Still Rising
READ THIS NEXT
How restaurant chains are duking it out to be the best in their categories

NEW YORK (AdAge.com) -- Last October, even as Gourmet became another victim of the ad downturn pummeling almost everyone in all media, the people behind Food Network Magazine actually had reason to celebrate: The risky venture they had begun the year before was reaching conspicuous fruition. 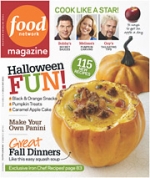 A year after it launched a test issue in October 2008 it hit one million in circulation. And it has continued growing fast. Over the first half of this year, Food Network Magazine averaged paid circulation just a hair below 1.4 million, according to its report with the Audit Bureau of Circulations.

It thrived on other fronts as well. Its issues from January through September of this year ran a combined 502 ad pages, up from 273 in the period the year before as the magazine added issues and advertisers, according to the Media Industry Newsletter. This spring it was nominated for a National Magazine Award in the general excellence category. And the web is actually feeding the print edition: more than 810,000 subscriptions have been sold online to date, according to the magazine.

Publisher Vicki Wellington said the title's meteoric success left her and its owners -- Hearst Magazines and the Food Network -- somewhat shocked; they figured it would do well, but not quite so quickly. "It's a great surprise, and it's a great brand," Ms. Wellington said. "We launched while a lot of budgets were spent, so we had to work hard, and we had to work smart."

Brand integration has been a chief component of the magazine, with content and cross promotion spanning the cable channel, the Food Network website and the magazine itself. It prominently features celebrity chefs such as Guy Fieri and Cat Cora, and is seeing increased ad buys in some areas outside its core focus such as auto and travel.