Parenting Is No. 6 on Ad Age's Magazine A-List

Magazine Grows Its Family of Products, Finding One Size Doesn't Fit All When It Comes to Child Publications
READ THIS NEXT
How restaurant chains are duking it out to be the best in their categories

NEW YORK (AdAge.com) -- In February 2009, Bonnier Corp.'s Parenting introduced a "versioning strategy," in which it split itself into two editions, Parenting Early Years and Parenting School Years. Given the timing -- right around zero hour of the economic implosion -- the decision struck many as unnecessary and potentially self-cannibalizing. 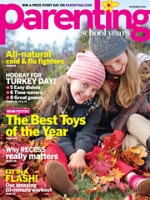 Executives at Parenting, however, remained convinced the decision was both smart and financially viable. They believed a one-size-fits-all approach had stopped making sense for many of the title's readers, particularly as the media universe continued to evolve toward niches. Moms with two pre-teens, for instance, had little interest in wading through toddler-centric content.

"Every mother, whether she was with the client or in media, thought what we did made complete sense in principle," said Greg Schumann, VP and group publisher of Parenting. "But when you're putting in media dollars, when you're in a position where you have to justify the buy, it's a little different. The hope was, 'If you give consumers what they want, the rest will follow.'"

The bifurcated-title concept picked up momentum toward the end of 2009. And it paid off in the issues from January through September of this year: Ad pages were up 18.9% in Early Years and 25% in School Years versus February through September 2009. The all-important back-to-school September issues of each title showed even more growth, with Early Years up 28.2% over September 2009 and School Years up 49.7%. New advertisers included Gap, Baby Phat, Amazon and Volkswagen.

The magazine also made hay with cross-media platforms, especially the education-focused "Mom Congress" summit in Washington, D.C., which adds Target as its corporate underwriter this fall.

"Not to sound self-serving and like a blowhard, but either you choose to evolve and innovate, or you don't," Mr. Schumann said. "There is a disdain here for the status quo."