Marketer of the Year Runner-Up: Chick-fil-A

Armed With a Beloved Product and a Strong Commitment to Customer Service, Fast Feeder Continues to Grow
READ THIS NEXT
How restaurant chains are duking it out to be the best in their categories

NEW YORK (AdAge.com) -- Often, the smartest marketing is the most patient marketing.

Just ask Atlanta-based chicken chain Chick-fil-A, which enjoys the kind of rabid following every restaurant brand dreams about but only rarely achieves. Even if you've never visited one of its 1,500-plus locations -- located primarily in the South but increasingly in pockets across 38 states and Washington -- you've heard of its famous chicken sandwiches, nuggets and reputation for customer service. Though it isn't America's largest chicken fast-feeder (that title still belongs to KFC, despite some high-profile marketing foibles), Chick-fil-A does do singularly impressive business, and it's stayed the course with the same marketing campaign for 15 years.

Since it opened in 1967, Chick-fil-A has seen sales growth every year (numbers were up almost 9% in 2009 alone, to $3.2 billion). The privately held company also manages to achieve better sales numbers on average per location than larger chains such as McDonald's, and in less time -- all Chick-fil-A locations are famously closed on Sundays, in accordance to founder Truett Cathy's Christian beliefs.

Chick-fil-A has worked with Richards Group, Dallas, since 1995, when it launched its quirky, cow-focused "Eat Mor Chikin" campaign that is still a fixture of its marketing strategy. It's also continued "Cow Appreciation Day," an annual marketing push that includes a bus tour of New York to offer items from its menu to rabid fans in a market famously devoid of a full-fledged Chick-fil-A location.

Unlike its competitors -- which includes Popeyes nationally and the already noted KFC -- Chick-fil-A hasn't made any major shifts, additions or changes to either its menu or its marketing campaign. It also opens fewer than 100 new locations each year, which, for such a high-earning company, is modest.

VP-Marketing David Salyers said this strategy is tantamount to one of Chick-fil-A's core values: focus on getting better before getting bigger. "We make decisions that many times don't pay off in the next 90 days," Mr. Salyers told Ad Age in July. "The success that we're enjoying today, even in the midst of this financial crisis, is not [based on] what we did yesterday, it's what we've been doing over the course of years. A lot of our competitors are kind of forced into 90-day cycles because they've got to report back to stockholders." 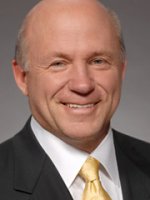 DAN CATHY: The son of Chick-fil-A founder Truett Cathy is the president-chief operating officer.
Meanwhile, as many other restaurants attempt to lure customers with coupons and discounts, Chick-fil-A has kept its prices relatively steady. While it has introduced new variations of its existing products -- such as the spicy chicken sandwich it launched this summer -- it hasn't had any huge departures from its core menu.

Analyst Darren Tristano, exec VP at food research firm Technomic, said consistency in Chick-fil-A's product and message is the key to its success. "There's an expectation to serve a very traditional product, but to add newer, bolder, spicier flavors," he said. "It's about trying to maintain high levels of service, high quality, not deviating dramatically, and giving customers an idea of what to expect."

While Richards Group handles the bulk of Chick-fil-A's marketing, its official social-media strategy is relatively new, having only been picked up by digital shop Engauge in February. Since then, the brand's Facebook following has nearly tripled, and social media has been integrated into many of its standing marketing campaigns, like Cow Appreciation Day, when it tweeted many New York followers the location of the Chick-fil-A bus.

While the chain continues its steady growth (it opened a much-requested location near Chicago last month), Mr. Tristano said its disciplined approach to marketing and development will continue to keep it in high esteem with customers. "They still have a lot of opportunity, and a lot of road left to conquer," he said.