Even if you don't watch TV, you'd be hard-pressed to escape the shadow of the "Duck Dynasty" empire. 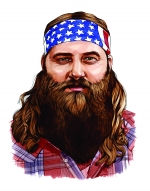 These days, you can't step into a Walmart without seeing "Duck Dynasty"-related merchandise from beach towels to sunglasses. The clan's got three books on The New York Times nonfiction best-seller list. And all of this from a reality show based on family-friendly hijinks -- rather than ginned-up shouting matches and catty gossip -- might seem like a long shot.

But the A&E reality show about the Robertson family of West Monroe, La., is a ratings smash. In its fourth season, "Duck Dynasty" is averaging 10.5 million viewers. The season premiere pulled in 11.8 million, making it the best-performing nonfiction-series telecast of all time on cable.

"Duck Dynasty" grew from the humble seed of Duck Commander, the duck-call business started by family patriarch Phil Robertson. "We were running a fairly successful business," said Willie Robertson, son of Phil, one of the stars of "Duck Dynasty" and the current CEO of Duck Commander, who was looking to grow the business. One stop along the way was a hunting-themed reality show on Outdoor Channel they thought "would be good for business." But Willie saw the possibilities of a more family-centered entertainment show. A&E did as well.

So the original duck-call business spawned a media product which spawned its own merchandise empire all the while helping the original business. For the casual observer, it's hard to tell where "Duck Dynasty" ends and Duck Commander begins.

"The No. 1 challenge these days is time management," said Willie.

What is your guilty-pleasure TV show?
"I'm into these true-murder/mystery shows."

What's your media consumption like?
Starts off his day the old fashioned way. "I feel like having a paper," he says. Because he's usually on the road, it's typically USA Today.

What device would you least like to drop into the tracks in front of an oncoming 6 train -- or out of the duck blind?
"For sure, my phone." He's recently made the switch to iPhone. "I had a BlackBerry forever and I would not get rid of it, mostly because I had a high score on Brick Breaker."

Which obsolete tech device do you wish you could have back?
"Eight-track tapes and records."

What's the strangest item in the "Duck Dynasty" empire?
"The loofah -- that one's pretty odd."