Despite Rise of Digital Music, Vinyl Makes a Comeback

Amazon, Others Connect With Consumers Who Relish Playing Records
READ THIS NEXT
How restaurant chains are duking it out to be the best in their categories

The audiophile community has debated the merits and weaknesses of vinyl recordings vs. digital since the first commercial CD players rolled out in the early '80s. Regardless, at the cash register, digital has clearly been the winner since then. But a funny thing has been happening -- and brands are taking notice. 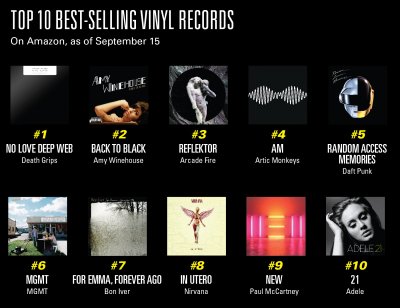 Through June, 2.9 million vinyl records were sold in the U.S. this year, a 33.5% jump from a year earlier, according to Nielsen SoundScan. Vinyl sales jumped nearly 30% in 2012, per data from the Recording Industry Association of America, and have been on a steady upward trajectory since 2006.

The growth has prompted retailers and marketers like Whole Foods and Anheuser-Busch to align themselves with the growing niche.

At a time when tunes can be accessed on-demand and free via platforms like YouTube, Vevo and Pandora -- allowing music to be transportable and literally fit in our pockets -- why would clunky vinyl records see a resurgence?

Call it nostalgia or retromania. But dropping a needle in a groove, flipping a record and listening to an album all the way through can offer fans a deeper level of engagement with their favorite music.

"The experience is similar to going to a concert," said Michael Kurtz, co-founder of Record Store Day, an annual event designed to celebrate independent music stores. "It's a more full experience and communal. You typically listen to a record player with other people gathered around … while digital is typically a solitary experience with your headphones."

While digital continues to represent the majority of music sales -- vinyl still makes up only 2%, according to RIAA -- brands are attracted to the potential to connect with consumers more deeply.

Beck's Beer, a sponsor of Record Store Day, has had a presence in record stores and, in conjunction with Universal Music Group, distributed special-edition vinyl records as a way to promote its "Live Beyond Labels" campaign, which allows musicians and artists to design bottle labels.

This summer, Whole Foods opened record shops inside five Southern California stores, offering LPs from the likes of Frank Sinatra, Daft Punk, the Rolling Stones, Paramore, Bob Marley and Tegan and Sara. Target.com has been expanding its assortment of records, too.

For Amazon, vinyl has been its fastest-growing music medium, with sales soaring 745% since 2008, according to the company.

Artists will find that the best approach is striking a medium. Providing consumers with a digital copy of a song or album along with the LP is helping to sell more vinyl, according to the e-commerce giant. In April, Amazon started giving vinyl buyers free digital copies through its "AutoRip" service when purchasing albums. Previously the service was only available to those buying CDs.

"Customers not only want to be able to listen to their music at home on their record players, but also when they're out and about," Ryan Redington, head of Amazon's digital music store, said via email. "In this digital age, you're missing the mark if you are not providing products and services that meet all of your customer's needs."