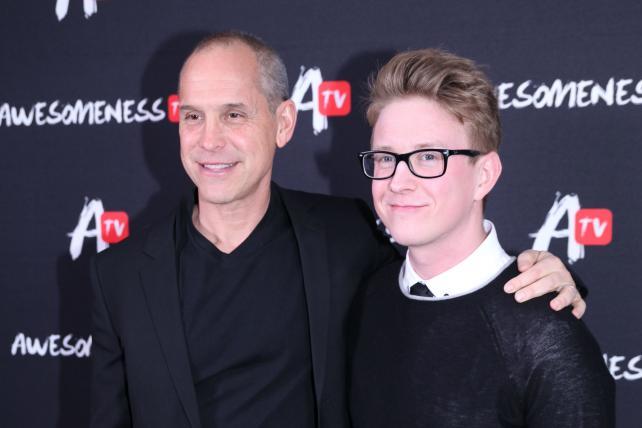 "They are not the same," said AwesomenessTV CEO and co-founder Brian Robbins during the company's first NewFront presentation held at Spring Studios in Tribeca on Wednesday evening.

For one, Mr. Robbins quipped, "Gen Z is loaded." Of course, it is their parents' money they are spending, but as Mr. Robbins points out, anyone with a teenager knows they are the ones making the purchasing decisions.

To reach this up-and-coming consumer, AwesomenessTV, which is owned by DreamWorks Animation, with Hearst and Verizon holding stakes, has evolved from a YouTube channel to an "IP delivered TV network" that produces 800 hours of content a year, which Mr. Robbins said is "probably more than most cable networks."

It's continuing to grow with new series not only for digital platforms like Verizon's go90, but also TV and film.

AwesomenessTV renewed "Royal Crush," it's collaborating with Royal Caribbean International, and "Guidance," and introduced its new psychological thriller for go90, "[email protected]" It is also collaborating with Major League Baseball on a new scripted series "that will give unique access to the game's exciting elements and top athletes through the voice of Gen Z."

The network also announced a partnership with the messenger app Kik for a bot that combines native video and chat to allow fans to chat with AwesomenessTV. And it will soon add character bots for scripted series and films to deliver companion narratives, behind-the-scenes features and alternative endings driven by audience participation.

DreamWorksTV, the kid-focused vertical which launched in 2014, will host its first live event, the Kids' Game Awards, this October. The all-digital show will allow viewers to vote on their favorite video games and will feature special appearances by celebrities, gamers, digital influencers and musical guests.

For advertisers, ATV is partnering with Zefr, a video-data and technology company, on a new program dubbed "Signal," which will better distribute branded content across multiple platforms. And it's working with Brightline to serve interactive ads on connected TVs and over-the-top platforms.

Much to the relief of the marketers in the room, Mr. Robbins said AwesomenessTV will not be making any announcements around virtual reality, unlike nearly every other digital publisher during the eight days of the Digital Content NewFronts.