The NewFronts So Far: Truth, Half-Truths and Truth Fatigue 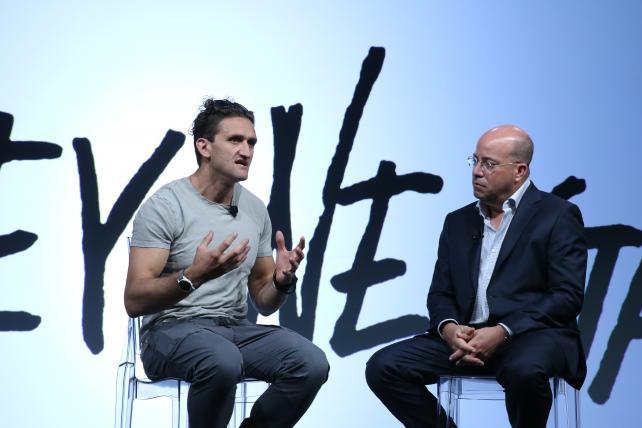 NEWFRONTS FATIGUE SET IN EARLY, after the annual two-week showcase for digital video began with a two-hour pitch to advertisers by The New York Times. The Times paraded out its journalists the way other digital publishers might tout their social influencers as #NewFronts became a trending topic in New York. The behind-the-scenes look at reporters' efforts to get to the truth were fascinating, at first, but by the hour-and-a-half mark truth fatigue had set in: Agency execs and clients began trickling out and the previously packed TimesCenter was half-full by the time they got to their efforts in VR, augmented reality and Snapchat Discover.

A few fun tidbits were gleaned, though. "Chicken" was the No. 1 search term on the site two years ago. When the New York Times partnered with BMW for "The Daily" podcast, it guaranteed the auto maker 750,000 streams. The podcast just hit 27 million downloads, the Times said. (Of course, not every download is played. A spokeswoman declined later to say how many streams it delivered for BMW.) Still, Michael Barbaro, host of "The Daily," said he's "learned to speak like a human." So there's that. -- Jeanine Poggi

TWITTER'S JACK DORSEY, THE CEO IN BLACK JEANS, T-shirt and sneakers, said Twitter will be around for years -- upwards of 10,000, give or take. And he plans to be at the helm till the bitter, bitter end with a cryogenic (or virtual or augmented) assist from Silicon Valley. So, yay, that means 10,000 more NewFronts. Give or take.

Matthew Derella handled much of Twitter's show like it was a live happening, which fit Twitter's "It's What's Happening" motto. Among the things that was happening: a seemingly last-minute announcement that the National Football League had re-upped a content partnership with new live shows (but no actual games). The NFL partnership at least helps Twitter keep some football content after losing the most important part, actual games, to Amazon on Thursdays. -- Garett Sloane

"Thank you for coming here and not the #MetGala. The good news is you can check #Twitter to know what's going on there." @Jack #newfronts pic.twitter.com/ElMCIk43QD

WE GOT GIDDY WHEN TONY AWARD-WINNER Audra McDonald took the stage at Twitter's NewFronts to play "Did you Tweet that?" with the hosts of BuzzFeed's new Twitter show "Morning Feed." Less rivieting was Twitter's announcement of 16 partnerships with various media companies for live streaming video. Do people really want to watch TV on Twitter? A year from now, how many of these shows will still be on air (in stream)? We'll be sure to let you know. -- J.P.

#NEWFRONTS WAS NO LONGER TRENDING on Twitter in New York by Tuesday morning, pushed out by topics such as Jimmy Kimmel's Monday-night monologue about his newborn son's surgery, #MyBankAccountSays and the new Harry Styles song "Sweet Creature." At least #OldFronts wasn't on the list. -- Nat Ives

AT DISNEY'S NEWFRONT, STORMTROOPERS took over. One Disney exec was heard wondering whether there should have been more celebrity talent on stage, but a colleague said Stormtroopers were much better. And kinda topical! The "Star Wars" soldiers were hanging around for photos and drawing lines for an hour after the presentation. -- G.S.

CONDE NAST TOOK ABOUT 30 SECONDS after its opening montage to take advantage of the ongoing mess in digital media. "Fake news, alternatives facts, fraud, non-brand-safe content" haunted chief business officer Jim Norton's talk at Cipriani 25 in downtown Manhattan. "But the challenges facing our industry have inspired and energized us. Conde Nast has always been the place where quality content brand safety and engaged audiences have always been unquestioned." The way it compared its videos' audiences to TV, however, was certainly open to question. -- N.I.

DEFY MEDIA TOOK THE WHOLE SAFTEY THING LITERALLY: Trying to get into its presentation was like going through the security line at the airport. We got to leave our shoes on, at least. Defy Media President Keith Richman eviscerated traditional TV -- flashing a picture of the old, white men who lead some of the biggest networks (heyyy, Les Moonves!) to hammer home their aging audiences. Many of his points were valid. One highlight was a spoof of the many iterations of NBC's "Chicago" franchise, including a pet hospital version. -- J.P.

The #Newfronts are so yesterday! Who needs a NewFront, anyway?! Tee hee. Here's the standing-room scene at @POPSUGAR - all buyers. #iab pic.twitter.com/6o97VVpSnF

SETH ROGEN OPENED HULU'S SHOW in a video talking about the benefits of advertising there. "You only pay for ads that are watched to 100% completion, which sounds gross," Rogen said. Mindy Kaling, whose "The Mindy Project" is entering its final season on Hulu, called for advertisers to buy into the show before it's gone. "There's no content on my show, it's just me talking about brands," she said (joked? We're not sure). "We found it is much more interesting for me to hawk different corporations and wear colorful outfits." -- J.P.

SNAPCHAT MAY INDEED BE THE "IT" PLATFORM for media companies looking to place new shows. Hearst has been a Snapchat Discover partner from the outset, and now has six of its magazines creating for the app. Its Cosmo channel has 11 million subscribers and its Snapchat content as a whole was getting 10 million viewers a day, according to the company. Hearst said during its pitch on Wednesday that it hits 77 million monthly unique visitors on the app in total. Condé Nast, Turner, NBC Universal, Time Inc. and others are also gung ho on the platform. -- G.S.

had so much fun performing #SIMPLE at @refinery29's #newfronts today! 💃🏽🎶💕✨ pic.twitter.com/w5UjjKkcND

TIME INC. HAD A SPONSOR FOR ITS PITCH TO SPONSORS at a packed Hammerstein Ballroom in Manhattan: Breakfast and coffee were courtesy of Dunkin' Donuts. The home to titles including Time, People and InStyle recently said it was no longer considering a potential sale, the publishing giant showed off its presence on platforms like Facebook and Snapchat, and highlighted augmented reality executions on its magazine covers. Time Inc. gave out copies of Sports Illustrated with an AR component developed by Ryot; scanning a code could bring to life a cover featuring a climber on Mount Everest, promoting a virtual reality series in the LifeVR app called "Capturing Everest." A literal tall order. -- G.S.

.@TheDailyShow @Trevornoah : "We are learning about the presidency at the same time as the president" @PeopleNow live @TimeInc #NewFronts pic.twitter.com/GeuZCFbHWS

"THIS LOOKS LIKE A BIG SCIENCE FAIR WITH A FOOD COURT" was perhaps the best description overheard at Turner's NewFronts. The company showcased its CNN, Bleacher Report and Great Big Story brands by taking over a space in the West Village. Upon entering, agency executives and marketers were greeted by massive interactive screens that looked like souped-up versions of CNN's, sigh, Magic Wall. Other elements included a countdown clock to the midterm elections -- only 550 days to go! -- and a replica of the White House press briefings podium.

YouTube star Casey Neistat, whose social news app was purchased by CNN, was on hand to discuss his new daily digital show. (He would also appear at the YouTube "Brandfront" later that night.) He took the stage with CNN President Jeff Zucker in what looked like gym clothes and proceeded to hush the crowd before throwing out the F-bomb. Bro. -- J.P.

Guys, this is a *carpeted escalator*. More innovation at the #newfronts! @turner pic.twitter.com/XZtiHU6PvP

AT YOUTUBE'S 'BRANDCAST,' CEO Susan Wojcicki re-apologized to any brands that found troubling ad placements on the video site. In fact the whole event could be seen as a response to the months of negativity that swirled around the site, going back to the February discovery that its No. 1 star, Felix Kjellberg aka PewDiePie, was posting anti-Semetic jokes. Then brands found their ads on even worse content. To counter the narrative, YouTube held a love-fest. Katy Perry put on a show and Kevin Hart and James Corden brought their comedy. Hart was particularly heart-felt talking on stage about the video service, which has become a force in the comedy world. "YouTube made me," Hart said.

Casey Neistat was the quintessential YouTuber brought on stage to convey the power of the site how it's changing the culture of entertainment. He talked about the community he's built there and the 1.5 billion views his videos have generated. Neistat said he gets stopped on the street by fans saying how he's changed their lives. He ended his presentation with a physics demonstration, pronouncing his hand "old media" and dropping his mic on the floor -- "YouTube." -- Garett Sloane