Now Is the Time to Experiment, but Not Alone
READ THIS NEXT
NBCU looks to deliver brands the scale of traditional TV in streaming, but with a twist 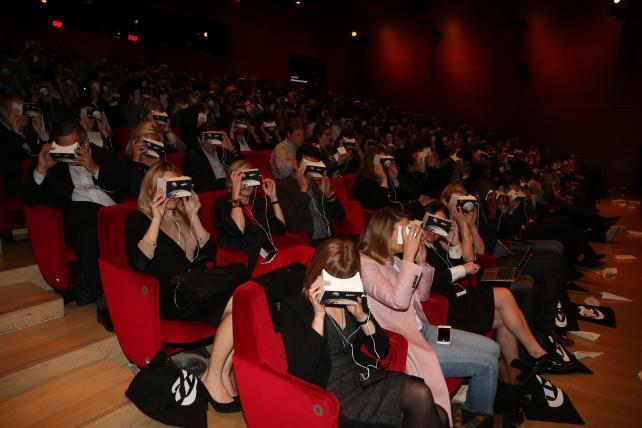 Refinery29 helped kick off the Digital Content NewFronts on May 2 with an announcement that would be echoed one way or another for the following two weeks: In addition to its ambitious plans for standard video, it intends to release one piece of virtual reality or 360-degree video every week for the rest of the year.

Nearly as often as publishers dropped famous names during the NewFronts' two-week run, invoking everyone from Dwayne "The Rock" Johnson to Bethenny Frankel in their sales pitches, they made sure to mention VR.

National Geographic will use its NG VR studio to put viewers on the ground alongside its explorers, photographers and storytellers, executives told ad buyers. VR originals and extensions of its popular media properties will take users "inside the stories" covered in shows like "Explorer" and simulate what it takes to build a home on the Red Planet in anticipation of "Mars."

Hulu is partnering with Live Nation for a VR concert series, CNN's Great Big Story will release a travel and adventure series called "Take Me There," and The Economist will produce new VR films as part of its year-old Films division. Time Inc. is also creating VR content across news, sports, celebrity, fashion, food, finance and travel, among others, as part of its Life VR app set to debut in the fall.

All the plans—and those are just a sample—may seem like overkill for an emerging medium that only a small slice of Americans have even sampled. But these VR and 360-video opportunities do have promise for marketers, according to agency executives.

The next 12 to 18 months will likely "make or break" consumers' adoption of virtual reality, Ms. Fishman predicted. "For marketers, if you are interested in investing in VR, now is the time to do it," she said.

That doesn't mean marketers should go it alone. The NewFronts announcements showed there are many viable partners ready to help marketers explore what works and try to make a splash.

Mr. Anselmo said he is also excited "to begin to understand what commerce potential exists and what that might look like in VR."

Out of all the publishers trying their hand at VR this year, Ms. Fishman said the New York Times is the furthest along. The company made a meaningful investment in the technology last year when it distributed Google Cardboard viewers to subscribers and published several VR videos, including one about children displaced by war and another that went inside the making of the New York Times Magazine's walking tour of New York.

Next up, The New York Times Magazine is creating a VR series tied to its annual Voyage issue. The series, debuting this fall, will send viewers on assignment with the magazine's photographers as they travel around the world. T Magazine will also release the first of its VR films this fall, which will explore the art, design, fashion and entertainment industries.

While most of the VR content thus far has been in the non-fiction category, the NewFronts also introduced some scripted efforts.

StyleHaul, for example, is adapting the young adult sci-fi book "Free to Fall" for a series that includes VR. The book tells the story of a teenage girl, Rory, who lives in a society where every decision is dictated by an app. Each of the 22-minute episodes will include a three-to-five minute 360-degree segment where viewers will be able to follow Rory from a first-person perspective.

"Even without a massive volume of VR devices in consumers' hands, I think it's great producers are thinking beyond the obvious segment of gamers and getting out ahead of it," Mr. Anselmo said.

The big question for marketers is how advertising fits in.

"While you may see some of the standard 'brought to you by' or brand integrations into the VR content, I think the real power is going to be in working to build truly immersive brand experiences," Mr. Anselmo said.