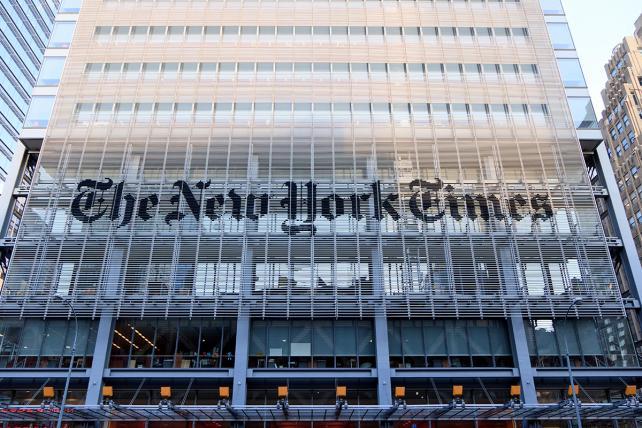 It didn't take long to get NewFronts fatigue. The New York Times kicked off the two weeks of presentations with a more-than-two-hour pitch to agency executives and marketers parading its journalists in the way other digital publishers might show off their social influencers.

Typically one of the more well-attended NewFronts pitches, the event pulled an overflow crowd to the TimesCenter at 9 a.m. on Monday as Madison Avenue lined up to hear from the Times during what has been perhaps one of the most high-profile years in the news organization's recent history thanks to President Trump. By the two-hour mark, the audience was trickling out early, however, tired of hearing about how Times journalists go about seeking the truth.

While the company touched on a variety of innovations such as its new Snapchat channel, VR initiatives, a Spotify partnership and the ability to use augmented reality to turn print into a more interactive experience, the focus was really on introducing the audience to its journalists and editors and pulling back the curtain on some of its biggest investigative reports.

The Times was strategic in making sure ad executives and the press didn't pigeonhole its initiatives into one theme. If the company's big push last year was virtual reality, in closing out the presentation, Sebastian Tomich, senior VP-advertising and innovation for the Times, said this year "we are going all-in on the ideas business."

One focus, on audio, still came through. The presentation opened with a live broadcast of the Times's newish podcast "The Daily," which has 27 million downloads, far surpassing the 750,000 the Times originally guaranteed to its sponsor BMW, said Meredith Kopit Levien, exec VP-chief revenue officer at the Times.

The Times is thinking about its "sound" and will be looking to do some more ambitious storytelling in the vein of "S-Town" or "Serial" but "with the Times journalism behind it," said Michael Barbaro, host of "The Daily."

The New York Times saw its print ad revenue decline 16% in 2016, leading to a 9% drop in total ad revenue. But on the digital side, ad revenue rose 6% to $209 million as the Times added 514,000 digital-only subscriptions during the year.