Anheuser-Busch InBev will use up to two of its Super Bowl ads to plug Budweiser Black Crown , the brewer's latest higher-alcohol line extension, which is slated to reach stores on Jan. 21. 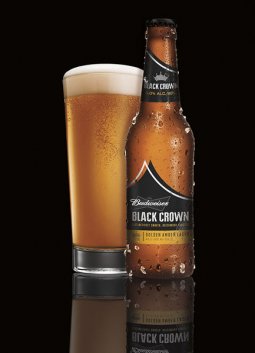 The brand's agency is Anomaly , which also handles the flagship Budweiser brand. A-B InBev, which has the exclusive beer advertising rights for the Super Bowl, is still mulling over the rest of its Super Bowl lineup and has not commented further on the process. Ad Age has learned that another new high-alcohol line extension, called Beck's Sapphire, is in strong contention for a spot, along with the usual ads for Bud Light and regular Budweiser. Bud Light's agency is Translation. Black Crown is assured of one 30-second ad, but could get two.

Like Platinum, Black Crown is 6% alcohol by volume, which puts it a full point above regular Budweiser's 5% ABV. The brew was originally conceived as part of "Project 12," in which brewmasters at 12 A-B InBev breweries created their own small-batch "tribute" beers, each with a distinct style. Black Crown is described as having more "body, color and hop character" than regular Bud. The campaign will include outdoor, digital, radio, print and social media, including executions on Facebook and Twitter, where the brewer will feature the hashtag #TASTEIS.

Beck's Sapphire is a line extension of Beck's that is brewed with "German Saphir aroma hops." The 6% ABV brew, which comes in a black bottle, made its debut on New Year's Eve. The global agency for Beck's is Mother .

The line extensions are partly aimed at winning over millennial drinkers who have increasingly switched to spirits brands, especially for nighttime drinking occasions. The new higher-priced beers also come as A-B InBev and other brewers seek to recapture some momentum from smaller craft beer brands, which in many cases have higher alcohol content than mainstream light beers.