READ THIS NEXT
A look back at Coke and Pepsi Super Bowl hits, from 'Hilltop' to 'Chimps' 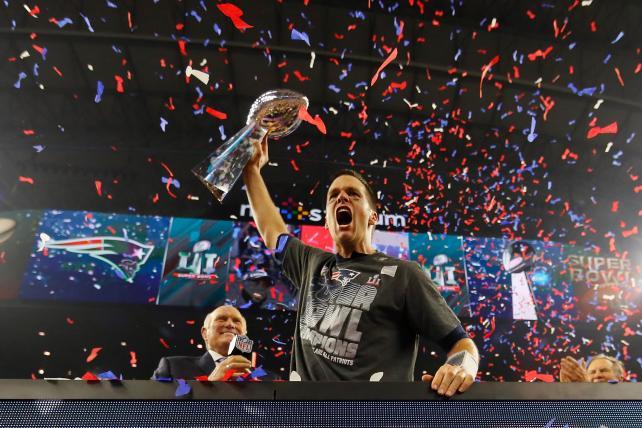 It was a game that largely confounded expectations, a dazzling, dizzying spectacle that served as a microcosm of sorts for the entire NFL season while upending a half-century of precedent. Tom Brady and his infuriatingly consistent New England Patriots on Sunday night put together the single greatest comeback in Super Bowl history, and in so doing made a complete hash of the record books. That it took a few minutes of overtime for the Pats to secure their victory was simply the icing on a very rich cake for Fox.

Brady's two-point conversion pass to wideout Danny Amendola knotted the score at 28-all with just a minute left in regulation, and Atlanta's subsequent failure to advance the ball out of its own territory sent the Super Bowl into overtime for the first time in 51 years. Because ad sales are about managing contingencies, Fox had pre-sold a number of bonus spots on the odd chance that Super Bowl LI would require a little temporal wiggle room, and as that prospect became a reality, other brands began making inquiries of their own.

"We always have overtime agreements in place, and did so this year," Fox Networks Group Exec VP-Ad Sales Bruce Lefkowitz told Advertising Age a few hours after the game had wrapped. "We were also garnering commitments in real time. We would have liked the greatest Super Bowl in history to go on forever, and were prepared if it did."

Because it only took the Pats nine plays to find the end zone, Fox only had the chance to air four ads in overtime. In a pod that aired between the coin toss and Matt Bosher's kickoff, the network reprised the Hulu spot for "The Handmaid's Tale" that first ran in the second quarter and then followed that trailer with the Sprint commercial about the dad who fakes his own death via vehicular freefall in order to get out of his Verizon contract. Like the Hulu teaser, the Sprint spot also first appeared during the second quarter.

Two original ads closed out the overtime pod; Olivia Munn appeared in a 60-second spot for Proactiv, and the student loan refinancing company SoFi bought a 30-second sliver of airtime. According to Nielsen preliminary metered market data, the four OT spots aired as 74% of all TVs in use were tuned to Fox.

All told, Fox's OT pod sprinkled between $16 million and $20 million in additional cash on top of what was already a $400 million-plus night. (According to Comcast, at an average rate of $4.5 million per 30-second spot, NBC in 2015 booked $376 million in Super Bowl XLIX ad revenue. CBS, which did not break out its financials for Super Bowl 50, took in around $4.8 million per spot a year ago, while Fox's going rate for last night's showcase hovered around $5 million per :30.)

Final live-plus-same-day ratings for Super Bowl LI will be released later this afternoon. Given the unprecedented nature of the Patriots' victory and the beefed-up preliminary deliveries, it's expected that Fox will top the ratings record NBC set two years ago, when New England's unlikely win over Seattle averaged 114.4 million viewers.

Fox of late has had extraordinary luck with its top-tier sports franchises. In October, the Chicago Cubs emerged from a 108-year wallow in the doldrums as they rallied from a three-games-to-one deficit to beat the Cleveland Indians in the World Series. The Cubbies' extra-innings victory in Game 7 delivered 40 million viewers, making it the most-watched baseball game in 25 years. According to iSpot.tv estimates, the deciding game alone generated nearly $50 million in ad revenue.

While Fox won't host another Super Bowl until 2020, the network has another monster sporting event in its sights as it begins to prep for its very first production of the FIFA World Cup. The international soccer tournament is scheduled to take place in Russia from June 14 to July 15, 2018.