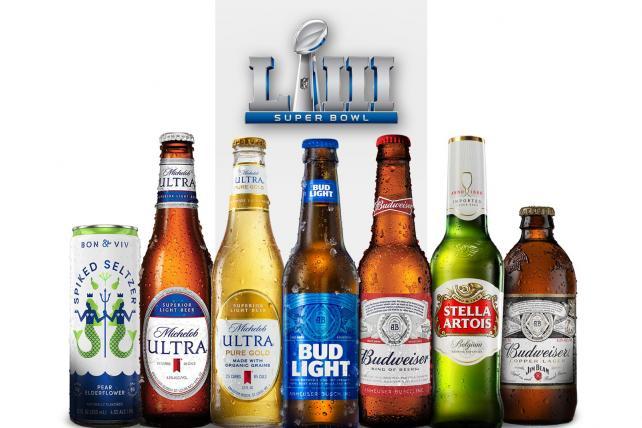 Even if viewers aren't downing brewskies during the Super Bowl, beer will be hard to avoid. Anheuser-Busch InBev will flood the Big Game with eight ads, totalling five-and-a-half minutes, as it uses the largest TV event of the year to try and lift its biggest brands, and the beer category in general, from a prolonged slump.

The ad buy amounts to the brewer's biggest bet on the game in recent memory. AB InBev consumed three-and-a-half minutes in each of the past three Super Bowls. This year, the company will spread its air time across five brands: Budweiser, Bud Light, Michelob Ultra, Stella Artois and Bon & Viv SpikedSeltzer, a flavored malt beverage brand that is being repositioned with fewer calories and no sugar.

The investment comes as the nation's largest beer brands, which have long been in decline, experience worsening trends while the liquor industry continues to grow. Bud Light and Budweiser, AB InBev's two largest brands, fell by 6.6 percent and 6.1 percent respectively in the year-period ending Dec. 29, according to Nielsen data cited by Beer Marketer's Insights.

"We want to elevate beer, that's our North Star for everything we're going to do in the Super Bowl," says Marcel Marcondes, AB InBev's U.S. chief marketing officer. The brewer, which has exclusive alcohol advertising rights in the game, is going big this year because the Super Bowl is "one of the few moments when [people] are really watching TV," he says.

Marcondes did not reveal creative themes for the ads but said the brewer would avoid anything political. Budweiser in 2017 drew headlines for an ad that focused on Bud's immigrant roots at a time when the immigration debate gained steam with the arrival of Donald Trump in the White House. Trump, of course, has added fire to the debate as he makes a Mexican border wall a condition of ending the government shutdown. The situation opens the door for brands to take a stand on the hot-button issue once again, but Bud doesn't want to touch it.

"I would never chase a political approach because of the buzz. When we did it a couple years back it was not intentional, but we did it because it was authentic," Marcondes says of the ad, which traced Adolphus Busch's arduous journey to America from Germany. "It was the story of our founder. We did not do it because of the debate."

This year, Budweiser will dedicate one of its ads to its Copper Lager variety, a limited-edition beer launched last year that is co-branded with the Jim Beam name and aged on bourbon barrel staves, which are the wood pieces that make up bourbon barrels. The ad will be handled by VaynerMedia. The other Bud spot is by David. Bud's Clydesdales will make an appearance in one of the ads, Marcondes confirms.

Wieden & Kennedy will handle two spots for Bud Light. When pressed about the brand continuing its medieval-themed "Dilly Dilly" campaign, Marcondes would only say that "even if we have something coming from the medieval world, things will be different."

FCB Chicago will handle two spots for Michelob Ultra, including one for the brand's Pure Gold line extension that debuted last year. It contains 85 calories, 10 less than regular Ultra, and is marketed as having "organic grains." Ultra remains a star in the brewer's portfolio, with sales volume up more than 14 percent in the year ending Dec. 29, according to the Nielsen figures cited by Beer Marketer's.

Stella Artois will get one ad by Mother. The brand, long a growth engine, has slipped and was down slightly last year, according to Beer Marketer's.

The ad for Bon & Viv SpikedSeltzer is being handled by Bullish, which has led the brand's advertising since 2017. The ad marks the first time a flavored malt beverage has been advertised during the Super Bowl. The National Football League had prohibited flavored malt beverages from being advertised during its games but began allowing it in 2017 as part of the same ad code update that permitted in-game liquor advertising for the first time.

While liquor brands can theoretically now advertise in the Super Bowl it is practically impossible since AB InBev, which does not market spirits brands, has alcohol category exclusivity. But Jim Beam will get some notice because it's part of Bud Copper Lager's branding. Still, Marcondes stresses that "it's going to be a Budweiser ad."