What Anheuser-Busch Has Planned for the Super Bowl

How much are spirits marketers getting under the skin of big beer brands? So much that the nation's largest brewer is using a major chunk of its expensive Super Bowl ad time to fight back.

Anheuser-Busch, the game's exclusive beer advertiser, is dedicating the first two of its six Super Bowl ads to Bud Light Platinum, a new higher alcohol line extension aimed at younger, urban drinkers who have abandoned beer for spirits. The two 30-second spots, which will air in the first quarter, eschew the usual slapstick humor Bud Light is known for in favor of a more serious and stylish tone while touting "triple-filtered, smooth finish, top-shelf taste."

The ads are the debut work for AB by Translation, which won the Platinum account in December. If the phrase "top shelf" seems more descriptive of a premium spirits brand, well, that seems to be the point. "We're going after the consumers who have switched to hard liquor," VP-Marketing Paul Chibe said bluntly. With Platinum, "we feel like we can come up with compelling propositions that can compete on image and that can compete on taste and have these people come back to beer and stay in beer." 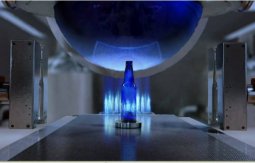 The rest of AB's Super Bowl lineup looks a bit more familiar but still has the marks of an upscale approach that Mr. Chibe, who joined the brewer last summer, seems to favor. Regular Bud Light will get two ads: one 60-second spot by the brand's new lead agency, McGarryBowen, and a 30-second ad by longtime roster shop Cannonball. Budweiser, meantime, will be plugged with two 60-second ads by brand agency Anomaly that include references to the post-Prohibition era.

Those looking for a new look and feel for Bud Light under McGarryBowen will have to wait. The agency's lone ad, which will run in the fourth quarter, keeps the usual "Here We Go" tagline. The spot features a scrawny rescue dog named "Weego" who responds to his name being called -- "Here Weego" -- by fetching Bud Lights from the fridge. McGarryBowen has been on the account only since December. As such, the Super Bowl ad and a longer-term strategy shift for the brand were kept separate, Mr. Chibe said.

Even so, the ad carries clues about the brand's creative direction under Mr. Chibe and his new agency. For one, it does not make drinkers the butt of the joke, as some previous Bud Light ads have done. "The consumer is along for the humor. It isn't the person being made fun of ," Mr. Chibe said. "We want to have a relationship with [consumers]. We want to respect [their] intelligence and elevate the category, not constantly bring it down."

The second Bud Light ad will air right before halftime. It will instruct viewers to use song-identifying app Shazam later in the game broadcast to download a song. AB declined to name the song or artist, other than to say the ad will have "star power."

The Budweiser ads, meanwhile, make an emotional appeal with nostalgia. The first one, airing in the second quarter, recalls the end of Prohibition. Townspeople cheer the end of dry times as the iconic Budweiser Clydesdales -- a Super Bowl staple -- charge in to deliver the first cases of beer. The second spot, in the third quarter, begins where that tale ends and marches through history, with people enjoying Buds along the way. Scenes include the end of World War II, the moon landing and the 1980 Team USA Olympic hockey victory. Mr. Chibe said the spots are meant to portray optimism. "There been tough times and America has gotten through it. We're in a tough time now [but] Bud is [an] optimist about America."

These are also tough times for AB, which like all big brewers continues to lose share as jobless blue collar drinkers spend less and younger drinkers gravitate to spirits. Platinum is squarely aimed at what Mr. Chibe called "urban, well-educated sophisticated" consumers. One of the Super Bowl spots shows the brand being concocted in a new-age looking factory, while the other one features young professionals enjoying Platinum at the office, post work hours. The brew, which will roll out nationally on Jan. 30, has 6% alcohol by volume compared with 4.2% ABV for regular Bud Light. The line extension is an unorthodox play in the light beer category, where brands have traditionally been pushed for their refreshment and "sessionability" -- the idea that you can down more than a few and not be stumbling drunk.

The rollout comes as the brewer continues to experience turnover in its executive ranks under owner InBev of Belgium, which acquired AB three years ago, renaming the global company Anheuser-Busch InBev. The latest departure came just days ago, when the company's U.S. president and longtime employee, Dave Peacock, resigned. His duties were absorbed by Luiz Edmund, North American zone president. The changes could mean more power for Mr. Chibe, who was named to a special North American zone management committee.