Animal Planet and IntoNow Give 'Puppy Bowl' the Second-Screen Treatment

CBS is letting people who watch the Super Bowl on digital platforms this year choose camera angles and try out social-media features. Now Animal Planet's "Puppy Bowl" is getting the second-screen treatment as well. 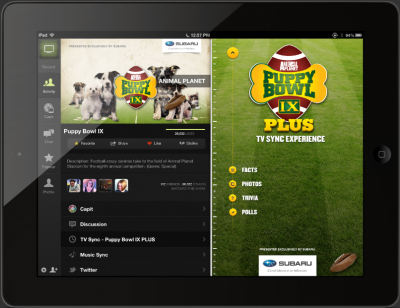 Animal Planet has teamed up with IntoNow, Yahoo's TV app, to offer a "Puppy Bowl Plus" that lets viewers see additional cute photos of "Puppy Bowl" participants running with stuffed footballs, take quizzes, access video extras and visit a "Hall of Fame." The experience will sync with "Puppy Bowl" as it proceeds on TV and allow fans to interact with each other. Subaru is the sponsor of the second-screen experience.

A 12-hour "Puppy Bowl" marathon on Super Bowl Sunday last year drew 8.7 million TV viewers, down 5% from 2011 but still impressive counterprogramming to the most popular TV broadcast of the year. "Puppy Bowl" has also been providing a growing boost for Animal Planet's digital and social efforts. AnimalPlanet.com attracted 5.5 million page views and 1.4 million video streams during last year's "Puppy Bowl," a high mark for the site.

Subaru, which was a sponsor of last year's "Puppy Bowl," is heavily integrated into the traditional and digital platforms this year, with interactive video ads that run across both screens.

This year's "Puppy Bowl" will begin on Feb. 3 at 3 p.m. New elements include hedgehog "cheerleaders."