Bud Light is trying to put laughs back in its advertising. And the nation's largest brew is relying on Amy Schumer and Seth Rogen to get the job done. The two comedians will star in a new campaign for the brew called "Bud Light Party" that has a political theme and will run during the Super Bowl. 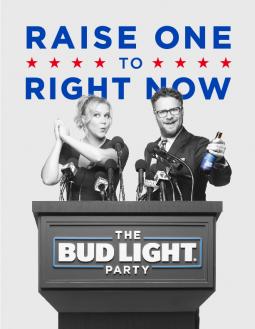 The campaign, which will rely heavily on celebrities, is timed to election season and will run through November. A new tagline, "Raise One to Right Now," will be featured in the spots and live on even after "Bud Light Party" concludes. The campaign marks the debut effort for Bud Light by Wieden & Kennedy, New York and comes as the brewer's most important U.S. brand seeks to reverse a sales slump.

Bud Light does not plan to take any political stands, despite its signature blue color. Rather, the brand is trying to inject more fun and comedy into its marketing by giving a light-hearted take on cultural moments. "We are not going to give commentary on a political stance -- absolutely not. We are just going to remind people to come together, to enjoy life, to have fun," said Bud Light brand VP Alexander Lambrecht.

He described the humor in the ads as "quirky and witty humor that is still easy to be understood by a large percentage of the population." The brand chose Ms. Schumer because "we like her down-to-earthness. We like the fact that she is real," he added.

A teaser released today (above) shows Ms. Schumer and Mr. Rogen preparing to take the stage for a political rally, as they pull on Spanx and apply lotion. The teaser will run on TV during this weekend's NFL games. A 60-second Super Bowl ad will feature the two comedians leading a political rally and inviting people to join the "Bud Light Party," which is meant to evoke the dual image of a political party and a festive party. Actor Michael Pena will also appear in the ad, according to the brand. More celebrities, such as UFC fighter Ronda Rousey, are expected to join the campaign in the second half of the year.

The new Bud Light campaign comes at a critical time for the brand. The brew is by far the largest beer brand in the U.S., controlling more than 17% of the beer market. But Bud Light's sales to retailers fell by "low single digits" in the third quarter in the U.S., A-B InBev reported, as the brand lost 0.45 share points, bringing its total share loss for the first nine months of last year to 0.35 points.

Executives began hyping the new campaign last year, with CEO Carlos Brito describing it as "revolutionary" on an earnings call in October.

"Raise One to Right Now" replaces the two-year-old "The Perfect Beer for Whatever Happens" campaign that was launched under BBDO and positioned Bud Light for spontaneous fun and included such stunts as branded town takeovers. A-B InBev U.S. Marketing VP Jorn Socquet inherited the campaign from former marketing VP Paul Chibe. In an interview last year, Mr. Socquet critiqued "Whatever" for trying too hard to appeal to young adult drinkers.

"Up for Whatever" was also mostly devoid of humor. Instead, ads often showed larger-than-life experiences, like one spot that showed a man running through a life-sized Pac-Man maze. The Pac-Man ad debuted during last year's Super Bowl under Mr. Socquet's watch.

"We are going back to where we used to be the best: Humor is a big statement for the brand again," Mr. Socquet said Thursday during a presentation to reporters in New York. In an interview, Mr. Lambrecht said that humor is what "made Bud Light a cultural icon over the decades, whether it was Spuds MacKenzie or 'Real Men of Genius,' " referring to two popular campaigns.

"Our message is going to be intended for everyone," he added. "It's not going to be tailored for any specific age demographic. We are a brand that stands for the young and the young at heart."

The brewer on Friday also released a teaser for Shock Top's Super Bowl ad, which will feature actor/comedian T.J. Miller: