"This is a great example of the power of PepsiCo's food and beverage portfolio coming to life for consumers on one of the world's largest stages," PepsiCo North America CEO Al Carey said in a statement. The company has long-touted the "power of one" to investors as it justified keeping beverage brands and snack brands under the same roof.

Ad Age had earlier confirmed that Doritos would return to the game after sitting out last year. Its crowd-sourced "Crash the Super Bowl" program ended a 10-year run in 2016.

The Dew spot will be the brand's first Super Bowl outing since its strange but attention-getting "Puppymonkeybaby" ran in 2016. PepsiCo earlier announced that it will run a 30-second spot for its flagship Pepsi-Cola brand that will include a cast of current and former brand endorsers, including Cindy Crawford. 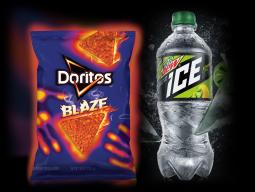 The Super Bowl investment comes as PepsiCo tries to jumpstart its big beverage brands, which have faced sales headwinds of late. In a recent note to investors, Wells Fargo said PepsiCo's carbonated soft drink sales "continue to underperform" with dollar sales down 5.2% in the four-week period ending Dec. 30, according to Nielsen data. Coca-Cola's soda sales grew 1.5 percent in that period.

On an earnings call late last year, PepsiCo CEO Indra Nooyi foreshadowed more spending on the company's bigger brands when she conceded that the marketer last summer had dedicated too much media spending and shelf space to low-calorie, smaller brands and not enough to Pepsi and Mtn Dew.

PepsiCo in a press release Wednesday said its Dew Ice and Doritos Blaze Super Bowl ads would make "advertising history" as the "first time one company has advertised two of its trademarks back-to-back in one nationally televised Super Bowl commercial." Putting two brands in one Super Bowl ad is not unprecedented, however: Diamond Foods touted its Pop-Secret popcorn and Emerald Nuts in the same 30-second ad in 2010.

Although sibling brands have appeared in one Super bowl ad before, a PepsiCo spokeswoman says, PepsiCo's approach is unique because it comprises Dew and Doritos spots run "back-to-back for a total :60 second spot."

"Theoretically, this would give us the flexibility to air these as separate :30s down the road," she adds.