What Is Fiat Chrysler Up to for the Super Bowl? | Ad Age
Skip to main content

What Is Fiat Chrysler Up to for the Super Bowl?

Fiat Chrysler Automobiles will run three ads in this year's Super Bowl, the automaker announced today. Spots will run in the second, third and fourth quarters.

The automaker declined to confirm the total amount of time it has secured or which brands it will plug. An FCA spokeswoman also declined to say which ad agencies it is using.

But given the automaker's 2017 business strategy, it seems likely that its Alfa Romeo brand could get most -- if not all -- of the attention. FCA has outlined plans to pour money into relaunching and growing the niche Italian brand, and the Super Bowl would be a logical place to begin promoting it to a mass audience.

Of course, FCA global Chief Marketing Officer Olivier Francois is known for holding FCA's Super Bowl plans close to the vest, so anything is possible. Unlike most other Super Bowl advertisers, FCA typically does not release its ads before the game. FCA also typically picks ads from its roster of agencies using a jump-ball approach.

DDB Chicago had been the lead agency for Alfa for a brief stint, but that ended in September when FCA confirmed that the shop was no longer the agency-of-record and that "the Alfa Romeo brand is working with FCA's roster of agencies." FCA at the time stated that DDB would still work on Jeep. FCA's roster agencies also include Richards Group; Doner; FCB, Chicago; and GSD&M. Goodby Silverstein & Partners won the Chrysler brand creative account in December, replacing Wieden & Kennedy. 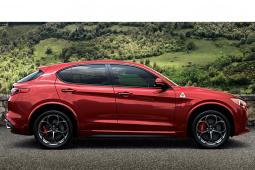 The new Alfa lineup includes the Giulia sedan and a crossover called the Stelvio, the first SUV in Alfa's history that debuted late last year at the Los Angeles auto show.

As Automotive News recently reported, Alfa's relaunch has cost the automaker more than $2.7 billion so far, according to estimates from FCA CEO Sergio Marchionne. The relaunch has been marked by delays. The automaker in 2014 outlined aggressive plans for Alfa, but in 2016 FCA restated its goals and extended the five-year plan by two years to 2020, according to Automotive News.

For last year's game FCA dedicated two minutes to its then-thriving Jeep brand. One spot, "Portraits" by Cheil Worldwide's Iris New York, celebrated the brand's 75th anniversary by using 60 images from around the world that showed famous people with ties to Jeep, such as Marilyn Monroe, Jeff Goldblum and BB King. The other ad by DDB Chicago was backed by a song sung by Morgan Dorr and showed scenes of Jeep activities.

Jeep sales have slumped of late, falling by 6.9% in January for its fifth consecutive monthly decline, Automotive News reported. The only core FCA brand to record an increase was Ram.

Alfa remains a niche brand in advance of the coming new investment. Monthly year-over-year sales in the U.S. increased from 68 to 108 vehicles in January, according to data compiled by Automotive News. For all of 2016, 516 Alfa Romeos were sold in the U.S.