Fox's speedy Super Bowl sellout slams the door on a few slowpoke brands
READ THIS NEXT
DoorDash is the latest first-time Super Bowl ad buyer, and it's bringing Cookie Monster 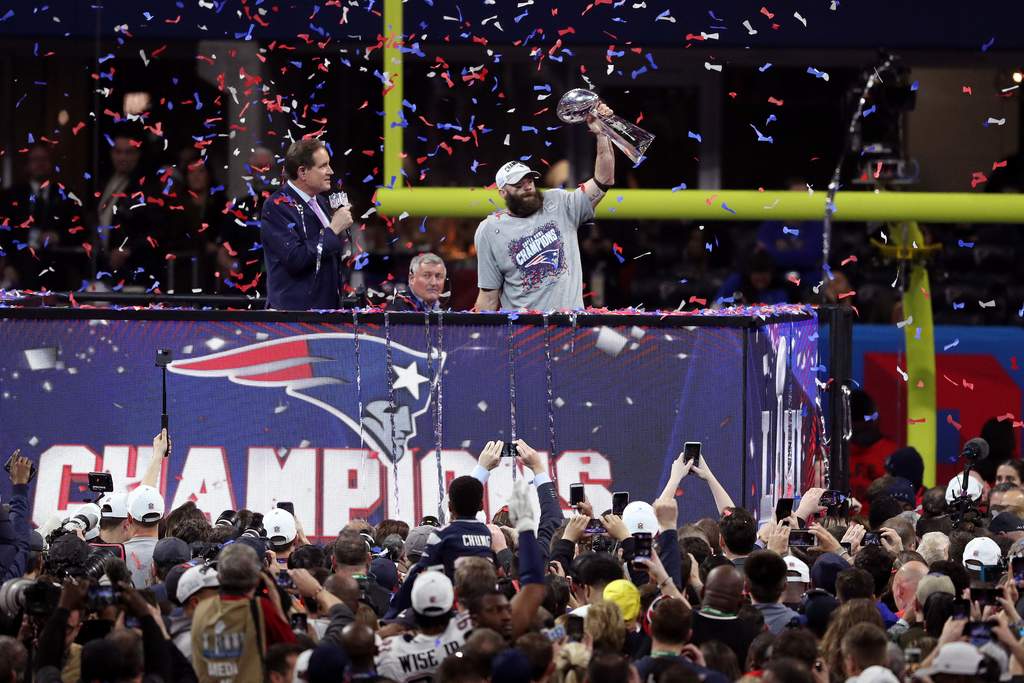 Sold out: Julian Edelman of the New England Patriots hoists the Vince Lombardi Trophy after Super Bowl LIII in Atlanta.

If you’re a marketer who had been taking a wait-and-see approach to snapping up an in-game ad unit in Fox’s upcoming broadcast of Super Bowl LIV, you’re pretty much out of luck. After network honcho Seth Winter spent the better part of the last few weeks warning would-be clients that the last of the Big Game inventory was about to run out, the executive VP of sales for Fox Sports sold the last available spot on Friday.

Not a single commercial unit is being held back for the stragglers who may have been iffy on their creative or were simply hoping to hold out for a better price. The early bird has a belly full of worm meat. Better luck next year.

Pricing for Fox’s Super Bowl LIV units topped out at $5.6 million per 30-second spot, a high watermark for the broadcast.

Winter says that he and his team were diligent about keeping advertisers abreast of Fox’s rapidly dwindling in-game commercial inventory. “Because we didn’t want anyone to get caught out, we over-communicated to the marketplace that this was going at a pace we’d never seen before,” he says. “We’d spent weeks imploring them: ‘We are serious! We are going to sell out!’”

Winter says this year’s sellout moved faster than his previous deck-clearing efforts at NBC. In recent memory, the speediest sales push was engineered by Fox in 2010, when the network signed off on its last in-game unit in Super Bowl XLV three days before Halloween. That effort was fueled by the post-recession recovery and the fact that NFL ratings were at a record high at the time.

That some marketers may have decided to try their luck despite Winter’s warnings is a function of how poky the Super Bowl market has been over the last five years. Earlier this year, CBS put a bow on its Super Bowl LIII sales about five hours before the opening kickoff, cutting it a bit closer than NBC did in February 2018, when it announced that it was sold out about 48 hours before the Patriots and Eagles squared off in Minneapolis.

The last time Fox hosted the NFL title tilt, two years ago, the ad sales squad still had two or three units left to sell with five days on the clock. In keeping with the common practice of holding back a spot or two for that procrastinating movie studio or snack brand willing to pay through the nose for the privilege of booking a zero-hour ticket for Super Sunday, Fox didn’t ever get around to pinpointing exactly when the final avail had been secured in 2017.

Winter says the fact that the in-game ad units in the 2020 Super Bowl have been picked clean before Thanksgiving is largely a testament to the strength of the national economy. Also going a long way toward boosting demand is the NFL’s compelling ratings narrative; through Week 11 of the regular-season schedule, the league’s TV windows are up 6 percent year-over-year with an average draw of 16 million viewers and a 9.3 household rating.

Fox’s contribution to the NFL ratings boom is notable inasmuch as the network’s “America’s Game of the Week” broadcast is once again the tube’s biggest draw. The network’s nationally televised Sunday afternoon package is currently averaging 23.6 million viewers and a 13.4 rating, up 10 percent and 8 percent, respectively, compared to 21.5 million and 12.4 in the analogous period in 2018. (Note that these ratings do not include the deliveries for yesterday’s rainy Cowboys-Patriots showdown, which is expected to serve up the biggest TV audience of the regular season.)

There isn’t a soft spot on Fox’s NFL TV roster; per Nielsen, the network’s “Thursday Night Football” deliveries have improved 9 percent versus the year-ago numbers, and its regional NFL coverage is at present up 7 percent.

Fox’s first public assessment of the state of its Super Bowl sales was issued on Nov. 5, when Fox Corp. Executive Chairman and CEO Lachlan Murdoch told investors that all of the in-game “A” positions had been booked—industry argot for the first spots to air out of an ad break. The network’s move to reduce the number of commercial breaks from five to four per quarter had the desired effect, limiting the availability of these highly-coveted opportunities in a market that was crowded with potential buyers.

Two weeks ago, Fox was believed to be 80 percent sold out, with the third quarter of the broadcast fully accounted for. Winter says the last handful of units moved quickly, so much so that some advertisers who’d been contemplating bumping up from a 60-second buy to a 90-second spot had to stick to their original game plan.

Winter wouldn’t identify which brand had snapped up the very last in-game unit, nor would he comment on whether a certain high-profile political campaign had managed to get in under the wire. As Sports Business Daily’s John Ourand reported last week, the people in charge of President Donald Trump’s re-election efforts had “agreed on the broad terms for buying an ad” in the Big Game, which is set to air on the eve of the Iowa caucuses.

For advertisers who sat on their hands during crunch time, Winter says there will be no last-second Hail Mary pass.

“I’ve had to admonish people to reorientate themselves to pre-game and post-gun [spots],” Winter says. “You’re not going to get that 45 rating on either end of the game, but you’re still looking at a 25, which, as you know, is not too shabby, especially in today’s environment.”

Another place to revel in the spoils of a 25 household rating is in the NFC Championship Game, which is slated to kick off on Sunday, Jan. 19 at 6:40 p.m. EST.  Winter says inventory in the final playoff game before the Super Bowl is moving fast.