There's a lot of agreement that central Indiana -- with its flat terrain and chilly temps -- isn't exactly the most exciting locale for the country's biggest sporting event. But there's at least one thing Lucas Oil Stadium in Indianapolis can boast that no other host has been able to in the past: the very first USDA organic-certified dish to ever be served at a Super Bowl.

At a time when more and more Americans are searching for healthy and sustainable food options, Centerplate, the NFL's largest food beverage and hospitality provider, decided it was time to expand the array of game-day snacks available to patrons beyond the typical fatty and fried-food fare. 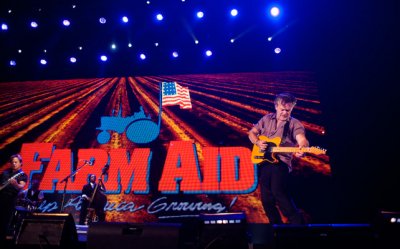 Right after the New Year, the company began looking for a partner that could help it provide more of a healthful, but still heartland-style food experience. What Centerplate found was Farm Aid, the organization started by American rockers John Mellencamp, Willie Nelson and Neil Young to help raise money for family-owned farms in the U.S.

It's a particularly apt pairing considering Mr. Mellencamp famously sang about being born in a small town in Indiana and still lives in the state. He's agreed to serve as the face of Centerplate's "Homegrown"-branded concessions, and as the spokesperson, will be on all the media materials in the stadium. 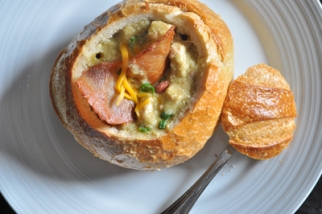 As a result, fans at Lucas Oil Stadium on Sunday will, in addition to the typical hot dogs and popcorn, have their choice of hormone- and antibiotic-free red beef chili and green pork chili. It will also sell a white bean chili, which is the first organic-certified concession to appear at the Super Bowl.

All three styles of chili will be made using locally-sourced ingredients from family-owned farms. The vegetarian chili will use onions, celery, garlic, carrots, peppers and oil that are also all organic. For every bowl of chili sold, Centerplate has committed to making a $2 donation to Farm Aid.

Asked why Centerplate chose to go with chili for its first organic dish at the big game, Bob Pascal, the CMO of Centerplate, told Ad Age it's because "chili is a tailgate favorite" and is still a stadium-acceptable snack vs., say, a salad or some other item that doesn't feel quite so festive. The choice of chili also permitted the use of various family farm-grown ingredients.

"As we think about the fan experience, the food and beverage is such a significant piece of the game-day enjoyment," said Mr. Pascal, noting that aside from what's happening on the field, the concessions represent one of the biggest memories for fans at the Super Bowl. In addition to its work with the NFL, Centerplate is a major food provider for professional baseball, and regularly hosts marquee events. This will be the company's 12th Super Bowl. It has also done 20 World Series, 15 official U.S. Presidential Inaugural Balls, and more than 100 major College Bowl Games.

"Having a Superbowl in Indiana is special and there's such as sense of pride in Indiana to be hosting."