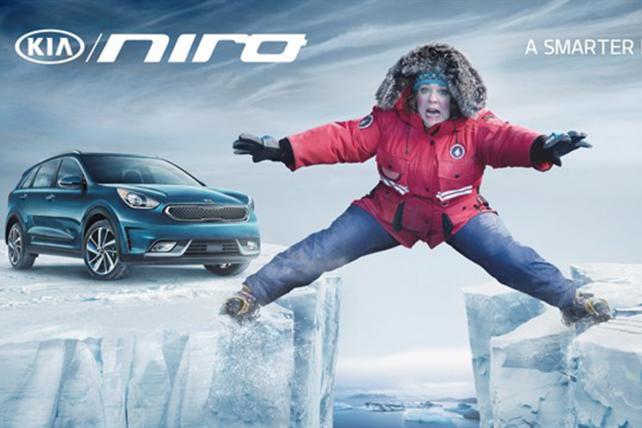 Kia is calling on a chat bot to debut its ad as the automaker drives into new terrain for Super Bowl ad pre-releases. The automaker announced today that its so-called NiroBot will unveil the ad on Wednesday that features comedic actress Melissa McCarthy and the new Niro crossover.

The bot was created late last year for Facebook's Messenger platform as a way for consumers to get information and have questions answered in real time. As Automotive News reported in January, the bot is supported by Kia representatives who can enter the conversation if a shopper asks to speak with a person.

Kia stated today that the NiroBot has garnered more than half a million engagements since it was launched in November. The bot, which was developed by Interpublic Group's Ansible, includes "guided vehicle discovery, expansive technical knowledge, step-by-step tutorials and test-drive scheduling," according to Kia.

By releasing the Super Bowl ad with a bot, Kia is seeking to bolster the image of the Niro as a tech-friendly vehicle. There is, of course, a PR component, too, as marketers continue to seek new ways to hype their pricey Super Bowl spots to gain notice beyond game day.

"With its advanced technology and tremendous efficiency, the Niro sets a new standard in the market, and being the first bot for Messenger to debut a Super Bowl ad reinforces the idea that our newest crossover is like nothing consumers have ever seen before," Michael Sprague, chief operating officer and exc VP for Kia Motors America, said in a statement.

Kia's 60-second Super Bowl ad is by David & Goliath and will trace "a heroic and harrowing journey stretching from the polar ice caps to an arid desert," Kia stated on Jan 23, as it released the following teaser: