Is Madonna the Worst Choice Ever for a Super Bowl Halftime Show? | Ad Age
Skip to main content
Sign In Register

Is Madonna the Worst Choice Ever for a Super Bowl Halftime Show?

Madonna is on the cover of the New York Post today for having done a Victor Cruz-style salsa victory dance at a press conference yesterday. You'll be forgiven if you suspect that the Material Girl was merely engaging in a last-minute attempt to associate herself somehow with something football-ish as her Super Bowl halftime show approaches. Madonna said that in addition to intense rehearsals, she'd be relying on "the support of the universe and the grace of God" to pull off her performance.

The support of the universe? I guess the universe doesn't include football fans, who have been grumbling in social media about Madonna since the announcement of her halftime gig was first made in December. And it didn't help Madonna's cause that there was also a good bit of grumbling about her appearance on the Golden Globes telecast last month. She may have sold hundreds of millions of records, but a lot of very vocal people seem to be very sick of Madonna.

Ad Age has been working with Networked Insights, a social-media analytics company that advises brands and agencies on media planning, to track social sentiment surrounding Madonna. 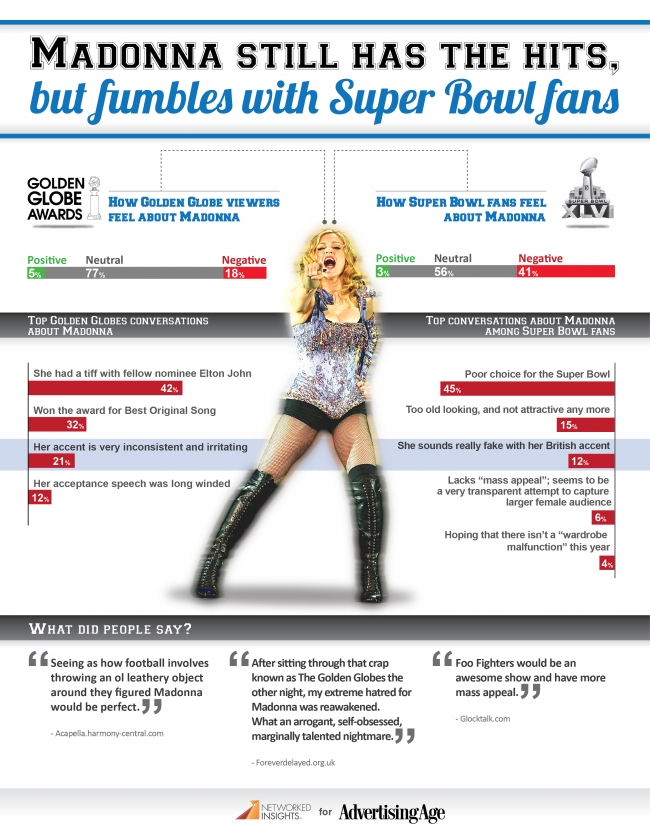 Some notes and context:

* "mobiles" pronounced with a British accent