Will Sponsors Play the Harbowl?

First, there were Venus and Serena Williams. Then Peyton and Eli Manning. Will NFL coaches Jim and John Harbaugh be sports' next big sibling endorsement duo?

When coach Jim Harbaugh's San Francisco 49ers line up against coach John Harbaugh's Baltimore Ravens at Super Bowl XLVII, they'll be the first sibling coaches to face each other in a major professional championship. But it wouldn't be easy for marketers and ad agencies to make either Harbaugh brother seem warm and cuddly. Both are so tightly wound it looks like their heads will explode on the sideline. And neither has the kind of boisterous John Madden-like coaching personality that appeals to Madison Avenue. 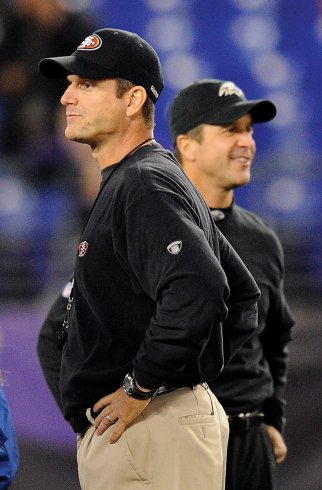 Sibling marketability: Jim (l.) and John Harbaugh could be a powerful pair.

That said, Jim Harbaugh already appears in an ad for Visa, glowering after he finds a fan delivering a motivational locker-room speech to his 49ers. And the normally intense John Harbaugh actually showed a playful side Thursday by sneaking onto parents Jack and Jackie Harbaugh's conference call with media and asking his mother: "Is it true that you like John better than Jim?"

Sister Joani Crean recognized her brother's voice and alerted Mrs. Harbaugh before she said something embarrassing. Team and marketing reps for the Harbaugh brothers declined to comment or could not be reached.

Together they could pull off the type of sibling ad campaigns done by the Manning brothers for Oreo, DirecTV and ESPN and the Williams sisters for Apple iPhone and Avon, say sports-marketing experts.

"If they appear as brothers, like the Mannings do, that could be great creative," said David Schwab, senior VP at Octagon, which links brands with celeb endorsers. "They're more powerful as a pair than they are individually. They would make more money, too."

Casting the brothers together in a TV commercial would be a smart play, agreed sports-marketing expert Robert Tuchman, president of Goviva. The brothers would be natural spokespeople for a wireless marketer looking to show how siblings on either side of the country stay "connected," he said.

In the meantime, they're doing plenty of marketing for the NFL, the savviest league when it comes to PR and image management. As if the Super Bowl needs more publicity, the league is playing up the sibling rivalry angle for the big game.

For the first time in Super Bowl history, the NFL is planning a joint press conference between opposing coaches. Jim and John will face the microphones together on Friday, Feb. 1, in New Orleans.

The NFL has also pressured an Indiana man named Roy Fox to give up his attempts to trademark "HarBowl" and "Harbaugh Bowl," ESPN reported. The league argued they conflicted with its own Super Bowl trademarks.

And if you're looking for sponsorship potential not named Harbaugh, Mr. Tuchman thinks a second Super Bowl ring could also generate ad offers for Ray Lewis, the Ravens' fierce middle linebacker and MVP of Super Bowl XXXV. Despite a checkered personal life, Mr. Lewis has deals with Under Armour and appears in a Visa spot this past season. Mr. Lewis is retiring after the game and will start a new career as a TV analyst on ESPN.