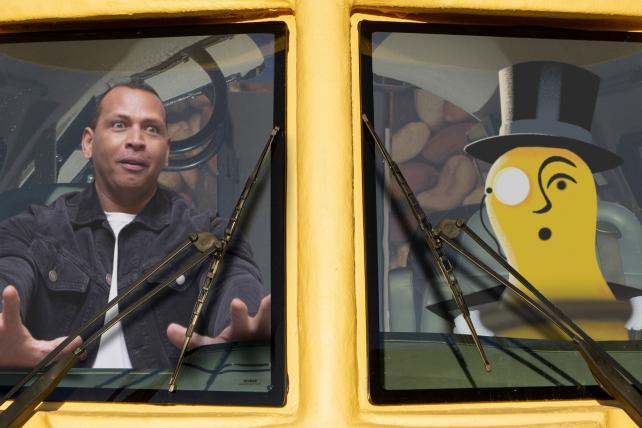 In a teaser released Wednesday, Rodriguez is shown catching nuts in his mouth, which it turns out are being tossed over to him by Mr. Peanut.

Planters previously announced it would return to the Super Bowl for the first time since its initial spot in 2008, but had not previously said which celebrity would appear. The brand said the ad is meant to show how far Mr. Peanut would go to give fans a snack.

"I've had a lot of experience coming through for my baseball teammates and my family in crunch time, but even I need help sometimes, too," Rodriguez, who retired from the Yankees in 2016, said in a statement. "That's where my guy Mr. Peanut comes in. He's there for me when I need a crunchy snack and always has my back."

The teaser was released two days after Rodriguez and Jennifer Lopez announced their 10-day no carbs, no sugar challenge to their fans on social media.

The celebrity couples' challenge ends days before the Super Bowl, so who knows, maybe Rodriguez will be shown eating some honey roasted nuts in the Planters spot.

Rodriguez, also known as A-Rod, previously appeared in ads for brands including Nike, Pepsi and video game Guitar Hero: World Tour. He admitted in 2009 to using steroids earlier in his career and in 2014 was suspended for the season. A-Rod was one of the game's most highly-paid players.

Planters' Super Bowl ad comes from VaynerMedia and is set to air during the game's second quarter.