Cigarette smokers braving New York's cold weather this week could be in for a surprise this week. E-cig brand NJoy has deputized a group of young women to call "penalties" on them for having a smoke. 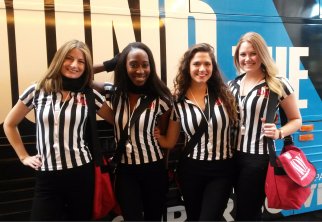 NJoy has tapped these referees to call

The women are dressed in referee outfits and touring high-traffic areas in a WestWood One radio network bus. When these pseudo officials come across smokers huddling outside, they hop out, blow their whistles and offer the smokers free samples of NJoy e-cigs.

It's part of a Super Bowl week campaign looking to capitalize on the influx of people descending on Manhattan and northern New Jersey. For the second year in a row, NJoy is also running a Super Bowl commercial in local markets.

E-cig brands are currently allowed to advertise on TV -- despite a more than 40-year ban on tobacco TV ads -- because they are unregulated by the Food and Drug Administration. That could change, as the FDA is expected to issue what are called deeming regulations soon.

The tour bus, part of NJoy's media buy with Westwood One radio network, has already visited parks and neighborhoods in Manhattan as well as Hoboken, N.J., according to Michael Fernandez, co-founder and owner of Factory 360, the marketing firm behind the experiential effort. The bus, which is traveling around the area this week from 10 a.m. to 1 a.m., will also pull up outside bars during the Big Game.

"What NJoy is trying to say is that we're always on the side of the smokers," said Mr. Fernandez. "It's the biggest game of the year. We don't want them to miss any bit of the action because they're going inside."

Although New York City has banned the use of e-cigarettes inside, the new law doesn't take effect until April 29.

Of course, the referees may not amuse embattled smokers left to shiver outside. But Mr. Fernandez said the refs are using their best judgment. "If a few guys are outside a bar and attractive ladies call a penalty, I think they're going to be more apt to let them interact," he said.

As the second-largest e-cigarette brand, NJoy plans to spend more than $30 million on marketing in the U.S. this year and more than $50 million in international markets, the company told Ad Age. Blu, the nation's largest e-cig brand, is owned by Lorillard, one of the three Big Tobacco companies in the U.S. Reynolds American and Altria have introduced their own versions to test markets in the U.S.

Sales of e-cigs were expected to reach $1.7 billion last year.