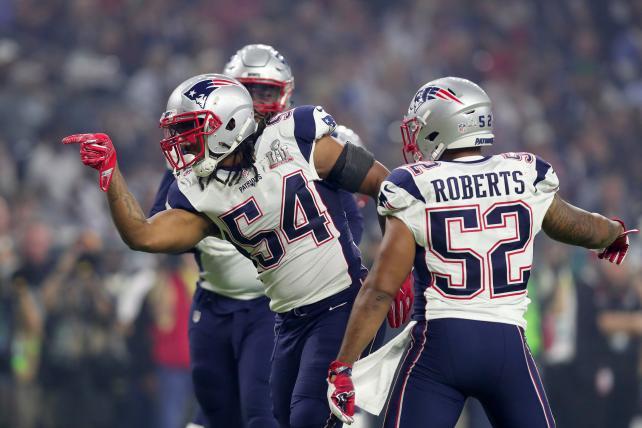 Dont'a Hightower of the New England Patriots reacts during the third quarter against the Atlanta Falcons during Super Bowl 51.
Credit: Tom Pennington/Getty Images

Just a few minutes after the second half of Super Bowl LI got underway, the Atlanta Falcons appeared to have broken the backs of the New England Patriots. Matt Ryan's six-yard touchdown pass to Tevin Coleman put the birds up 28-3 over a Pats squad that looked out of sync and wholly ineffectual. Uunderstandably, fans began to tune out.

While most viewers on Sunday night eventually found their way back to Fox as Tom Brady began to spearhead the single greatest comeback in Super Bowl history, the third quarter exodus -- preliminary results suggest that as many as 15 million viewers may have cycled out after the halftime show -- put a bit of a ding in the overall ratings. According to Nielsen fast national data, Super Bowl LI averaged 111.3 million viewers on Fox, tying it with NBC's coverage of the Pats-Giants rematch of 2012 as the fourth most-watched NFL title tilt of all time.

By comparison, last year's decidedly less explosive showdown between the Broncos and Panthers on CBS delivered 111.9 million viewers. NBC continues to hold the record for the most-watched Super Bowl, as its coverage of the 2015 New England-Seattle stunner averaged 114.4 million viewers.

While it is perhaps tempting to suggest that this year's ratings drop was a carryover from the NFL's regular-season woes, this assuredly was not the case. Whereas deliveries for the league's Sunday afternoon and various primetime slates fell 8% in 2016, this year's average Super Bowl draw was off less than 1% (0.5%, to be exact) compared to last season's Big Game and down just 2.7% versus the record-setting Super Bowl XLIX. That's a negligible decline, and one that's even less significant when streaming viewers and the Fox Deportes audience are factored in.

Fold in streaming via the Fox Sports Go app and Deportes' Spanish-language viewers and Super Bowl LI's overall viewership averages out to 113.7 million fans, which makes the Pats-Falcons game the second most-watched American sporting event since the dawn of a) sports and b) broadcasting. As one might expect, the most-watched quarter coincided with New England's overtime drive, as some 117.7 million viewers were tuned in to Fox when Pats running back James White rumbled into the end zone from two yards out to put the game away for good.

Per Nielsen, 172 million people watched at least some portion of Super Bowl LI, making it the most-watched program in the annals of TV.

Super Bowl ratings do not include out-of-home viewing, i.e., deliveries in bars, restaurants, gyms, hotels and other public venues.

While the overall audience for Super Bowl was predictably huge, the broadcast drew the lowest household rating since 2010. According to Nielsen, Sunday's blockbuster averaged a 45.3 household rating, which simply means that a little more than 45% of the 118.4 million U.S. TV homes were tuned in to the game. That works out to 53.3 million homes.

Super Bowl LI also notched a 70 share, which means that 70% of the TVs in use during the broadcast were tuned to Fox.

No Super Bowl broadcast has ever topped a 50.0 household rating, although San Francisco's first taste of the Lombardi trophy, back in 1982, came closest with a 49.1. The highest share of the active TV base was notched by the first Dallas-Pittsburgh classic, as Super Bowl X drew a 78 share.

Among local markets, Atlanta (57.0) ranked third behind AFC strongholds Pittsburgh (57.9) and Buffalo (57.2), while Boston was eighth with a 54.3 household rating.

Of course, while it's aways nice to lay claim to a new ratings record, Super Bowl ratings amount to little more than bragging rights. Not only are advertisers not provided a ratings guarantee, but the annual 10% price hike is now so automatic that there is no longer a direct correlation between the year-ago deliveries and the rates set when the next network in line begins selling the Big Game.