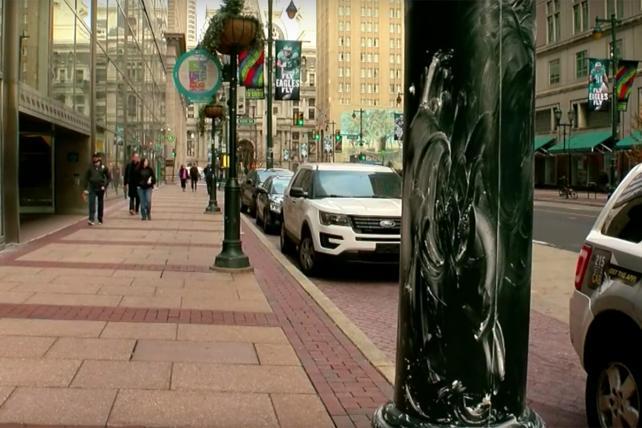 Crisco, whose social feeds are normally dominated by chatter about frosting recipes and pie crust tips, enjoyed a rare pop-culture moment Sunday thanks to the Philadelphia police, who used the shortening to keep Eagles fans off of light poles.

Still, the brand has not done much to seize on its fleeting moment of sports fame, which came after Eagles fans poured into the streets to celebrate a Super Bowl berth. For one, Crisco does not have a Twitter handle, or at least one that is used. Crisco did take notice on Facebook, however, with a post noting that "there are better (and more delicious) ways to use Crisco for game day!" But it got scant attention with only three comments and 25 likes as of early Monday afternoon.

Most of the social media attention came from the official Twitter handle of the Philadelphia police.

Now comes the time in the night where we must warn everyone about the dangers of Saturated Fats. Cheers for #Foles! Jeers for #Poles! It's a long way down, baby. Celebrate responsibly! pic.twitter.com/mES5MpPTY4

Plenty of TV news reports made mention of Crisco, too.

Of course, by pointing out the "dangers of saturated fats," the police tweet was not exactly ideal for the brand. But for a low-profile brand like Crisco, the axiom that "any publicity is good publicity" probably applies.

The brand enjoyed 22 times more digital content engagement on Sunday and Monday compared with the two previous days, according to Amobee, which monitors digital content. Amobee calculated that the two-day surge equaled what it normally takes Crisco five weeks to garner.

"The Philadelphia Police needing your product around the Eagles locking down a Super Bowl berth is the kind of exposure that a brand can't buy," says Jonathan Cohen, a principal brand analyst at Amobee. "That said, while a brand can't buy that moment, they can amplify it. A paid campaign by Crisco would solidify for a larger audience, the association between their brand and playoff football victory."

Rick Shea, a former packaged-food marketing executive and president of Shea Marketing, notes that "there are always potential pitfalls with event branding and public relations stories but for a brand like Crisco that no longer spends large amounts on advertising it's probably a good thing. Unlike advertising you can't control the message so the 'dangers of saturated fats' comment is the flip side of free PR."

Below, a sample of the Crisco chatter on Twitter.

It's the year 2018, and The Tide Pod Challenge is now replaced by the Crisco Pole Challenge

Crisco is essentially just cooking oil. It's flammable. They've lined all the light poles with it. In the city that loves lighting shit on fire after our teams win things? Tonight's gonna be wild https://t.co/t8AoW1U6dD

When you brought your @Crisco repellent to the @Eagles riot pic.twitter.com/tmVZd0Eo4P