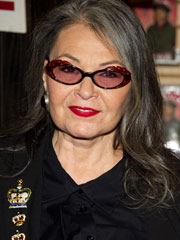 Roseanne Barr
Credit:
AP
The deadpanning comic and former blue-collar sitcom mom will star in Snickers' Super Bowl ad this year, replacing the universally loved Ms. White, whose appearance in last year's ad made it one of the most-heralded Super Sunday spots of 2010.

Candy giant Mars is sticking with the same formula, continuing its "You're Not You When You're Hungry" campaign that was launched with the Ms. White spot, which also starred Abe Vigoda. This time Ms. Barr will star alongside comedian Richard Lewis in a 30-second spot called "Logging" that will air in the third quarter.

The ad, by roster agency BBDO, New York, is Mars' only Super Bowl ad. The candy maker was believed to have wrestled with the decision on which of its two flagship brands to push, Snickers or M&Ms.

Debra Sandler, chief consumer officer for Mars Chocolate North America, told Ad Age that one reason the marketer went with Snickers is because the brand "does quite a bit with sports throughout the rest of the year. Out of all of our brands, it is the one that is probably most appealing to that particular target audience."

Asked if Mars sought to use Ms. White again, Ms. Sandler said last year's ad was a "magical moment with Betty and we obviously love Betty White and she was a fabulous spokesperson for the brand. But we felt that was a special moment in time and we didn't want to try and remake that moment."

Mars thought it "would be best to stay with the insight" of the "You're Not You" campaign, but "choose some new partners to convey that message," she added.

Ms. Barr has a tough act to follow, for sure.

Ms. White ranks No. 16 on the Marketing Arm's Davie Brown Index, an independent ranking that quantifies consumer perceptions of more than 2,600 celebrities. Ms. Barr, by contrast, is No. 610. She falls especially short in the "trust" index with a score of 39.74 (out of 100) to Ms. White's 74.41. (Who can forget Ms. Barr's horrifying rendition of the National Anthem in 1990 when she famously grabbed her crotch and spat?)

But Ms. Sandler said Ms. Barr scored well in consumer tests of the ad, adding that "we focus more on that than some of the external measures."

Marketing and branding consultant Chris Gretchko noted that the two comediennes share certain traits. Both are comedic icons who are "sassy in their own way," said Ms. Gretchko, a former account supervisor at Leo Burnett. "Betty White is witty and very sharp but not biting," she added. "It may be that Roseanne has another edge. If the message for the Snickers commercial is a little edgier and more irreverent, she could be a very good poster child for that."

Ms. Sandler declined to reveal plot details, but said the ad would employ similar juxtapositions as previous spots in the campaign, which feature regular people morphing into celebrities who embody weaknesses that Snickers overcomes -- like a football player "playing like Betty White out there" until he chomps on the candy bar. (Other ads have featured Aretha Franklin and Liza Minnelli.)

Last year's Snickers Super Bowl spot won USA Today's ad meter and sent Ms. White into the stratosphere, reviving a career that had been dormant. The former star of "The Golden Girls" went on to claim a supporting role in "The Proposal" and host "Saturday Night Live," in what became the show's highest-rated episode in 18 months.

Ms. Barr, who starred in the 1980s-'90s sitcom "Roseanne," is on a bit of a comeback tour of her own, making frequent media appearances as she touts her new book, "Roseannearchy: Dispatches from the Nut Farm," which the Salt Lake Tribute newspaper said is "full of f-bombs" and a "bathroom book par excellence ... bursting with personal anecdote rolled into opinion that can turn the tightest of corners into politics and policy recommendations."

Ms. Barr has also launched a bid for U.S. president and prime minister of Israel on the "Green Tea Party ticket." (We assume she's kidding.) During a recent interview on ABC's "Nightline" she ripped President Barack Obama, saying she preferred the public option health-care plan to his, which she called a "bunch of crap." And she took a shot at Sarah Palin and her blue-collar image, saying that "she's ripping off my act" and that "she's not even telling the truth to the American people. I think she took a lot from me and from my show, absolutely."