Previously known for taking jabs at big soda, the company is now trying to establish itself as sparkling-water brand 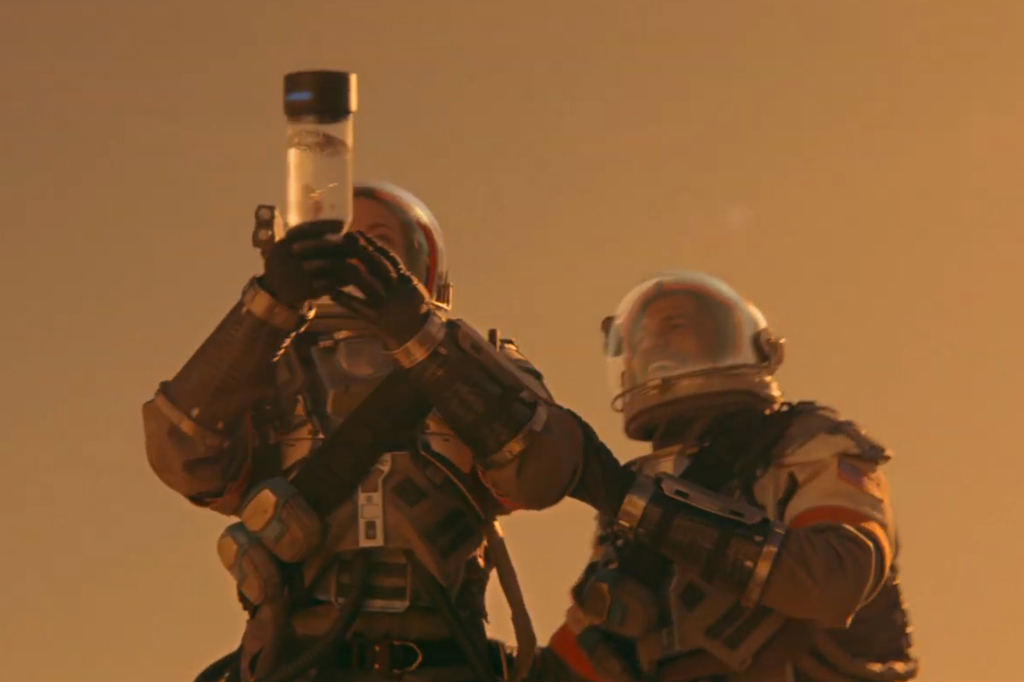 The company worked with Pepsi’s creative AOR Goodby Silverstein & Partners and Super Bowl veteran director Bryan Buckley of Hungry Man to create a cinematic epic about a mission to Mars. There are signs of H20 on the Red Planet, so a crew of astronauts sets off to investigate.

Their findings are a success: the explorers collect an entire vessel of Mars water. Around the world, the discovery is hailed like it’s the next Moon landing, with even Bill Nye The Science Guy (who appeared in the brand’s teaser) rejoicing.

Things, however, take a dark turn when a foreboding sound—something like a mashup of Darth Vader wheezes and alien hisses—interrupts the astronauts’ cheers just as they’re ready to head home. The source of the noise however, is perhaps more horrific than they imagined. Spoiler alert: a fellow crew member who was stuck back at the ship during the expedition has helped himself to their precious sample—which is now a fresh glass of sparkling water, courtesy of SodaStream.

The company debuted a 74-second version of the new ad today and will be running a 30-second cut after half-time, just before the third quarter.

It represents an evolution from where the brand was back in 2014, when it ran its last Big Game spot. That one, also directed by Buckley, starred Scarlett Johansson in a spokesperson-type role and promoted the brand’s environmentally conscious cred while also digging directly at competitors Pepsi and Coke (Fox banned that version, forcing the company to recut its ad in order to to air it in the game). It was a proven formula that followed its rejected ad from the previous year, which depicted exploding bottles of the big soda brands.

Since then, VP-Marketing U.S. Shiri Hellmann says Sodastream has repositioned globally from a “better way” to do soda to a sparkling-water purveyor—but those efforts still have a ways to go in the States. “It’s still a challenge so that’s why we decided to go on this huge stage to make sure our brand is being perceived in that way," she says.

The backing of its former target Pepsi, which acquired the brand for $3.2 billion in 2018, also raises the bar. “The purchase price set the expectation that this is going to be a growth brand, and the biggest growth opportunity is right here in the U.S.,” says SodaStream U.S. General Manager Bryan Welsh. “It’s forced us to think even bigger to accomplish our goals.”

To go big, SodaStream returned to Buckley, who’s famously known as “King of the Super Bowl” with more than 60 game day spots under his belt. He also just nabbed an Oscar nomination for his short film “Saria.”

“The stakes being the Super Bowl, we wanted to do something that felt epic and grand, but we also wanted to make it a story about water, which is a key ingredient to any SodaStream experience,” says Goodby Silverstein & Partners Creative Director Jon Wolanske. “The brief was basically to show this machine can make sparkling water in seconds. This was a fun way to deliver a demo that’s unexpected.”

As for what Buckley brought to the table, “he really pushed us to think bigger,” he says. “Maybe the audience would think it could be a movie, or a Netflix series—until the twist at the end with the product.”

In the new ad, the brand’s environmental message seems to take a backburner to the product offerings. The voiceover after the kicker explains, “Fresh sparkling water in seconds.”

“The need for social responsibility on plastic waste is rising, week by week, in importance but the biggest motivator behind purchase is still health and sparkling water,” Welsh explains.

Hellmann and Welsh say, however, that SodaStream’s environmental purpose remains core to the brand and will continue in its post-game communications. Copy at the end of the longform ad ends on an eco-conscious note and positions the brand as the way of the future: “By 2025, SodaStream will eliminate 67 billion single-use bottles on this planet. So we won’t have to go looking for a new one," it reads.