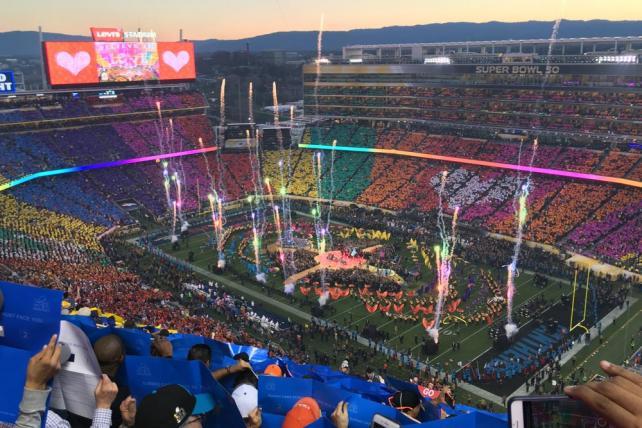 Super Bowl 50 was not exactly the glorious golden anniversary celebration for which the NFL had been hoping, but despite the sheer sloppy joylessness of the game -- even the Levi's Stadium turf was an unholy mess -- CBS came close to delivering yet another record crowd.

According to Nielsen live-plus-same-day data, the Broncos-Panthers gag reel averaged 111.9 million viewers, making it the third most-watched U.S. TV broadcast in the history of the medium. Super Bowl 50 beat out 47 of the previous NFL title tilts, lagging behind only last year's Pats-Seahawks thriller (114.4 million viewers) and Seattle's 2014 blowout of Denver (112.2 million viewers).

While the showdown between the creaky old gunslinger Peyton Manning and the all-purpose Swiss Army Knife that is Cam Newton never quite materialized, the CBS broadcast will handily beat everything else on the tube this year. By way of comparison, last year's broadcast of the 87th Academy Awards ceremony delivered 37.3 million viewers.

Boasting an average 46.6 household rating, CBS' coverage of Sunday night's comedy of errors now stands as the fifth highest-rated Super Bowl in the last 30 years. The all-time ratings record was set way back on Jan. 24, 1982, when CBS drew a 49.1 household rating with its presentation of Super Bowl XVI. At the time, a 30-second spot in the Big Game fetched $324,400 a pop, chicken feed when compared to this year's max of $5 million.

Of course, anyone who follows the ratings trends will recognize that the story is the more or less the same year after year; it's just the particulars that get swapped around. Since ABC aired its last Super Bowl back in 2006, the overall deliveries have increased every year but two -- as was the case with Sunday's broadcast, the blackout-delayed Ravens-49ers Harbaughfest of 2013 dropped by a margin of around 2.5 million viewers. Seven of the last 10 Super Bowl broadcasts have set an all-time audience record, and since 2010 anything short of 100 million viewers has begun to feel like a bit of a letdown.

For reasons that have been chewed over so many times before -- Super Sunday is basically America's greatest secular holiday (sorry, Thanksgiving), a day given over to football and consumption in equal measures, a moment in time when Eros, Thanatos and Mammon intersect violently on a 64" HD screen, and your only job is to eat junk and sit still for the commercials -- the NFL's annual capstone game is all but impervious to external forces. Unlike the World Series, which is beholden to market share, the Super Bowl puts up huge numbers with teams from second- and third-tier DMAs. Mush Denver and Charlotte into one weird teal-and-orange township, and you're still roughly one-third the size of New York, as far as total TV households are concerned.

But still. This game. By all rights, one could have expected a significant drop-off in viewership after, say, the fifth or sixth turnover, or following the fourteenth or fifteenth punt. This was less a defensive battle than a grim, mirthless exhibition of inefficiencies and seeming ineptitude; together, the Broncos and Panthers managed to convert on a mere four of 29 third-down attempts. And that's not even taking into consideration the bonehead penalties, the incessant ontological handwringing as to what constitutes a catch, and the creeping sense of malaise that comes from the realization that it's late in the fourth quarter and neither Cam Newton nor Peyton Manning have tossed a touchdown pass.

Perhaps we've been spoiled by a decade of helmet catches and Pete Carroll meltdowns and various displays of guts and grace, but when you look at it in the cold light of day, Super Bowl 50 was uglier than a freshly shaved PuppyMonkeyBaby wielding a meat cleaver at Coldplay. And despite it all, CBS can lay claim to bragging rights for having topped the all-time most-watched episode of scripted TV three times in the last seven years. (The Feb. 28, 1983, series finale of "M*A*S*H" averaged just shy of 106 million viewers, a record that would stand for 27 years until CBS' broadcast of Super Bowl XLIV, another game that featured Peyton Manning under center, scared up 106.5 million viewers.)

After the Lombardi Trophy was presented to the victorious Broncos, CBS threw to a special edition of "The Late Show with Stephen Colbert." The 68-minute episode drew 21.1 million viewers and a 7.9 rating among adults 18 to 49, edging the 20.8 million viewers/7.8 demo rating that CBS' "Elementary" delivered in its post-Super Bowl slot in 2013.